I got a comment on one of our YouTube videos the other day stating something to the effect of “my cat is a weirdo, she likes to poop outside of the litter box” – which reminded me to re-run this post. Many people do wonder why their cats poops on the floor next to the litter box. 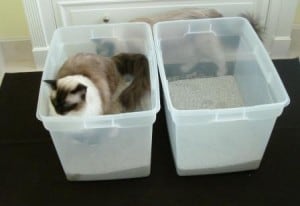 Why is my cat pooping outside of the litter box on the floor?

It is not uncommon for pet owners to be faced with the issue of a cat who will pee inside the litter box, but poop outside of it—sometimes even right next to it.  Below are a few possible explanations for this frustrating problem and some suggestions for how to fix it.

If you have solutions to offer that are not listed here, please share them in the comments.  I would like for this page to be a good source of reference for cat owners, so any additional insights are always appreciated.

All products featured on the site are independently selected by the editor of Floppycats, Jenny Dean. However, when you buy something through our links, we may earn an affiliate commission. You can read our full disclosure at the bottom of the page.

Cats Not Using Their Litter Box to Poop: Additional Solutions Why is my cat suddenly pooping outside the litter box?

If you have had success getting your cat to poop in the litter box using techniques other than these, please feel free to share them in a comment below!

September 3, 2016 “Dear Jenny,Several months ago I wrote to you about Mr. Bentley. At the time he was ten months old. When Mr. Bentley became a member of our family, he was so precious and still is.

The only problem we encountered was his bathroom habits. He urinated in the litter box (thankfully) but when it came to pooping, well he thought the floor in front of the litter box was the best place for that!!!!

So, I wrote to you hoping you would be able to solve that problem. You gave us several suggestions, but we had either tried those or they did not apply. Then I was reading one of the Newsletters and at the bottom, it had recommendations for certain products. One of them was “Cat Attract Litter”. We went to Petco and purchased a bag and tried it out. Well, I am so happy to report that Mr. Bentley has become a very good boy!!! For two months now he has had no accidents. Thank you, Jenny, for helping us solve our problem. We are a very happy family now!!!

Happy Parents”Want to learn more about our favorite litter boxes and must-have litter tools? Check out this page. And here are some more posts you might want to read:

Cat Poops Outside of the Litter Box – UPDATE!

was so thrilled to receive this email from JudyLyn.  If you remember reading about her troubles with her kitty Voltaire pooping outside of the litter box – many of you came to her aid with great suggestions. Here’s what JudyLyn has to say:

Seven days, NO accidents!  After taking all of the suggestions and information, it seems we have unlocked the mystery to Voltaire’s preferred litter box(es)!!  He prefers the clear box with LOW SIDES to poop, and the purple box with HIGH SIDES to urinate.  The 40 lb ExquisiCat Litter was purchased at PetSmart on sale for about ten bucks!

Van Gogh, who loves to dig, is just the opposite!  He poops in the purple box and urinates in the clear box….silly kitties!!!  They tend to use only two boxes; but, I set up the extra one as was suggested.  Let it be noted also, that I only put a thin layer of litter in the clear box…which may have been part of the issue for Voltaire.  He has never covered his poop, and I personally think he did not like the AMOUNT of litter I was using…. no matter, the combination of everything worked like a charm.

Thank you for restoring peace and harmony to my Ragdoll home!!”

14 thoughts on “Cat Pooping Outside of the Litter Box”