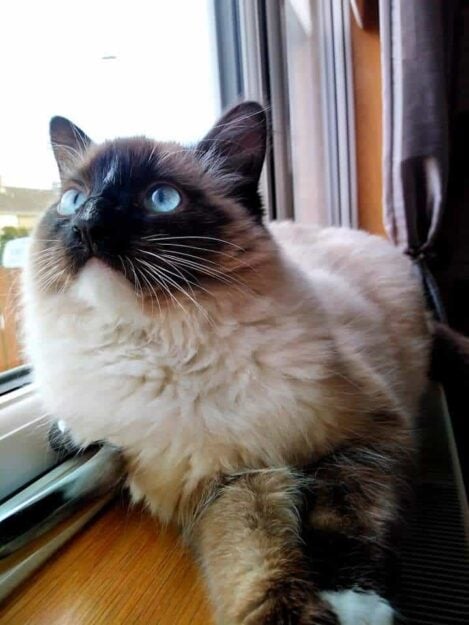 Well, this is Mocha, we rescued him from a shelter called The Lothian cat rescue up here in Edinburgh Scotland, his mother, unfortunately, passed away so that's why he was there. 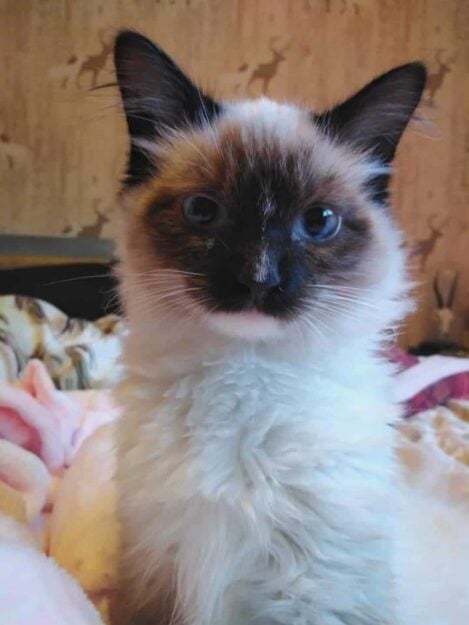 The reason we got him was that our last cat suddenly passed a year later, we were all heartbroken because she was growing strong, etc. My father then said we were not going to get another cat. 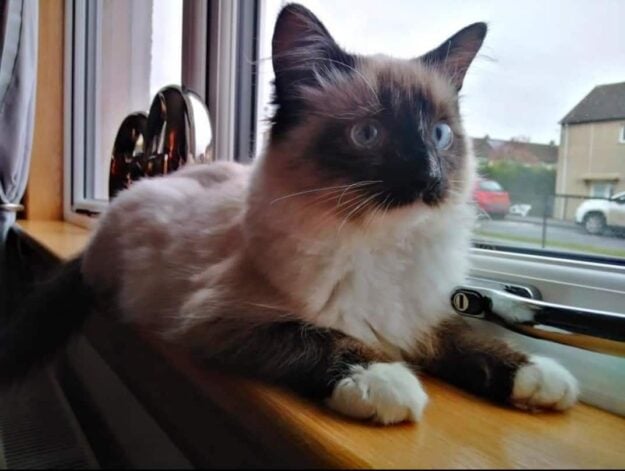 Well since I love cats and it had been about 5 months later, I phoned The Lothian cat rescue up again and explained what had happened and they said they had Ragdoll kittens, so I asked my Father and he still said No! Eventually my father caved in and we went to go see them and they were so cute! 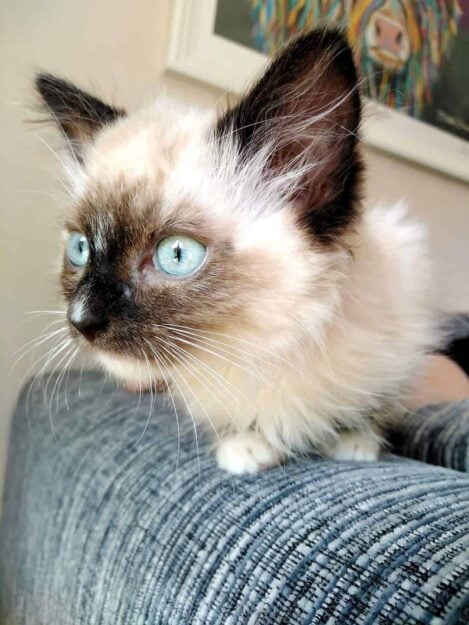 The One Who Purred:

The only three Ragdolls left were Mocha and his three brothers, the other two were a bit scared but we picked Mocha up and he was the only one that didn't hiss or scratch he just sat still in our arms and purred away. 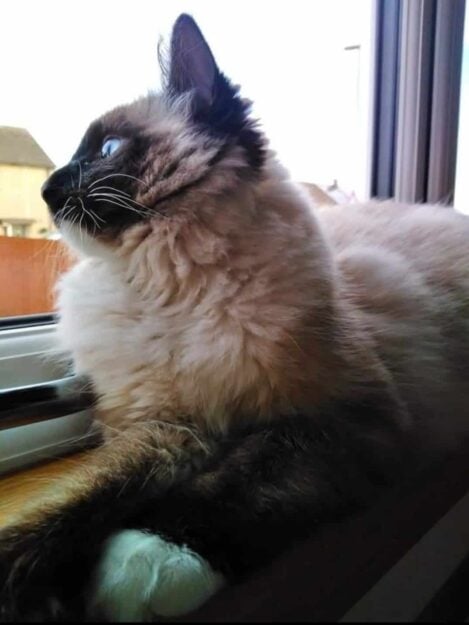 He is now 1 and half years old and we rescued him with his three brothers, they all got rescued too. He is a very happy cat and loves his home but he also loves to be outside. 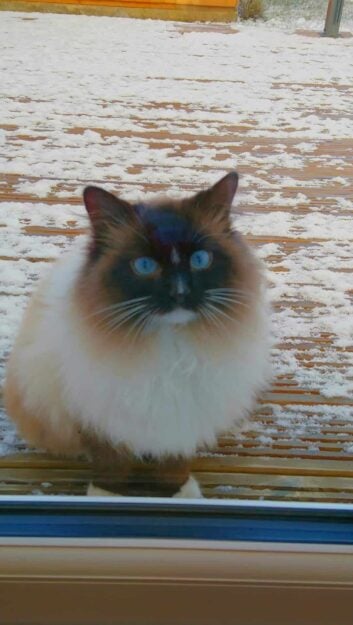 With all that fluff on him he always get things stuck to him so it's a big job trying to brush him.  He loves treats so every time he stays still to get brushed we give him a little treat.  The most loving part about him is when he talks, he just constantly talks when he wants in the house or going out to play. 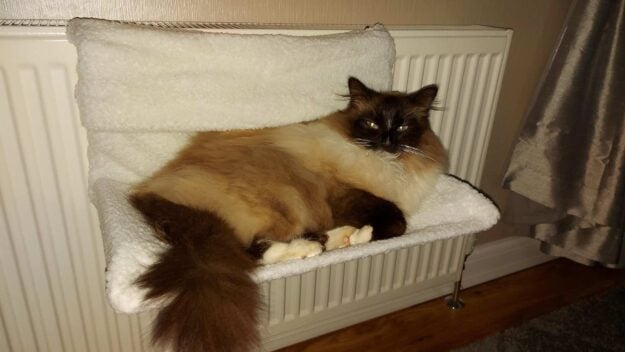 He already had his name when we got him but just before it we said we were going to name the cat mocha so it was perfect, he was very shy and scared when he was a kitten but so much better now, he loves to lie on radiators even though he has all that fluff !! 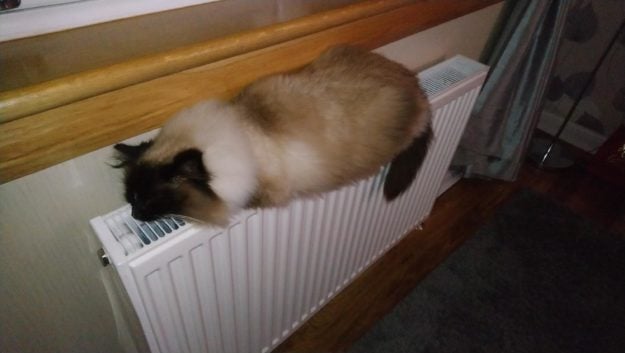 We recently bought him a radiator bed and it's his new favourite place, he also likes to sleep on the stairs so he gets in your way while trying to do the cleaning and if we are out fixing our old cars up, he likes to check on what we are doing and being very nosey, his favourite treats are from the supermarket here and they are like chewy sticks or little biscuits filled with cheese, he still takes mad turns and runs up and down the stairs. 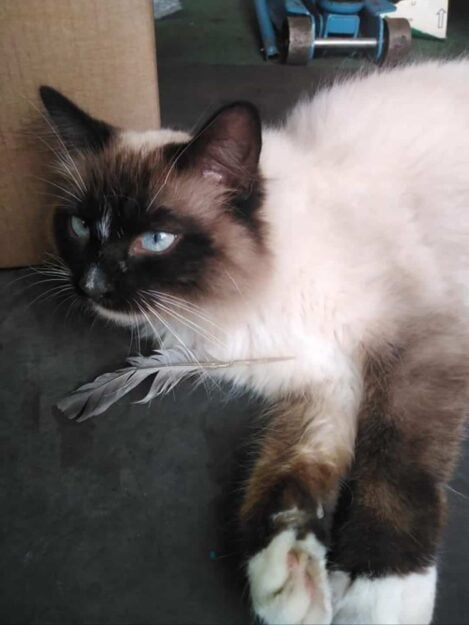 He will stay out for hours and hours exploring or playing with our neighbors' cats, we don't have any dog's but when Mocha sees a dog he will go straight up to them with his shackles up and tail all fussy so at least he is not scared. 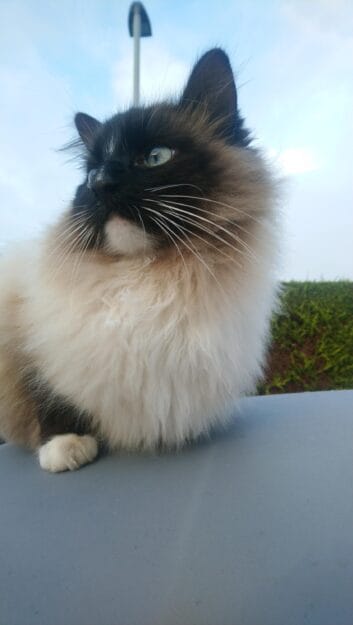 He is also a cheeky little monkey because he will already get his food and be fed but if my father has any food, he will sit on the floor and stare up at my dad and then he will jump up on the sofa and sit on my father's legs and just stare at him.  He does like a little cheese and a little yoghurt on a teaspoon. I hope you like Mocha's story.

Cocoa Ragdoll of the Week

If you have a Ragdoll kKitten story you would love to share please, submit your Ragdoll kitten story here.