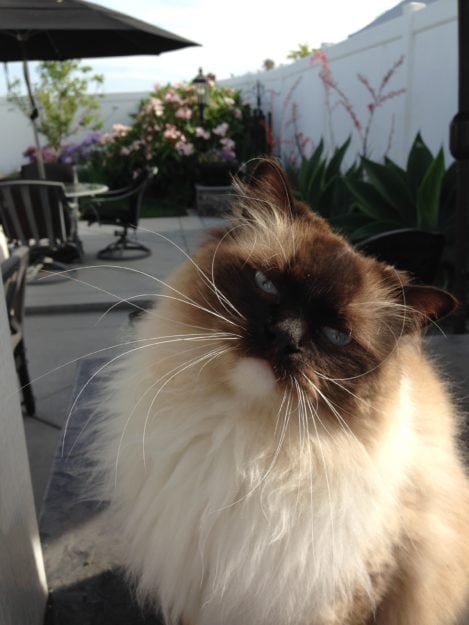 I love Cinnamon, my female seal-bicolor Ragdoll so much that I decided she needed a Ragdoll playmate. (Cinnamon debuted as Floppycats’ Kitty of the Week December 7, 2020).

And so the search for her playmate began. This time I was hoping for a seal-mitted kitten. I really liked the striking beauty of their dark brown faces I had seen in photos. 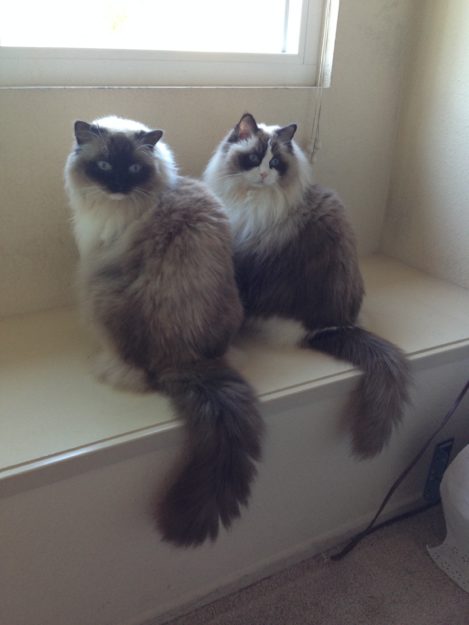 I contacted Cinnamon’s breeder, Stardolls Ragdoll Cattery. She had no seal-mitted kittens but one of her queens was carrying five kittens sired by her unproven seal-mitted. Of course, she could neither guarantee colors or sexes. I would have to wait but I definitely wanted a baby boy.

I resolved to patiently wait for the birth of the litter. Then, I received the long awaited call. Four females and one male had just been born. He’s mine I excitedly told her! When can I see him? I would have to wait awhile until it was safe to view the new litter which felt like an eternity. 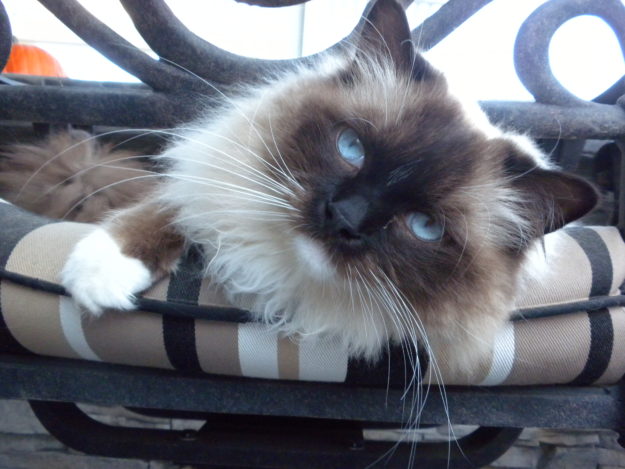 After many calls to check on my prospective kitten, the viewing day finally arrived and I had a good case of the butterflies on my way to meet my new baby boy.
The five precious bundles of white were having a great time playing with one another.

One in particular was a real energy bunny. Yup - that was my baby boy! I desperately wanted to know if he was going to be the seal-mitted I had my heart set upon. “Don’t know yet, still too early to tell”. So, more waiting before I could make my final decision. 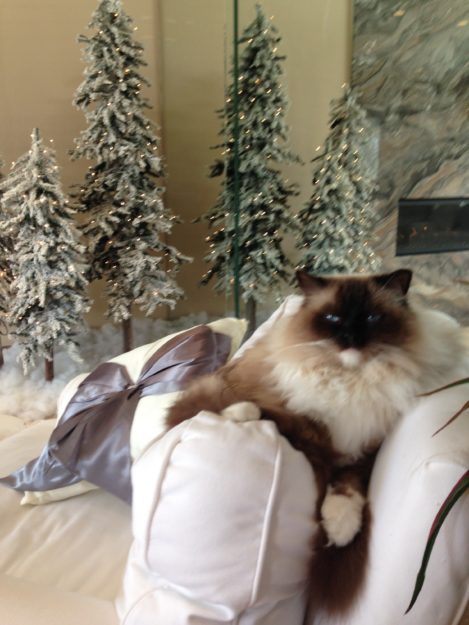 The stars were aligning when the breeder called to say that it appeared my baby boy may be a seal-mitted. And, another visit to see him. I had already fallen head over heels with his energy bunny personality and told the breeder I wanted him. He was my “little pepper” to compliment my girl Cinnamon, so I named him Cayenne on that very day.

Since he was going to be neutered, I requested that he be micro-chipped at the same time. Couldn’t take him home yet. More waiting!

I brought Cayenne home the long holiday weekend of July 4th in 2011. Oh, what a weekend that was! Cinnamon absolutely wanted no part of sharing me or her home with another cat – Ragdoll playmate or not.

I tried all the known successful ways to introduce an existing cat to a new kitten, and nothing was working. Cinnamon made it crystal clear to both the kitten and me that this new playmate was not welcome.

The long holiday weekend felt even longer. My gentle loving Cinnamon was so anti-playmate she was even lashing out at me. I gave up - I couldn’t put her through this anymore, so I put Cayenne and his carrier in the bathroom and I sat on the floor outside the closed door in tears. What had I done? My kitten was frightened and Cinnamon was stressed. I had to take him back. The many calls to the breeder that holiday weekend all went unanswered. 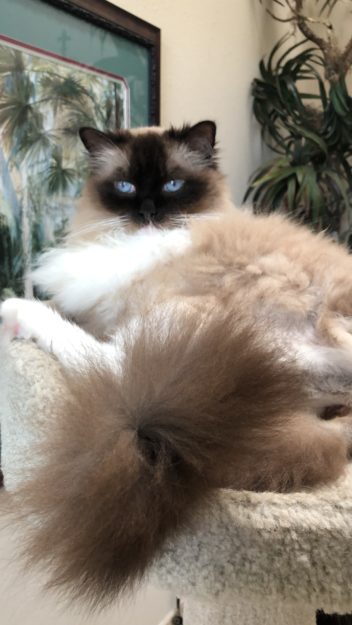 I kept checking on Cayenne and would find him not in his carrier but curled up in the bathroom sink. He’d greet me with a very soft meow when I opened the bathroom door and purred when I held him. It tugged at my heart.

How could I take my precious baby back to his breeder? What a dilemma. I attempted one more introduction – OMG it worked! And so, Kitty Kitty Cayenne had a new and loving home and Cinnamon became his mentor. I have what my mom would affectionately refer to as “the spice kids.”

When Cayenne was around age three, I purchased one of those adobe pots with the cups on the sides for growing strawberries. My plants were thriving with lots of delicious berries for my morning cereal. Then the birds found the berries or at least that was what I thought. 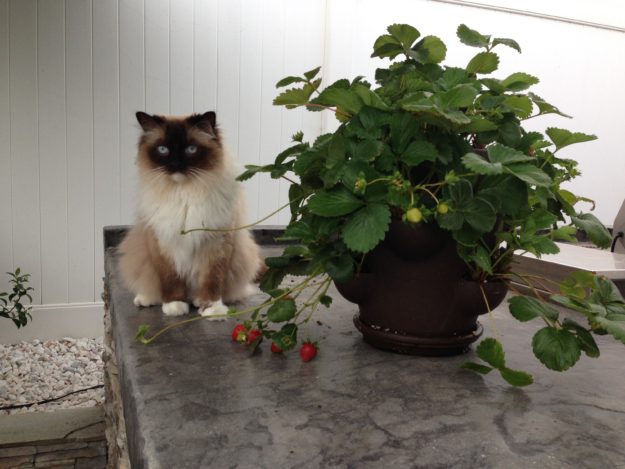 Truth be told, I caught Cayenne “red handed” enjoying the strawberries right off of the plants with a look as much as to say, “who me?”

Here, I thought he was making a beeline for the outdoor kitchen island to soak up the California sun. Oh, he was soaking up the rays, but also enjoying the juicy ripe berries. 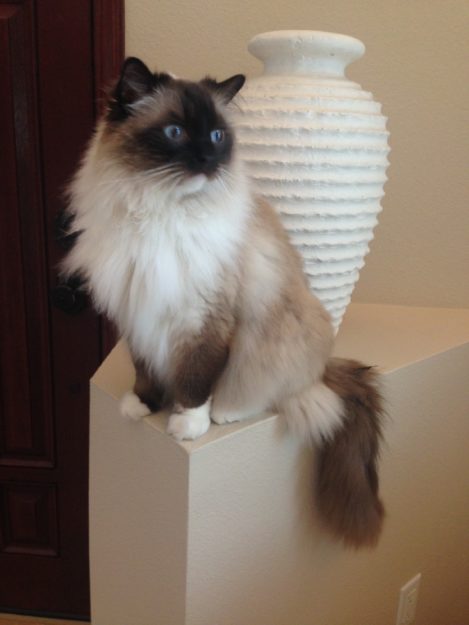 Cayenne has grown into a handsome little man. Well, really not so little. More like a fourteen pound armful of plush. And, oh those big blue eyes that he blinks ever so slowly- blink, blink. I read somewhere that those slow blinks are kitty kisses.

I can get him to blink if I slowly close and then open my eyes when he is looking at me. He has the longest whiskers I have ever seen on a kitty and great big paws that go plop, plop, plop when trying to catch his laser light. 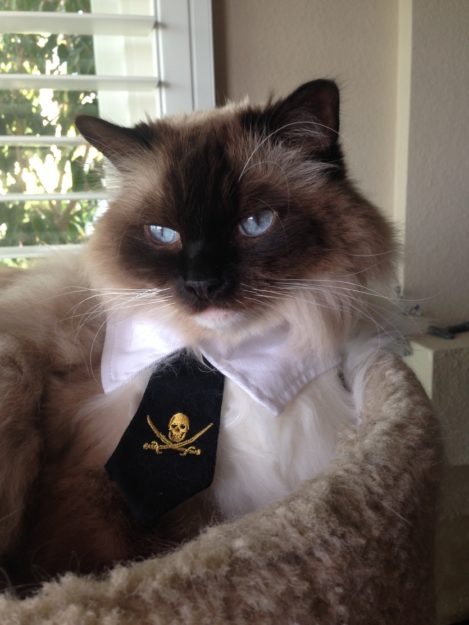 Cayenne is nine and a half years old now. He developed urinary problems at age four and was in and out of the vet office. Then very late one night last year he was streaking through the house crying. I whisked him off to the pet ER and I was told he was critical. He was blocked. The staff would do all they could. I was allowed to visit him twice a day in the ER ward. Thankfully, after four long days he was discharged with meds. He was diagnosed with cystitis, and crystals in his bladder and urethra.

The ER told me that it might happen again. Oh great!

And it did - two weeks later around midnight. Why does this stuff always happen late at night? This time I took him to a pet ER closer to my home. The vet told me that with so many recurring episodes of the problem I may want to consider “the little boy cat surgery” in professional terms, perineal urethrostomy. 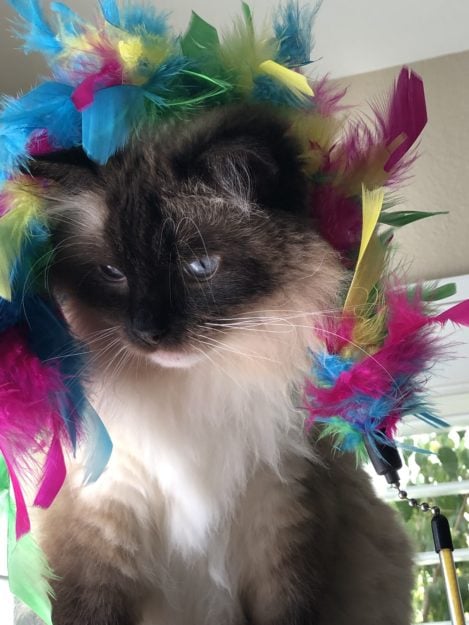 She could start the surgery within the hour. As agonizing as it was for me to subject him to surgery, I knew I didn’t want my beautiful boy to continue to suffer. His surgery was a success and with two weeks of meds and loving care at home, he recovered just fine.

Even though my kitties have a ceramic water fountain on each level of the house, Cayenne has never consumed much water. So, along with his strict diet of canned Royal Canin Urinary SO prescription diet, a bit of bottled Dasani water is added (only the best for my baby boy) and we are recurrence free, to date.

Both Cinnamon and Cayenne were dry food junkies.

After reading “Feeding Your Cat: Know the Basics of Feline Nutrition” by Lisa A Pierson, DVM, catinfo.org, I recognized that the Royal Canin dry kibble their breeder had encouraged me to continue feeding when I brought them home was not preventative nutrition and appears to have predisposed my Cinnamon to her diagnosis of IBD and PID, along with suspected small cell lymphoma of the spleen and Cayenne developing urinary tract disease. Hindsight is truly 20/20.

It was challenging to get them 100% off of dry kibble and I’d like to take it a step further and switch them to a raw diet, but I’m not certain if introducing a raw diet at this time will “upset the apple cart” considering their current health challenges. I will explore that option with their vets at their comprehensive health checkup next month. 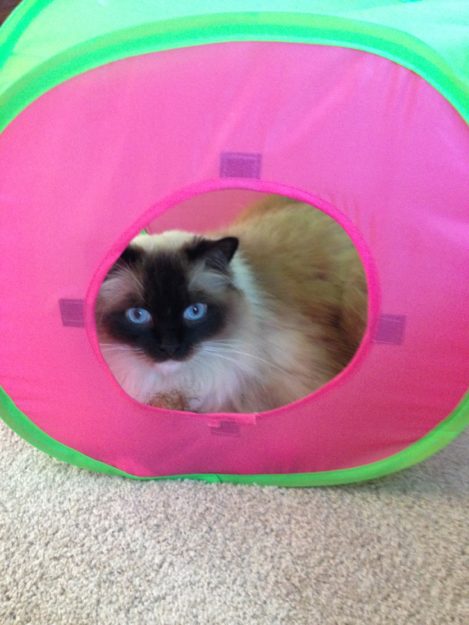 Cayenne is a gentle sweet kitty who loves to bunny kick his Yeowww! catnip banana, napping with his front feet shoved in the toes of my empty shoes, and getting all toasty stretched out in front of the fireplace.

He gets the zoomies at least once a day through the house, across the second floor bridge and up and down the stairs. He is famous for sneaking past Cinnamon (after she has fallen asleep in the doorway guarding my bedroom) and then jumping on the bed to sleep with me.

Cayenne has a dense plush coat and loves to be brushed, have tummy rubs and paw massages and purrs like it is a secret. He is not chatty but when he does meow he sounds like a kitten. He is very polite as he waits for his meals and I have trained him to say please (meow that is) when I tell him “say please Cayenne” before placing his dish. 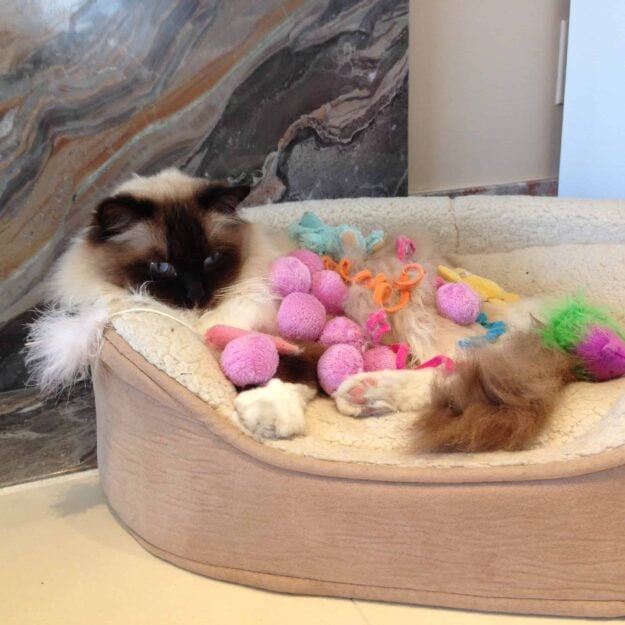 Cayenne gets fed up with Cinnamon’s alpha cat nonsense followed by a dust up. Although he isn’t fond of being held, he will tolerate it for a couple of minutes, if I’m that lucky, and we end those brief but enjoyable (for me) moments with my kissing him and telling him he is my handsome little man and that I loved him before he was even born.