I recently acquired Daisy, a 7-year old retired breeding female Lilac Lynx Point mitted Ragdoll from a breeder in Wisconsin called SpringValeDolls. I always thought “mitted” meant that all four paws were white, but Daisy only has white mitts on her rear paws. The breeder said all of Daisy’s offspring were 4-paw mitted, and because of Daisy’s rear two, she is categorized as mitted.

Sadly, I had to euthanize my 20+ year old rescued Blue Point Ragdoll named T.C. (Tuna Cat) on January 22, 2021. T.C. was previously featured as a Ragdoll of the Week.

I had never actually visited an actual breeder before, and it was quite a sight to see 25 or so gorgeous adult Ragdolls in one place. There was a separate building for the adult cats, and the kittens were kept in the house.

I was casually browsing the internet to see if there were any Ragdoll breeders in Wisconsin, and this breeder happened to be about an hour away.

Daisy was born 9/20/2013 and weighs 9 lbs. 8 oz. My feeling is that she has been pregnant and / or nursing for a significant portion of her adult life, and has never had the opportunity to be a pet.

She is loving human interaction, as it turns out she does not particularly like cats. She got in swatting matches with several other Ragdolls while I was visiting, even sparring with some of her own offspring. 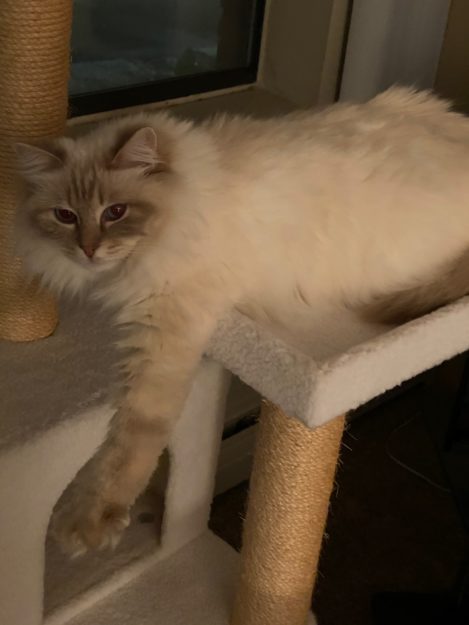 Way back in the early to mid-90s, when our daughters were very young, I decided on a whim to see if any kittens were available in the local newspaper classifieds. There was an ad for Burmese / Ragdoll mix kittens, and since my in-laws had a Burmese that I absolutely loved, we acquired a brother and sister from the Burmese / Ragdoll mix litter. They turned out to be fabulous cats and had the “going limp when held” characteristic that Ragdolls are known for. That was my initial introduction to Ragdolls, even though they were of mixed origin.

The breeder named this cat Daisy, and I decided I was OK with that name, even thought it lacked the pizzazz and creativity of a name like “Tuna Cat.” 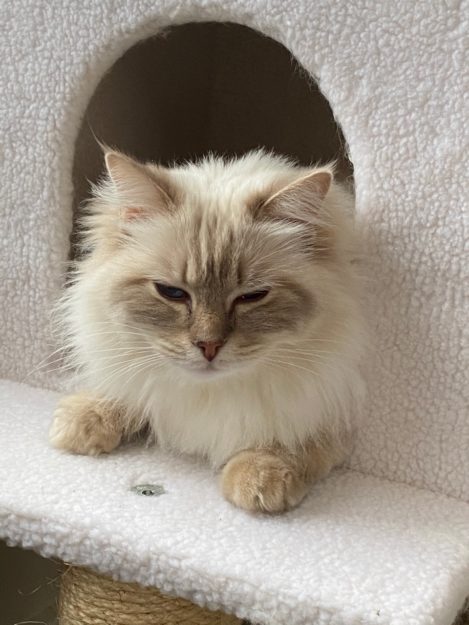 Daisy loves to snooze on her cat tree, and she often snores like a drunken sailor while sleeping. She also enjoys sleeping with me at night, always stretched out on a big down comforter.

She gets the zoomies fairly frequently, and always gets them after exiting the Litter Robot. It’s pure entertainment to watch. She’s figured out where she can strategically slide on tile floors while zooming. She’s also fascinated by the Litter Robot, and has to go watch it every time it cycles. 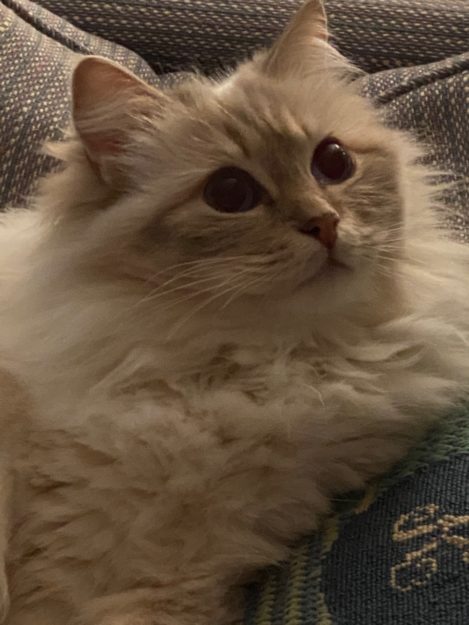 One of the most unique things about Daisy … we have all seen and watched cats make biscuits … but Daisy makes more biscuits than any cat I have ever seen, and I’ve had cats for 63 1/2 years (I’m dating myself.) When I hold her in my arms on her back, she constantly makes biscuits “in the air” while not actually making contact with any other objects.

Daisy is extremely soft! We have been to the vet for an initial checkup, and even the vet said Daisy has the softest fur she’s ever felt. And this vet sees cats day in & day out!

The breeder sent home a bag of toys and food that she always does for new owners, and two of the toys were just coiled pipe cleaners. I didn’t think much about them at the time, but they are Daisy’s favorite toys. She bats them around all the time. They are great toys. Quiet on hard surfaces, and easy to reshape around a pen when Daisy manages to straighten them out. 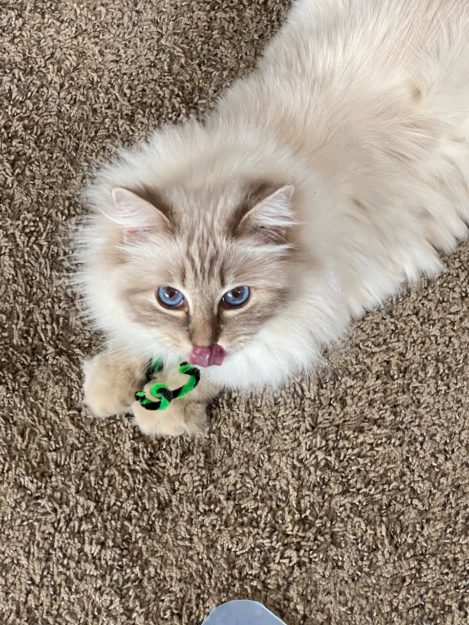 I have a bin for all her cat toys, but she dives into the bin and after wrestling around with the “Yeowww” catnip banana for a bit, she grabs one of the pipe cleaners, exits the toy bin and goes wild with it. They are very easy for a cat to carry. I think that might be part of the appeal.

Finding a favorite food for her has been a bit of a challenge thus far, I’ve had her for less than 3 weeks. I took Jenny’s advice and got a Weruva variety pack from Amazon, hoping to hit on a favorite flavor, and we seem to have a winner with Weruva Truluxe Kawa Booty. It’s Kawakawa (or Mackerel) tuna in gravy. Daisy is all over that one, so I have since ordered a case of it just that flavor. 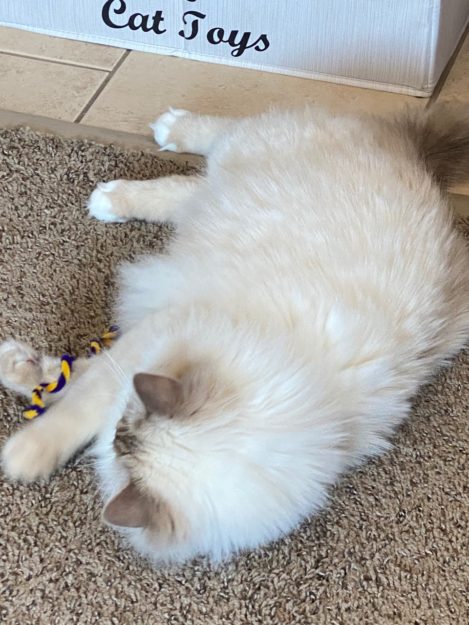 Though I know I run the risk of Daisy getting tired of it. I do have a huge variety of cat foods to try, so I will keep trying.

I am lucky enough to live on a lake, and my window sills are 8 inches wide, so it’s a perfect viewing platform for Daisy to perch and watch waterfowl and squirrels when she is so inclined.

I can’t tell if Daisy dislikes being combed, but whenever I try and comb her, she thinks it’s playtime and attacks the comb. Somewhat frustrating. She is also not a big fan of having her claws trimmed. I have to wrap her in a big bath towel and work on one paw at a time that I manage to extract from the “cat burrito.”

I’m not sure if I got Daisy too soon following the passing of my beloved Tuna Cat, but she was just too beautiful to pass up. I think we are going to have a great life together. I know I will give her the best life that I possibly can. I can’t wait to see what she thinks when hundreds of Canadian Geese gather outside the windows.

2 thoughts on “Daisy – Ragdoll of the Week”