I rec'd the following inquiry from Ashley, owner of two 1-year old Ragdoll cats, Briggs and Mitt.  I am posting this message with Ashley's permission to see if readers have greater insight on how to help. 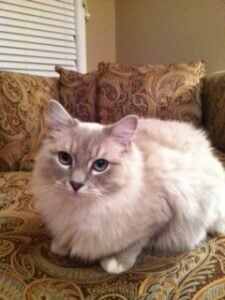 I've asked for your help with one of my now 1yo male Ragdolls who has a sensitive stomach.  It has taken almost 10 months to stop the soft/runny poos.  After talking to Holly Jacobs and discovering that he cannot have chicken or salmon in any foods (which significantly limits what he can eat), I have began feeding both of my Ragdolls 2 cans of wet food with just a little dry food for snacks when I'm not home.  My greatest fear is that I'll be stuck somewhere, and they'll be hungry.  The one with a sensitive stomach, Mitt, is also infamous for not peeing much at all.  Before the wet food, he would go 24-36 hours between pees.  In the beginning I was able to put quite a bit of water in his wet food, but he has rejected that.  I think they would probably transition to all wet food fine, but I have one major concern... How do I ensure that each cat gets enough wet food?  Neither one will eat a whole small can at one feeding.  If I leave the remainder out, Briggs is more than likely to eat Mitt's leftovers.  Mitt is the one who desperately needs the additional moisture.  He will not drink water. 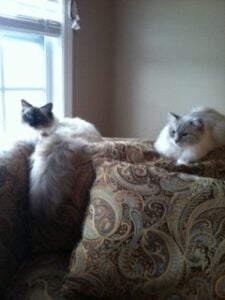 Mitt and Briggs are from the same cattery.  When I got them, the breeder said to feed them Royal Canin kibble. She also said Ragdolls don't do well on wet food.  Since then, she now feeds her cats Life's Abundance.  So, for feeding, I feel like I'm on my own.  I have tried several different dry foods for my problem boy, Mitt.  When I switched to the higher end foods without grains, he drank less water than he ever had, which was not much to begin with.  I assume it's because the better foods have less sodium which decreases thirst drive.  Briggs has basically done fine on all foods and continues to drink some water.  He also pees at least 2 times a day.  Mitt, on the other hand only pees once a day (if that).

After reading everything I have about the dangers of dry food, I think wet food is probably the best option.  However, my complicated Mitt has had an allergic reaction to something.  He gets itchy bumps on his genital area.  The first time it happened the vet gave him a depo injection. He responded quickly (and I thought it was a done deal).  About 7 weeks later, 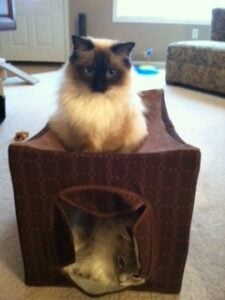 Briggs on top and Mitt inside

the bumps returned.  He had another depo injection, but it didn't agree with his system.  Even though it is a steroid (which is just for animals), he had much less energy, hunger, and thirst drive.  It took about 4 weeks for him to return to his old self.  Since I don't know what is causing the bumps, I'm terrified they'll come back.  And, he can't have chicken or salmon in his food.  In addition, both boys only like minced/sliced canned foods.  They dont like pate texture.  I'm very limited as to what I can feed them.  It's basically Wellness Tuna Pouches and Wellness minced and sliced turkey.

I am consumed with making sure Mitt is eating, getting enough water, and peeing.  I feel like I can't enjoy them for the constant worrying.  Any advice would be greatly appreciated.

I'm just at a loss and desperate for them to do well so I can love and enjoy them.  The worrying is tearing me down.

Thank you for your help!