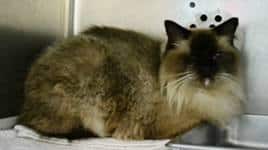 Three years ago, I received a list of cats in danger at a New Orleans animal shelter. The rescuer who sent me the list wanted me to look at a stunning cream Maine Coon, but I saw the Flame Bi-Color Ragdoll and his one-eyed Seal Mitted Ragdoll brother. They were nine years old, an age that is always in danger at any kill shelter. I quickly messaged the shelter and told them I would take the Maine Coon, but I wanted the Ragdolls as well.

Transport delays caused the brothers to be stuck in the shelter for another month, and I was terrified something would happen to them, but finally, all three arrived safe and sound at my house. I was immediately enchanted with George, the Cream Bi-Color and his winning ways, but this is not George’s story. This story belongs to Odin.

Odin and George were left at this high kill shelter when their owner found himself homeless. The very tragedy of their story made me love them from the very beginning, but our relationship was not without problems.

Unlike George, who immediately settled in and made himself at home, Odin, previously named Popeye, was terrified at my wild and furry house. Merlin’s Hope Ragdoll Rescue, my rescue, operates out of my home, which acts as a foster home for all the incoming cats. It is often noisy, chaotic, and somewhat like a daycare for cats. Where George reveled in the attention from the other cats and from me, Odin hid.

The only time I ever really saw him was when he was cuddling with his brother. It soon became apparent to me that George had fallen in love with my grumpy old girl, Nimue, who had never had a feline friend. Before this, I was her only friend, despite the fact I had seven cats at the time. I couldn’t possibly let George leave when they were clearly in love, and at 17, Nimue deserved to have a feline friend.

The decision was made for them to stay, but the question was whether this was in Odin’s best interest, too. I decided it was, and I decided that Odin was going to be happy, whatever it took.

First, we had to rename him. Yes, Popeye makes sense as a name for a one-eyed cat, but I just couldn’t live with that name. Odin quickly became his name, and it fits him so well. He is such a regal, wise-looking cat with a lovely goatee and prim white toes.

It took Odin a long time to settle in. I coaxed him from the loveseat in the living room to my bed by putting a heated throw at the foot of my bed. Coming from New Orleans, he is always cold here, even though our part of Texas is quite warm. In fact, one of the ways I won his heart was with our completely enclosed outdoor cat area. He loves to go lay out on the shelf and bathe in the sun. Odin still loves nothing better than to lay in the sun all day. 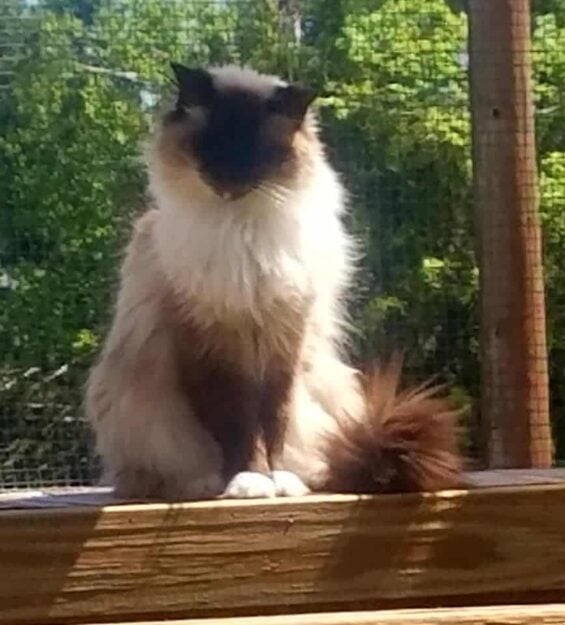 Then, I discovered that he was losing weight and rapidly; a trip to the vet showed that Odin’s mouth was completely inflamed due to stomatitis. Medicating him and taking him in for a painful dental that resulted in seven extractions did not make me his favorite person, but he soon forgave me when we discovered how much he loved the special pureed food I found for him.

Over the past three years, Odin has settled in more and more, and after I lost my beloved Prince Charming, Odin took on the special job of cuddling with me when I sleep. After Charm died, I told my boys that someone had to step up and take Charm’s place as my night-time cuddle buddy. Fortunately, Odin discovered that was his place. 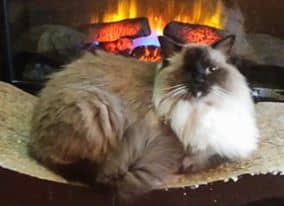 Since that time, Odin and I have bonded, especially since we had to make a crazy trip across Texas to s a special vet to have yet more teeth pulled. Staying together in a hotel room for two nights—just the two of us—was so wonderful.

He still has moments where I think we are just too wild, too crazy, too much for him, but special beds, special treats, special private time with Mom helps. He may be not be a Texan by birth, but he is definitely my New Orleans boy. 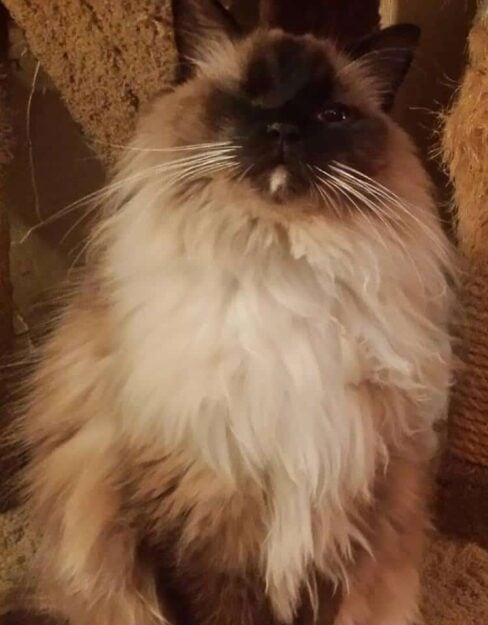