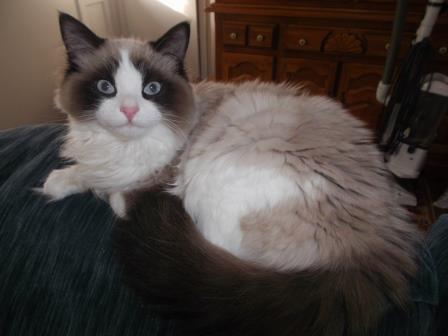 Charlie and Trigg have played with hair ties on and off for some time, but I did not know of their danger until the other night on Facebook when a reader posted about her Ragdoll kitty swallowing a hair tie.  I did not think they would actually eat them - however, I also just learned that cats can't spit out things - due to the barbs on their tongue, there is only one way for items to go - that's down.  So cats do eat hair ties and they end up in their stomachs and can cause serious medical bills and death.  Unfortunately, Karen had to say good-bye to her Sylvia in this way.

My heart just breaks for Karen and Oliver!  I will definitely not let Charlie and Trigg play with hair ties anymore.

"Sylvia, my ragdoll, is in the hospital. With that stuck in her stomach/intestines, nothing is moving. Have to make a decision, go ahead with a 50/50 surgery or let her go. There is a doctor there they maybe will take her if I sign her over. So now I have to decide what to do."

"they did the surgery, and she swallowed a hair tie. perforated her stomach and stretched to her colon. they had to put her down. i thought she'd make it. brokenhearted. thank you. now i am paranoid. i have hair ties here and there. I have a male Ragdoll, Oliver, her brother. I got them both together. here is her 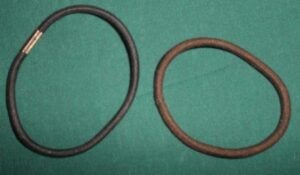 Here is a hair tie, one with metal one without. think the one without because vet did not say metal or mention it.

picture the bicolor on the left. oliver is the seal point next to her. never thought of that with hair ties. i wear pony tails and so does my daughter, granddaughter. we thought it was a plastic rubber bracelet."

"Vet said that the hair tie rubber was like in bits thru her and the cloth was intact thru to her colon keeping them together and like stuck in stomach. she would vomit bile and clear at times violently. at first vet visit and second, they gave her IVs and cat lax and anti vomit stuff. This vet did not have an x-ray and said we needed to go to another one he recommended, she improved it seemed, but it must have been the fluids being dehydrated. couple days later i called and said she is worse, so went into another place for x-rays, and then surgery. they closed her up and said didn't want to put her thru anymore since the stomach is perforated and another spot if i got them right."

"They did just put her to sleep instead of putting her through all this. They were afraid she would get Septis, that poison that goes thru the body from the damage in the stomach. I wish I would have just went and got the x-rays at the place the Vet recommended, but we just went with the fluids and cat lax and anti-vomit medicine. Not realizing what she swallowed. This vet had no x-ray machine. So the key is"get an x-ray...don't wait until the damage gets worse. The Vet even said maybe it's the flu. She did get better for a couple of days and was even purring again."

This is Penny Lane (she died 2 months ago old age) Oliver in the middle, Sylvia to the right