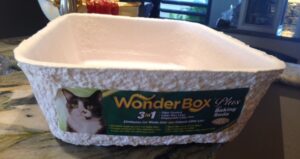 A reader wrote to me asking me if I knew about the WonderBox Disposable Litter Box and Liner and that she buys them at Publix for $3/ea and just loves them. I did a quick Chewy search and found them on Chewy.

Here's what Chris had to say: 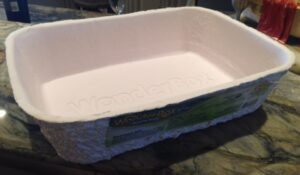 "These are $3.00 and last for quite a while. They are made of old newspapers and baking soda for odor control. I was using a plastic liner in the litterbox in the first week when we first got Widgy but the smell was worse than it is with this box. I have only used two as we have had him for 5 weeks. I put it in the real litterbox and then just pick it up and throw it out. I saw some today at Petco that I believe were the same dimensions(approximately 9.5 inches x 14 inches). They are three for 13.95, which is more expensive. Since I have the box in the master bath and when I go, Widget goes, I can scoop it out very often. Just wondering if you know anyone else that uses these. These are sold at 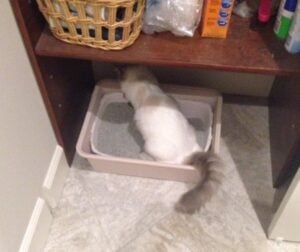 our grocery store, Publix and are sometimes on sale for $2.50. The only downside is obvious. Widget is over six pounds and is a little over 4 months. He will soon be hanging over the box. But you just throw it away. No washing. We will deal with this when he gets too big. Just thought you might know about these. thank you for all that you do and happy birthday to Murphy too!!! Chris Chocallo Sarasota FL ps these would be good for traveling."

If you want to try them out and don't have a Publix or don't want to go to Publix you can order a 3-pack of the WonderBox Disposable Litter Box and Liner here.

Do you have experience with these disposable litter pans? How do you like them?