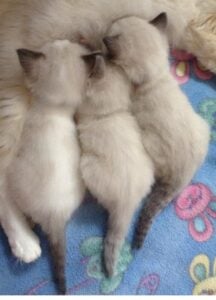 This is a question a lot of people interested in adopting a Ragdoll cat ask. Many people say that male Ragdolls tend to be sweeter, but plenty of owners of female Ragdoll cats would say the opposite. A good rule of thumb is that it’s not about the sex of the cat, but the personality in general, so the best question to ask is whether the Ragdoll cat breeder has any insight into the kitten’s personality. Here are a few thoughts Ragdoll cat owners have shared on the male vs. female kitten question:

Overall, the Ragdoll cat temperament tends to be friendly and affectionate in both genders, though it really just depends on the personality of the individual cat and the love and trust they develop with their owner. Try to focus on getting to know a kitten’s personality when you’re thinking about Ragdoll kittens for adoption, rather than relying on gender as an indicator of what they will be like.

What experiences have you had with male vs. female Ragdoll kittens?