Will My Cats Use the Litter Robot 3 Open Air?

One of the concerns I get from readers when they are considering buying a Litter Robot Open Air, is whether or not their cats will use it.  Litter Robot provides detailed instructions in their welcome kit (included with the litterbox) about how to approach the introduction process.

Hoping to answer this question a little more visibly for readers, I asked if Litter-Robot could send another one of their automated litter boxes, Litter-Robot Open Air, to my sister, Amy, to use with her kitties, Ash and Addie.  I know many readers are concerned about how cats react to the Litter Robot or how cats will use the Litter Robot.  And my cats, Charlie and Trigg, are really used to new products and investigating them.  So I wanted completely different cats to be exposed to it.  Ash (male) and Addie (female) are 2 years old.  My male cats are 7 years old.  Here’s a video that shows how Ash and Addie reacted to it right out of the box.

As you can see, my sister’s well-adjusted cats took to it immediately and used it within the first 20-30 minutes it was out!

On the flip side – after I finished our first review of the Litter Robot Open Air, I gave it to my brother for his cats, Boots, to use.  She refused to use it and wouldn’t go inside of it.  She is an 11-year old Tuxedo cat.  Granted, the litterbox (eventhough I cleaned it) smelled like my male cats’ urine and feces (no matter how clean it is, a cat’s nose is smarter than my cleaning skills will ever be), so that could have been the reason she didn’t want to use it and was not inclined to go inside of it.  I would love to try a brand new one with her to see if it was the smell of my cats or just the machine in general.  Nonetheless, I brought the Open-Air back to my house and my cats started using it again immediately. 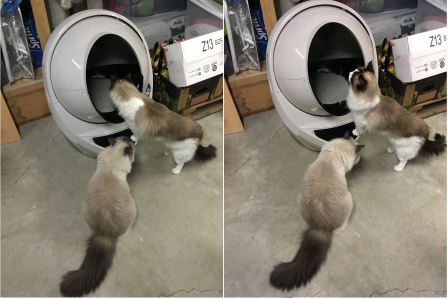 Here are the Best Practices for Switching Your Cat’s Litter Box to the Open Air: 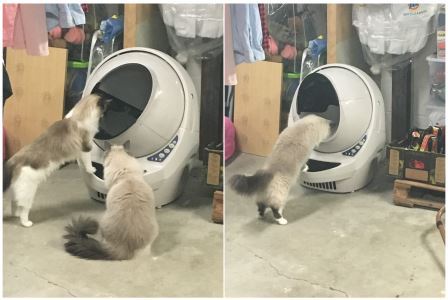 If you’re ready to purchase one, you can save $25 off your purchase of a Litter-Robot through this link.