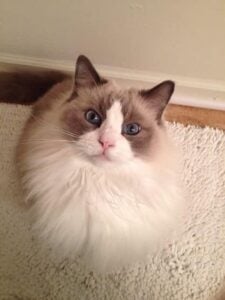 I LOVE BIG CATS and I’ve had several MainCoon’s. So when “Titus” passed away in 2007, needless to say, “Starbux” & I were devastated. And Starbux needed a playmate sooner than I had planned because he needed to play ALL THE TIME! So after I was settled into my new home 2 months later, I began looking for a new kitty. I began searching for a new MainCoon but came across a site for Ragdolls. After researching them, I was set on finding one. I didn’t need a breeder or show quality kitty, but I knew I wanted a male since they are usually larger and my boys were always more lovey. Also, “pet quality” was more in my budget. I didn’t need a kitten but wanted one young enough to be trainable. I got “Latte” on my birthday. He was 10 months old (born 3/10/07) and was going to be kept as a stud, but she changed her mind. I don’t remember who the breeder is, but I drove 4 hours to Illinois to get him. He barely meowed on the ride home. 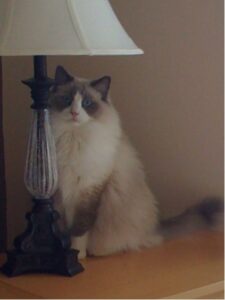 Now I have always had multiple cats and never had any issue with introducing a new kitty to the mix. I brought him in and took a few minutes alone with him, showed him the food & water, then put him in the litter box, then he was on his own to discover. Starbux hadn’t noticed when I brought Latte in, so I just let them find each other, which other than the initial hissing at each other and hiding for a few hours, they were best buddies within a few days.

Latte was pretty skittish with me for a long time. Very depressing to me! He almost acted like he had been abused. But he was safe with me and was healthy and loved Starbux, so I didn’t push it. Then one Saturday night he got VERY sick! Now he was never as floppy as I thought Ragdolls were supposed to be, so when he actually let me pick him up, he was scarily limp. I didn’t know what was wrong with him, but I didn’t think he would be alive until I could get him to the vet on Monday. I kept trying to get him to drink and kept him as clean as possible since he couldn’t make it to the litter box. 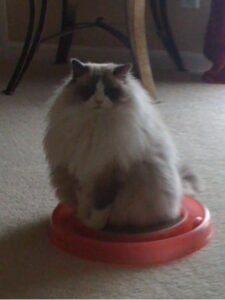 When Monday morning came I was afraid I’d find him dead, but I cleaned him up and was at the Vets the second they opened the door begging them to see him without an appointment. I had no choice but to leave him there and go to work. I called every hour while they ran tests that I couldn’t afford, but he was my baby and they just HAD to save him. When I got there after work, they said they didn’t know what was wrong yet and needed to keep him overnight. I snuggled with him until they made me leave. So hard to leave your babies in the hospital. He was a bit better the next day after fluids and meds, but they never had a real answer for me. Just maybe he ate or got bit by a spider. For the next 2 weeks, 2 times a day, I took him into my small bathroom and gave him IV fluids. He knew it made him feel better so he never fought me. We became much closer from all that time alone together. Although he always acted like the stepcat to Starbux.

Then 3 years ago Starbux passed away after being poisoned when the exterminators over-sprayed outside my doorway. Once Latte realized that Starbux wasn’t coming back, he seemed to have taken on a part of Starbux’ personality and became the lovey, snuggly, attentive kitty I didn’t think he would ever be. I guess Starbux had been the Alpha cat and now Latte felt he didn’t have to hold back.

Latte seemed perfectly happy as an only cat. He has never seemed to like toys, wet food or treats. Will only take Petkin Hairball Lickstick. I kept buying new toys for him, but the only thing he has ever liked are the plastic rings off of peanut jars. So one night I was watching a cat video and the cat had this loud, really sad meow. Latte woke up from a dead sleep and went nutso looking for that meowing cat. So after 2 years of having me all to himself, I decided he needed a buddy again for exercise as much as anything else. Boy was he jealous of “Georgie” at first, but he put the kitten in his place and remains MY BIG BABY! 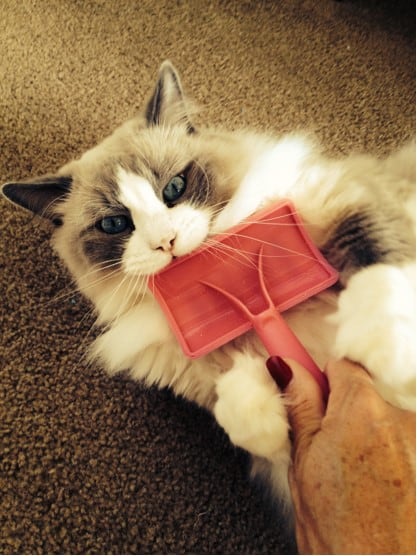 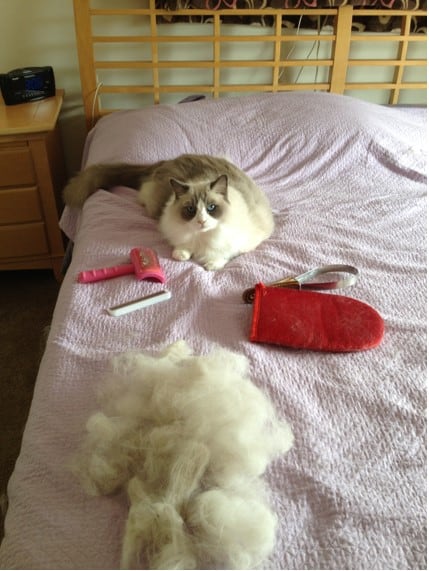 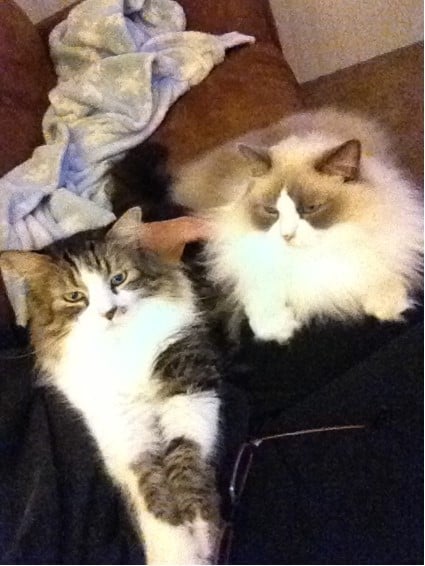 He is now 9 years old and sleeps his 22 lb. floppy body on my chest, he paws at my mouth if I snore, follows me around meowing at me like he’s telling me about his day, takes care of me when I’m sick and has perfect manners. He loves to be combed and never mats. And as you can see, he is GORGEOUS!
Do you have a Ragdoll Kitten or Cat?  Consider submitting your kitty!  Ragdoll of the Week submission guidelines