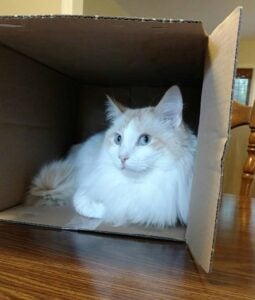 Washburn, Wash for short, lifted us up in a time of grief and has been a light in our lives. In 2013, we lost our beloved ragdoll Marina. We were heartbroken. Coming home to an empty house after work was very difficult after having Marina greet me at the door every day for nearly 10 years, so we decided to adopt again. This time we wanted 2 cats so they would have each other as companions while we were at work. My husband’s cat allergy made adopting cats a little challenging, however. Despite being highly allergic to most cats, when my husband moved in with Marina and I in 2010, he was fine – no allergies! We started looking at local shelters via PetFinder for a kitty like Marina (a ragdoll) to adopt. After what seemed like hundreds of profiles, my husband saw the profile for a handsome, 3-year old, blue-eyed, flame-point ragdoll mix. He sent the link to me and I fell in love. We arranged to meet this goofy boy at Merlin’s Hope Ragdoll Rescue – just a “meet and greet.” I’m not sure there was ever a chance he wasn’t coming home with us, but I tried to play it cool. Merlin’s Hope was so thorough about our application and 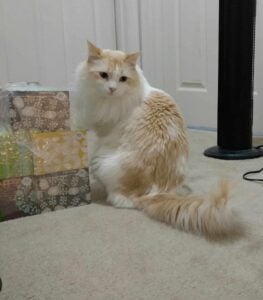 about making sure we were the right home for Wash, which we very much appreciated. We were even warned that his acrobatics had resulted in several broken household items at the rescue. He was even named Washburn after the pilot character on Firefly (blue-eyes, red hair, daring, goofy personality). A few days later, we put up all our breakable things and drove an hour to the rescue to meet him.

Wash practically greeted us at the door at the rescue. He put on quite a show for us rolling on the ground and jumping on the kitchen counter so we could pet him. MeLinda (Merlin’s Hope) told us his story – that he was found as a stray and picked up off the streets by a kind lady. He was a bit too much for the rescuer’s older cat, so Merlin’s Hope took him in. He was vetted and taken care of there until he was ready to go home. When we arrived, it was like he knew we were his people. Perhaps he did that for everyone (knowing him now, I think he probably did), but after meeting him there was no way we were leaving without him. 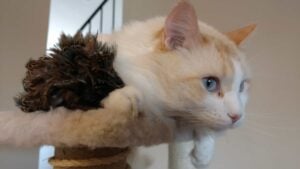 Wash made himself at home immediately. He was quick to roll over and show us his belly and his acrobatics made us laugh. The first time I heard him meow (except the drive home, of course) I cried laughing – I was expecting a much deeper voice for such a big kitty. Wash got a little “sister” a few weeks later and he’s been the quintessential “big brother” ever since. Anytime his little sister, Cake, is not feeling well, he’s right at her side. When she is feeling well, he’s trying to make sure she gets her exercise! Wash helped get us through a very tough time and has made our lives so much better. 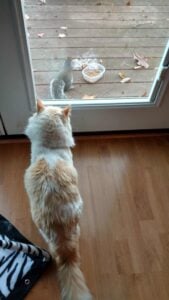 We celebrated Wash’s 3rd Gotcha Day this past September. Wash is curious (we have to baby-proof our home), funny, athletic, and sweet. He greets us at the door by flopping onto his back and rolling around at our feet. We have to warn visitors that what looks like an invitation to pet his belly is, in fact, a trap. He does not like to have his belly rubbed (look but don’t touch)! He wakes me up every morning to make sure I get to work on time (even on the weekends) – it’s also nice that he gets his breakfast package of BFF too – I’m sure that’s unrelated. He likes to play chase with his little sister, lay in the sun on one of his cat trees, play with feather toys, hunt squirrels (through the window), and make biscuits. He has a wonderful, deep, rolling purr and he chirps and talks to us frequently. Surprisingly, he has never broken any of our things (his sister has, though)! He has a bit of a fan club (family and friends) – we set up a Facebook page just for him and his sister (WashAndCake). We can’t imagine our lives without our buddy, and we are so grateful to Merlin’s Hope Ragdoll Rescue for taking him in and introducing us. 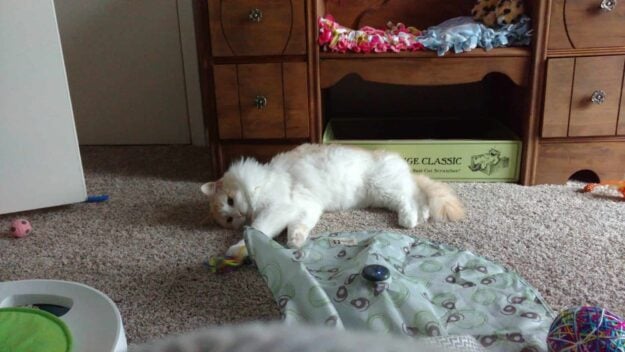 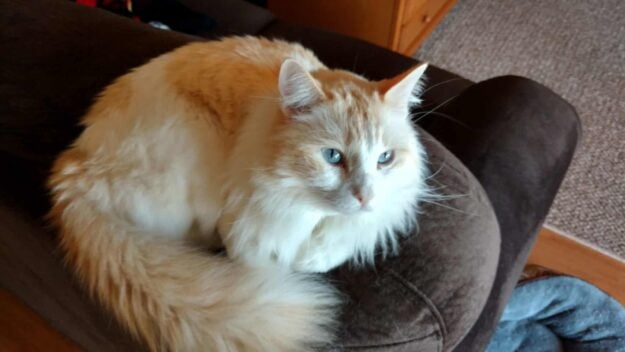 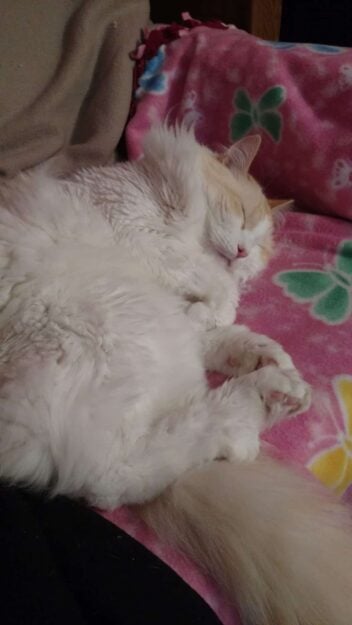 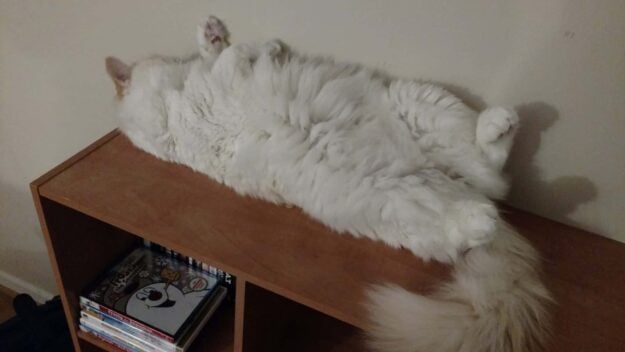 Do you have a Floppcat you'd like to have featured on our site?  Consider submitting your kitty!  Floppycat of the Week submission guidelines are here.