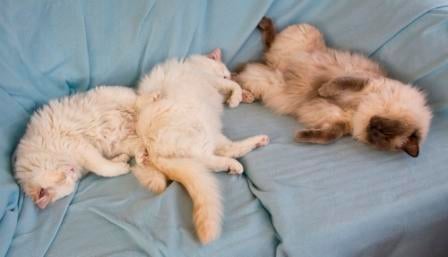 You need to introduce your new cat into your household with care. The biggest mistake that most people make is forcing cats on one another right off the bat--like throwing them into the same room together and letting them “figure it out” on their own or simply opening your new cat’s carrier and letting the new cat roam free without a proper introduction to your existing cat(s).

If you try to push your “strange” new cat on your existing cat will most likely cause an aggressive response from one or both cats and is not the proper how to introduce new cats to your household. Cats don’t like to meet other cats and immediately begin playing, like most dogs. On the contrary, they like to approach each other cautiously, establishing their social position with confrontation, a key part of how to introduce new cats to your household. Inter-cat aggression may result in fighting, stalking, inappropriate litter box behavior, and in general just making one of the cat’s lives miserable.

Here are some ideas you can try to avoid adjustment problems when you bring home your new cat or kitten.

When we introduced Caymus and Murphy to Rags, we were very careful in our approach. Rags was 15-years old at the time, and we had already tried to introduce him to a cat, Kit-Kat, we rescued from the Humane Society about 8 years before. At that time, Rags took a dump in the middle of everyone’s bed (except for mine) and starting peeing all over the place. We eventually had to find another home for Kit-Kat. So, we knew that introducing him to kittens 8 years later would be a challenge. However, the vet did mention that he would probably be more tolerant of them because he was older (and more accepting, probably), but that getting two kittens would be better than one. Two kittens could play with each other without bothering Rags all that much, all things to consider when thinking of proper how to introduce new cats to your household. We put Caymus and Murphy in a separate room, where Rags only had access to them under a door.

They spent two weeks in that room—acquiring the smells of our home and of us—before Rags was introduced to them. It was one of the hardest things to do as we were anxious for them to meet and wonder what they would do, but of course, it was an essential part of proper how to introduce new cats to your household. But we had to make sure they would be okay because my father had already warned us that he thought it would be a bad idea to bring in two more cats, as he remembered well, Rags response to Kit-Kat’s homecoming.

When the two weeks were up, we put the kittens in a carrier and let Rags in the room. He had the power and control because they were locked up. He was the one that was able to approach them. Once he smelled them and did his hissing, and finally settled on a bed across the room where he could keep an eye on them, we let them out. He watched them interact, as they were a little too young to notice him in the room. We repeated this process over and over again. We kept the kittens in that room for probably 2-3 months before letting them out for good, always giving Rags the proper amount of attention and affection, so that he was not jealous of their homecoming. I am happy to report; there was no inter-cat aggression or peeing/pooping in the wrong spots!

As I pointed out above, regardless of the age of the cat being introduced, isolation is the first step to introducing your new cat into the household. You want the new cat to lose the scent of where it has come from and acquire the scent of your home—before your existing kitty gets a whiff of that old scent. You want the isolation to be as isolated as possible—the new kitty and the old kitty should not have any interaction under the door or through cracks. Ideally, isolation should last about 1 week or longer. You can always take a couple small towels and rub one on each cat for the scent, and put it in the others rooms so they can get used to the smell. However, you would want to make sure your new cat was disease free before you were bringing it's saliva reminents to your resident cat.

When the isolation period is over, bring both cats (one person brings the new cat and one person brings the resident kitty) to the largest room of the house. The new cat is on one end of the room, whereas the older cat is on the other end of the room. Whether you are handling the new cat or resident cat, be sure to do non-threatening things, like playing or petting them, allowing both cats to eye each other. You want to desensitize them to the other’s presence. You can also feed them something yummy, or comb or brush them if that’s what they like. You want both cats to see each other without making aggressive behavior or have aggressive posturing.

When they encounter each other where they stay calm and not angry, encourages them to interact this way they next time they meet. If they do well for a shot time at a great distance, the next day repeat the process by decreasing the distance between them by a foot or two and increase the time they have to check each other out. The first day be about 10 feet apart for 5 minutes, the next day try 8 feet apart for 10 minutes and so on and so forth is a proper approach of how to introduce new cats to your household. If they start being aggressive, you will have to back up and start over. I know it sounds tedious, but believe me, it’s worth it!

If several days go by and you feel like they are tolerating each other, let them explore the room and find each other at their own speed. There will be some degree of posturing between them in order to figure out who’s who. Ideally you would like for them to be able to be in the same room or on the same piece of furniture without fighting. Realistic expectations are for them to tolerate one another. If you’re lucky, then they may turn out to really like or love one another.

Some cats, no matter how hard you try (like we did with Kit-Kat), are not going to accept new cats into a household. Sometimes your vet can recommend medication to make them less anxious and relieve some of the problems. Your vet can also advise other behavior modification techniques to take the stress off. If you feel like there are problems, talk to your vet immediately about solutions of how to introduce new cats to your household. The longer you wait, the worse it could get.

Contact Floppycats.com about additional suggestions of proper how to introduce new cats to your household.