Oliver was also Ragdoll Kittten of the Month - read that here. 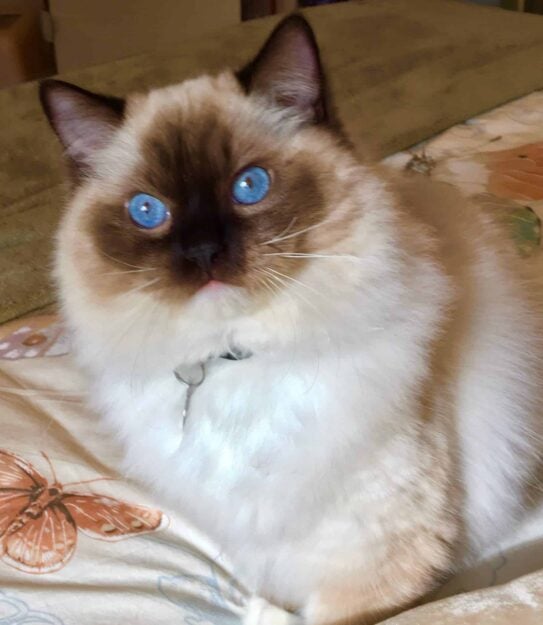 Oliver is 1 year old and is a Seal Point Mitted Ragdoll. He was adopted from Adorable Dolls Ragdolls in Roseville, Ca. I had wanted a Ragdoll kitty for over 10 years, and finally got Oliver last July 2017. He is ADORABLE, and beautiful, and full of character and personality! He is purrrfect! I had wanted a Ragdoll after reading about the breed and their personality. Oliver is very sweet and very smart. 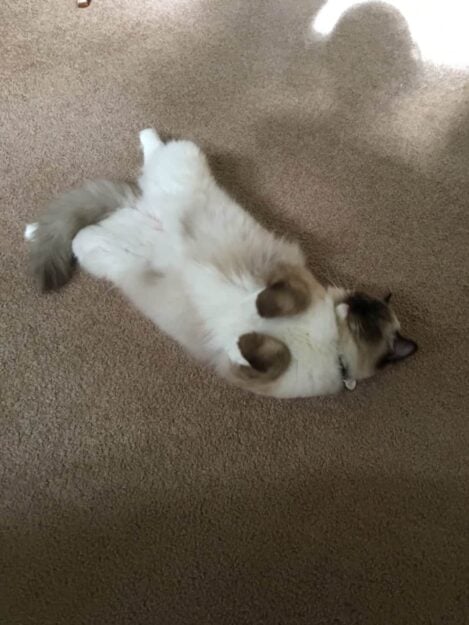 He isn't a lap kitty and doesn't really like to be held that much, but he will at least let me hold him long enough to give him 500 kisses every day and tell him how much I love him!! And he follows me everywhere! So he is always with me and is so much company. Oliver likes to sleep with his head on a pillow, which I think is adorable!! He was sharing mine, but I would always disturb him so I got him his own little pillow! 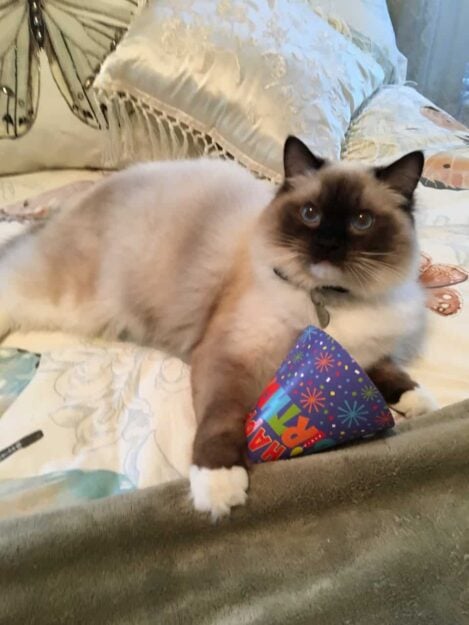 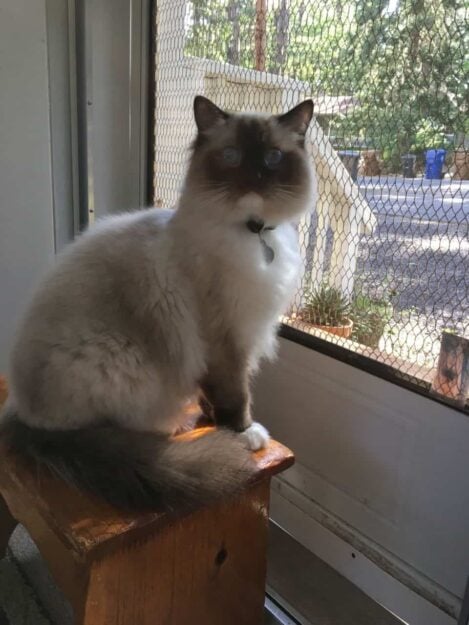 Oliver learned to turn on the Roomba when he was very young, but I was able to determine when he was about 6 months old that he knew exactly what he is doing in turning on the Roomba! He now turns the Roomba on several times a day! In fact I call it “Oliver’s Roomba”!! I don’t put it on the charger every day because I’m afraid he will wear it out if he hasn’t already!

Flashback! Oliver had been turning the Roomba on for quite a while, but it was when he was 6 months old that I learned he definitely knew what he was doing in turning on “his” Roomba!

A post shared by Oliver The Adorable Ragdoll (@oliveradorableragdoll) on Aug 2, 2018 at 9:38am PDT

Oliver's favorite toys now are his blue "cube" that attaches to another cube with a tunnel between. But he prefers to play with just the one cube and his crinkle balls. He loves to run in and out of the cube and push it around with his nose!

A post shared by Oliver The Adorable Ragdoll (@oliveradorableragdoll) on Aug 13, 2018 at 9:06am PDT

He can catch his crinkle balls in midair also! He also plays fetch, but he usually takes the "scenic route" in coming back to me to throw his toys again! He's very stubborn! He has to eat his wet food before he can have his dry food, which he really, really wants. So he will come and "tell" me several times a day that he has finished his wet food, and then we "go see" to the kitchen, where I have to tell him that he has to lick his bowl clean before he can have his dry food! Which he full well knows, but he "barters" with me to see if he has eaten enough! So we make the trip to the kitchen to “see” 6-8 times a day! Hilarious! He is so much fun and so cute and is such a character! He is very vocal and we have entire conversations!

Oliver has to eat all his wet food before he gets his dry food. So he “negotiates” with me all day on whether he has eaten enough! He will come and tell me he’s done and we make this trip 6-8 times each day until it is all gone! Hilarious!! Love this little guy! #catsofinstagram #cat #meow #catstagram #cats_of_instagram #cute #adorable # adorablecat #cutecats #ragdollsofinstagram #ragdoll #ragdollcat #blueeyes #ilovecats #catoftheday #sealpoint #ragdollbeauty #catinstagram #ragdolloftheday

A post shared by Oliver The Adorable Ragdoll (@oliveradorableragdoll) on Aug 23, 2018 at 9:29am PDT

Oliver got an Instagram page a couple of weeks ago - oliveradorableragdoll, and he now has 162 followers! Oliver is a house cat, but he does get to go out on the deck with his harness and leash. He is very patient and sits very still while I put the harness on him. And when he get to the end of the leash he just sits down like a good boy and doesn’t try to pull out of the harness! What a good boy! Like I said, Oliver is Purrrfect and I love him very much! 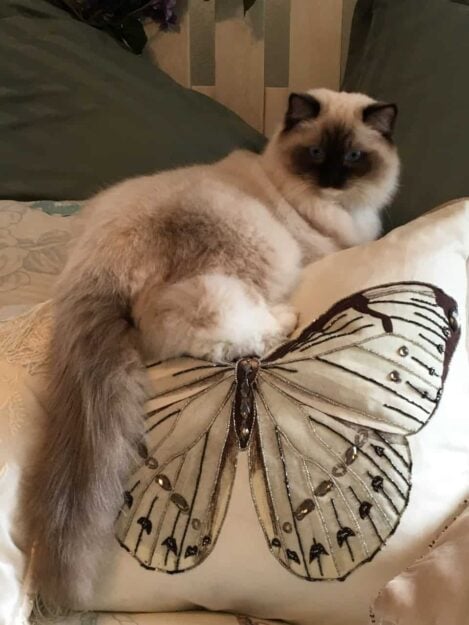 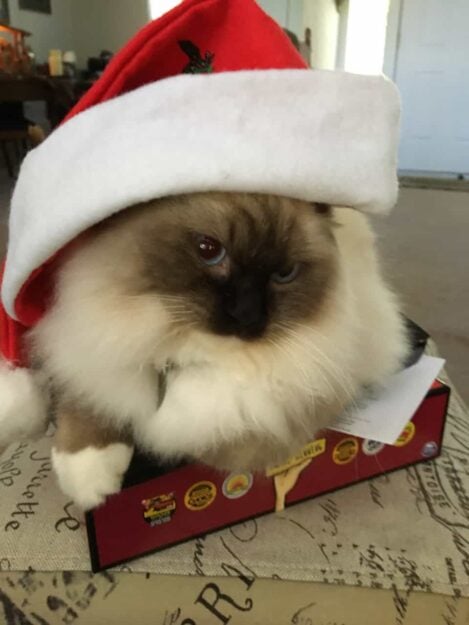 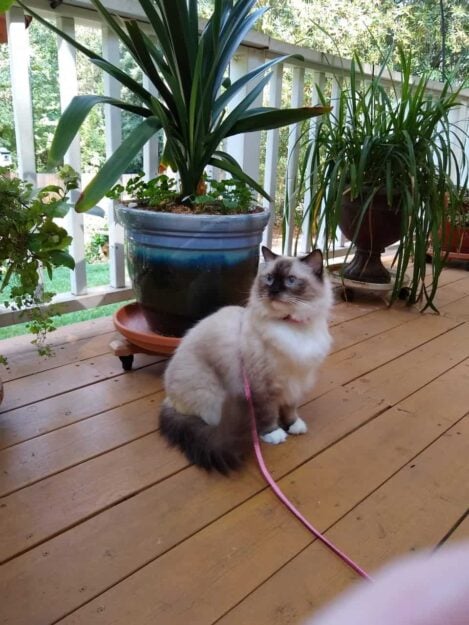