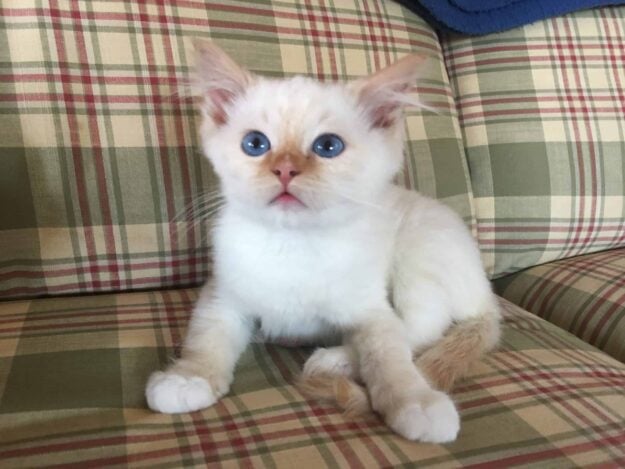 I saw my first ragdoll about 15-20 years ago when as a nurse, I was making a home visit for work. At the time, I had 3 cats and couldn’t add more cats to my household. I never forgot them though, and when it came time for me to adopt again, I sought out a ragdoll that I had wanted for so long. 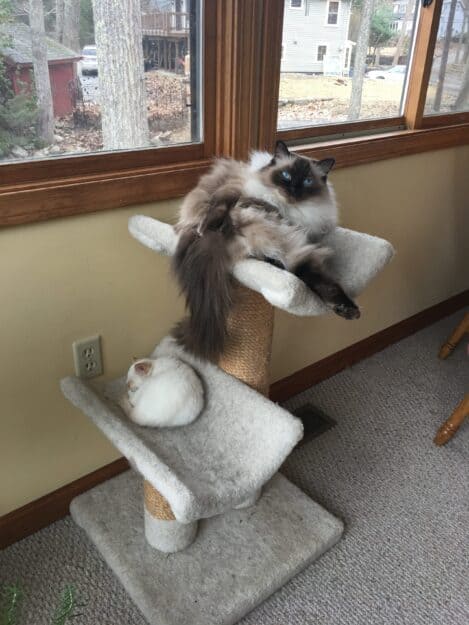 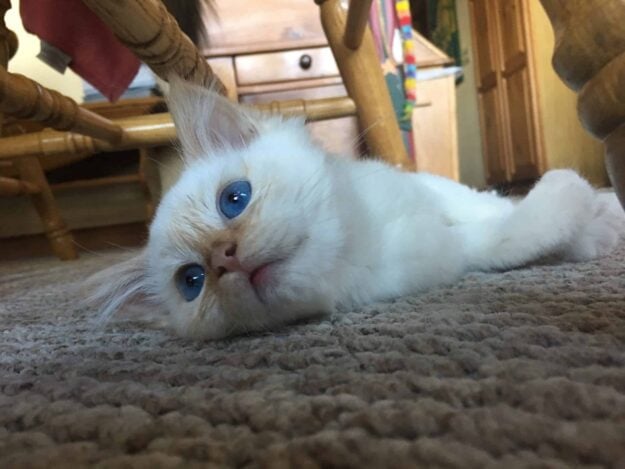 Everett was born 10/31/17. He is a flame point and currently 18 weeks old. I brought him home on 2/19/18. I used the same breeder from where Emma came from, Charlotte at Rhetorical Ragdolls in Plainville, MA. I like her standards, the 2 year health guarantee, and the way they are raised and socialized around other people, cats, and dogs. I would recommend her to others looking for a ragdoll. You have to pass a test prior to making a deposit. She wants them to go to good homes only! 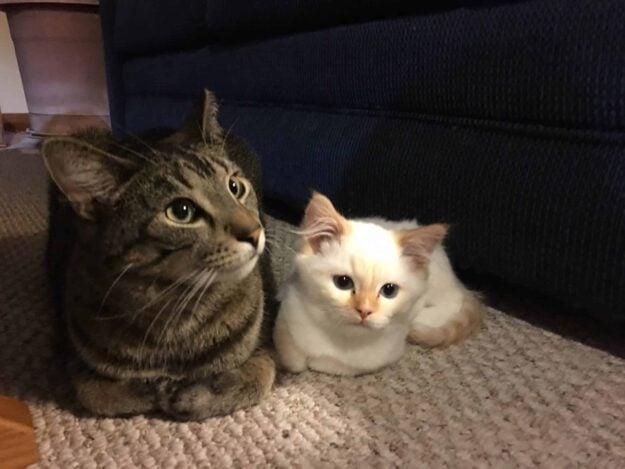 Everett was the runt of the litter so I had to wait a little longer in order to be able to bring him home. He was worth the wait. He is affectionate with a big voice. He likes a lot of attention. I think he is training me because when he meows, I run to him to figure out what it is that he wants! It took 3 days for my other 3 cats to accept him. Now they all get along very well. He is the cleanest kitten around as the other 3 are often washing him. He purrs and loves that attention that he gets from them. 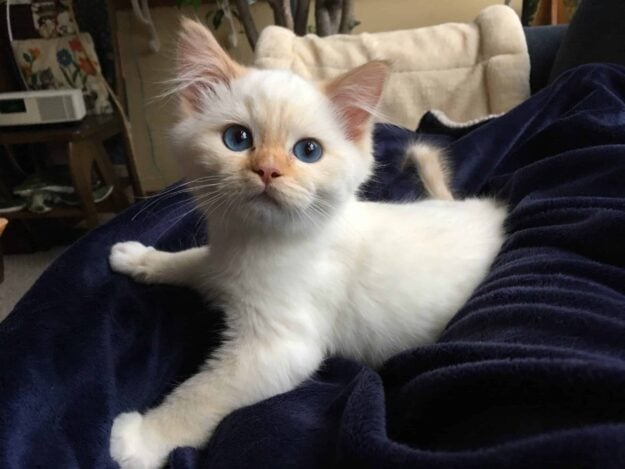 He has only been here for a little over 2 weeks, but it feels much longer. Initially he was shy, but he is rapidly developing confidence. He has just started carrying and playing with toy mice. He likes to play with the other cats, and curls up with them for snuggles. He will go up to them and grab their tail or legs when he wants attention from them. This results in them putting him in a headlock and forcibly grooming his head. He purrs in response. He likes it when I change the sheets on the bed. He likes to nap in high places. He is a good climber and a dare devil already! 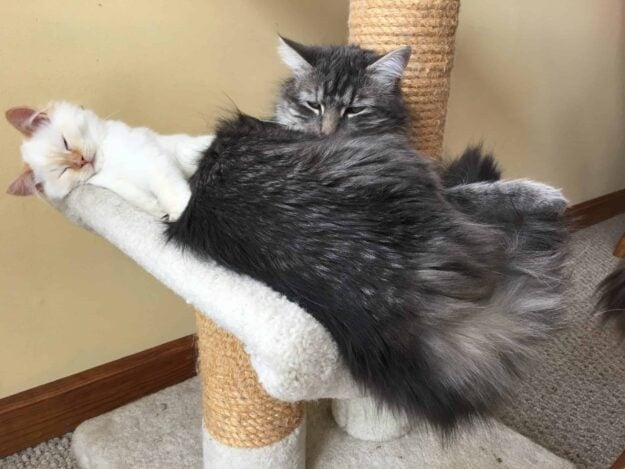 One of his favorite things so far has been the cat tree, which is very sturdy. This is being used now by the 3rd generation of cats. It has seen daily use for the past 20 years! The cats like being able to peek out the window from the top perch, and it’s a great spot for naps. 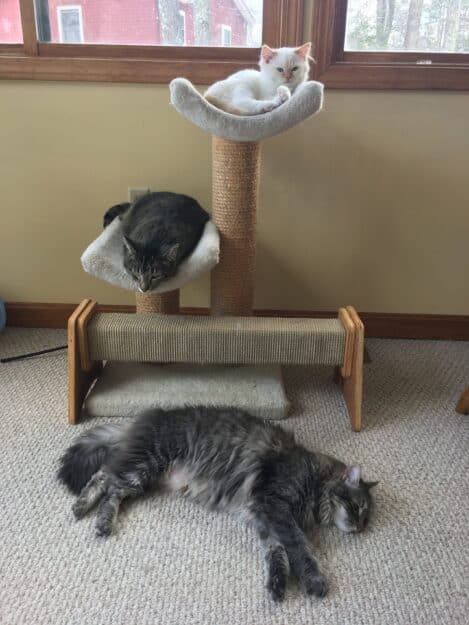 I feel like Everett completes my kitty family. I now have 2 males , 2 females , 2 ragdolls, and 2 rescues. There is 19 months difference in age from my oldest to Everett, the youngest.Everett is named after a great uncle. I told Charlotte back in November when I placed my deposit on him, that his name was Everett. She has been calling him by name all along so that from the moment I brought him home, he already knew and responded to his name! That was amazing to me. 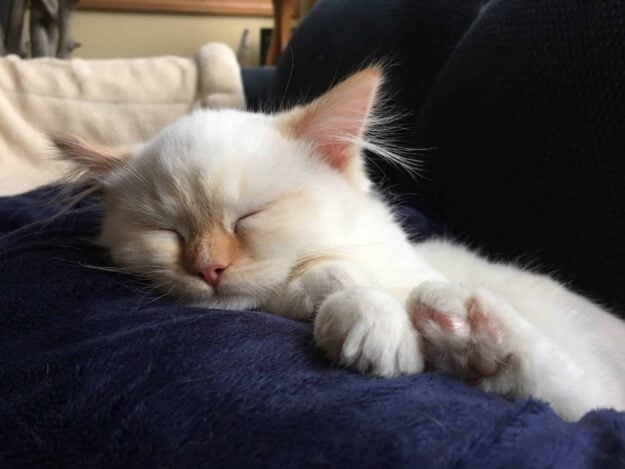 I’m looking forward to watching him grow and seeing his color come out. I see a hint of a white blaze on his nose, and potentially white front paws. I’m curious to see if those remain. He is an adorable kitten and he’ll become a handsome cat!Do you have a Ragdoll Kitten or Cat?  Consider submitting your kitty!  Ragdoll of the Week submission guidelinesRead more Ragdoll Kitten of the Month submissions.Getting a Ragdoll Kitten? Check out our book: A Ragdoll Kitten Care Guide: Bringing Your Ragdoll Kitten Home