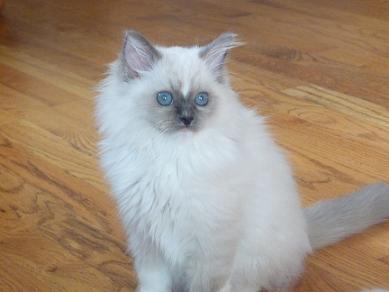 Tyco, a blue-mitted with a diamond blaze Ragdoll kitten

My husband and I adopted Tyco, a blue-mitted with a diamond blaze, at six months of age from a breeder in Minnesota - Kelly's Ragdolls. Kelly had kept Tyco and his sister, Dolly, for evaluation. Tyco ended up having his right mitten that became a runner, so he was made available for adoption as a pet. This doesn't bother us in the least. It only makes him even more adorable and hilarious!

Kelly has a very small, in-home cattery. My husband and I drove to Cedar, Minnesota - an eight-hour drive through a snowy blizzard - to pick up Tyco! Well ... he drove, and I napped. Kelly is wonderful. I've always wondered how breeders can part with their babies but it was obvious that Kelly really loves her four-footed babies. 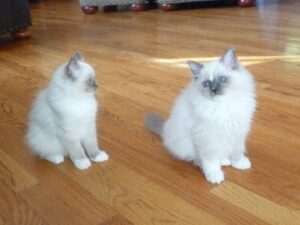 Tyco as a kitten with liter mate

Throughout the adoption process, she answered all of our questions with ease, comfort and confidence and described Tyco in the most funny and accurate detail possible, since we couldn't meet him before picking him up. Her home was very clean; the animals were all healthy and inquisitive. And when we were leaving, Kelly cried for Tyco. Which made me cry. We hugged, and we've kept in touch regularly since then. We send her pictures of Tyco all the time so she can see how gorgeous and healthy and happy he is, and so she knows he will always be loved and taken care of. We absolutely recommend her as a breeder! 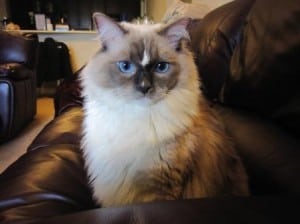 At the time that we were searching for a kitty, we were living in Winnipeg, Manitoba, Canada and we were searching for the right cat to adopt. We had a very high-strung, dominant female rescue at home, Angel, and we knew in order to introduce another cat to her, it would have to be a calm, docile, submissive sweetheart. We had never considered a purebred before but the advantage of buying a purebred was obvious at this point - by going to a breeder, we had a better chance of knowing the kitten's temperament, for a perfect fit into our home. We did a lot of research into cat breeds, and since I had always loved Ragdolls/Birmans, we settled on a Ragdoll - when I saw Tyco's face as a kitten, I was sold! We lucked out, Tyco was perfect for us. He fell in love with her right away. Sadly, it was a one-way love.  She tolerated him but never expressed interest or affection towards him. 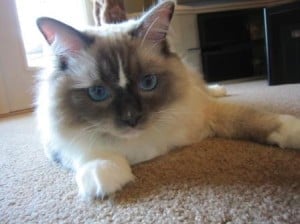 Tyco was born June 1st, 2009 and we have had him since he was six months old! It doesn't feel like he's two already! He's such a big baby.

Tyco loves just about everything. Except for doorbells, closed doors, and the sound of scissors "snipping", which makes him nervous. He likes to flop in the kitchen and assume people will step over him - and he does the opposite - flattening himself on his stomach. We call this "The Flapjack". He is always underfoot and loves to follow me around while I'm cleaning. He also loves ice cubes in his water, boxes, crinkly things, shoes, twist ties, and Greenies Pill Pockets. He spends a lot of his time napping upside down, investigating where his people are, bringing us toys to toss, and being cute. 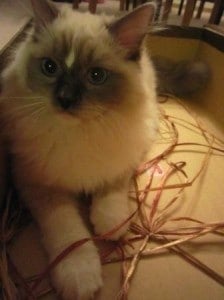 Tyco in a box

Tyco is surprisingly chatty, even though most Ragdolls are generally quiet. He chirps and meows in a lovely, melodic voice. He is a charmer and a love bug. He lies around and waits for cuddles and attention. He purrs once he can hear someone, see someone, or is being spoken to! If he’s not purring, he’s asleep! We often spend time together playing or while I am combing out his fur (during which he purrs like a motor).

Tyco has not yet achieved stardom on YouTube, but he is indeed on there, along with the other two kitties. And I blog about him on www.gourmetpens.com.

As for his name, we didn't want to change it; it suited him perfectly. Kelly named him based on his bloodline - KellysRags "Toy Story" Tyco. People ask, "What on earth is a Tyco?" And I can simply point to the fluffy, upside down, purring, 18-pound cat on the floor. It seems self-explanatory! 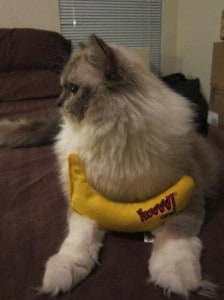 Tyco's absolute favorite toy is a weird little thing given to us by his breeder - the Go Cat Teaser Cat Catcher Wand. It is simple and genius. As soon as I pick up that wand, it doesn't matter where Tyco is or what he was doing - he comes for that toy!  He loves to chew on it and carry it around, dragging the wand after himself.

Another favorite is the Yeowww! Catnip banana, by DuckyWorld Products. These are quite popular in the cat world (and cat-owner world) and never fail to disappoint. Tyco loves to snuggle with his banana. 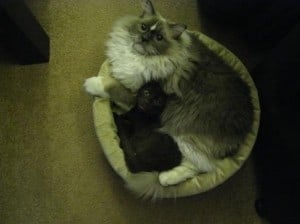 Tyco in bed with Jake

He also has a love for Muttluks Bio-Cuddler beds - in the small size. We bought the mid-size for him, seeing as he was a big cat, but he prefers to squish himself into the little one and let the smaller kitties have his. Or, they like to squish in with him! 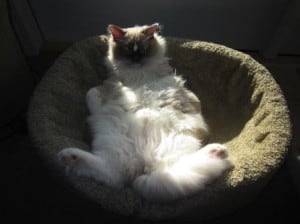 Tyco really loves other cats. He fell in love with Angel, our rescue girl, even though she never returned his affections. We also adopted a Havana Brown kitten, Jake, when Tyco was 1.5 years old, and they became immediate friends. Jake loved to cuddle and nap in Tyco’s fluff. We lost Jake to FIP when he was seven months old, just hours after suddenly losing Angel to heart disease. The loss of both kitties was hard on everyone, even Tyco. A lot of people say Ragdolls are “dumb”. Sometimes Tyco does things that make me think he hasn't a thought in his brain! But he has been trying his hardest to fill two sets of cat paws that are missing – being extra cuddly, extra loving, and purring and kneading more than ever. This made us realize our sweet Tyco is not only intelligent; he is sensitive, compassionate, and even more loving than we ever could have imagined. We are so grateful for him. 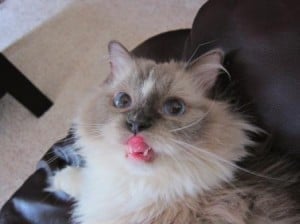 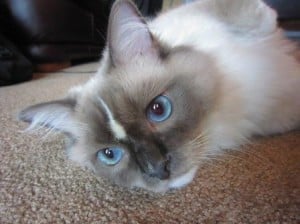 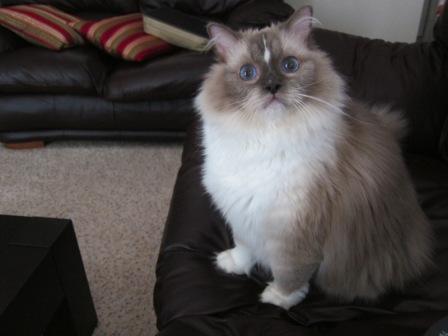 Tyco on the couch 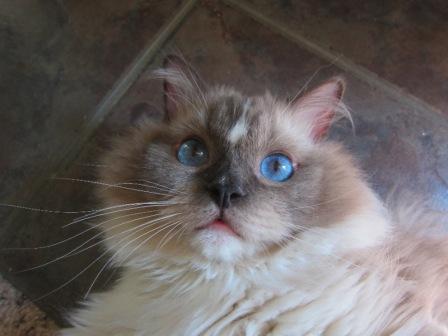