Okeanos is a little over a year and a half old. He goes by Oki since most people don't want to pronounce his full name! It turns out that naming him after a Greek Titan gave him a Titan sized personality as well. I should have known better! Oki was picked out from a breeder, and welcomed into my family full of ragdoll lovers.

Growing up, my parents had gotten ragdolls for most of my life, and we all fell in love with the breed. Having cats who wanted nothing more than to be in the same room as you was amazing and couldn't be beat. So, my mom told my brother and I that when we were grown up and settled in, that she would get us our first ragdoll so that she could have ragdoll grandkittens.

When she finally told me that it was time, I immediately started looking at different breeders in my area. I found a wonderful lady who let me schedule to come look at the litter she had on January 9th of 2020. I excitedly texted my mom that she could come with me on that day, completely forgetting that it was her wedding anniversary with my dad. She said she would pick playing with ragdoll kittens over hanging out with my dad every time. 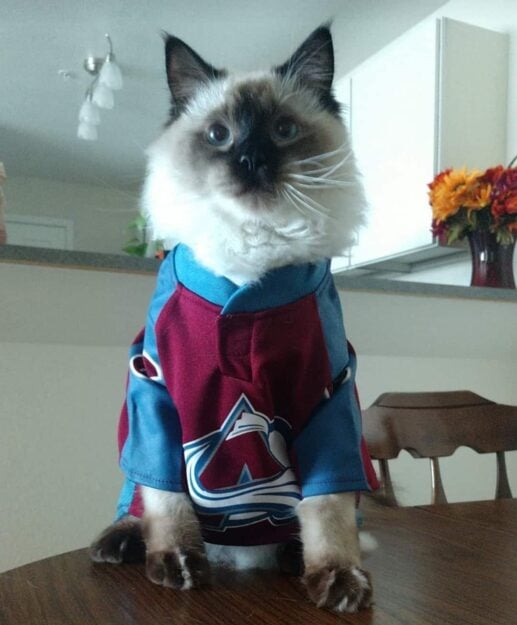 When we got to the breeder, she pointed out the ones that had already been claimed, and so I sat down on the floor and started playing and interacting with everyone. A kitten who had been picked decided that my lap was the best napping spot he could find.

Oki, between playing with his brothers and sisters and trying to find treats that had been hidden, would jump up on my knee and just stare at me for a few seconds before going back to kitten shenanigans. I would play with the other kittens, but none of them quite hit me the same way this kitten that kept jumping up on my knee to look at me did. And so Oki came home with me that night at just over 12 weeks old.

My mom, being retired, was able to stay with Oki that night and the next day while I went to work. After a few days, he decided that his favorite spot wasn't behind the couch, but instead wherever I was sitting. Two months later, the country went into lockdown and I started working from home. He had gotten used to a routine of playing with my keys and hairbrush and pajama strings each morning, but quickly changed his routine to just switching where he was sleeping depending on where my laptop was. He found that he loves to help me work by erasing the whiteboard I was using, sending non-sensical messages to my coworkers, and even deleting a few emails here and there. 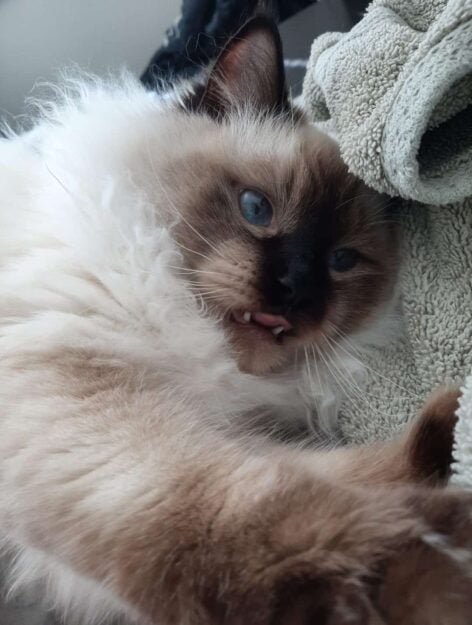 In this home, we found out that his favorite toy wasn't a wand, or a mouse, or a laser pointer. Instead, his favorite toy was an ice cube. The refrigerator had an ice maker built in, and by the time we had moved out of this apartment, he had nearly figured out which button he needed to press to get ice cubes out. 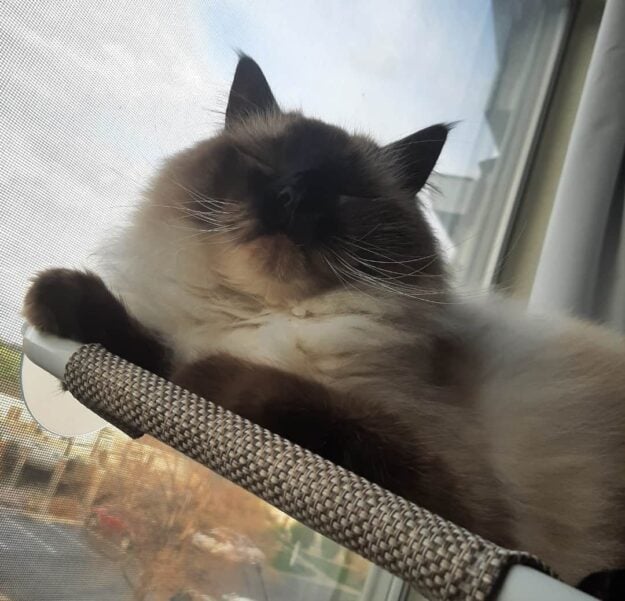 At our new home, he realized quickly that we don't have an ice maker anymore.... so we bought a standalone one, alongside 7 ice trays that are constantly ready to be thrown down the hallway for him to chase.

He still loves his ice cubes, and many of his hundreds of other toys, but he has taken a liking to one of my blankets. Each morning when I get up to start work, I bring his favorite blanket with me to start what is known as his 'muffin shift' while he kneads on me/the blanket. After that, he finds a comfy spot in the home to take a nap until his internal clock tells him I'm done with work, and that it's time to play. 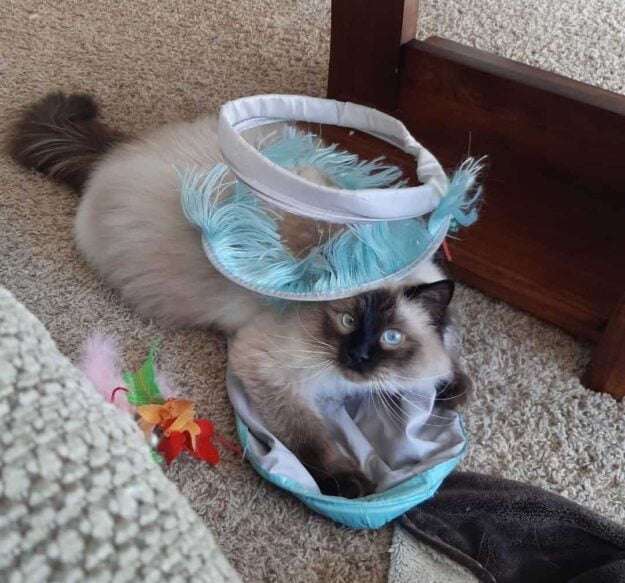 I have to say his newest and most favorite thing so far is honestly a Litter Robot. I'm pretty sure he is genuinely in love with the spinning contraption. When it first came in, I was worried he would be afraid of it, like many reviewers said their cats were. So I went through the steps to slowly get him to use it. But, I was impatient and needed to make sure that the product worked, so I plugged it in for a test run about 6 hours in with the plan to unplug it if he was afraid. So, it started spinning. 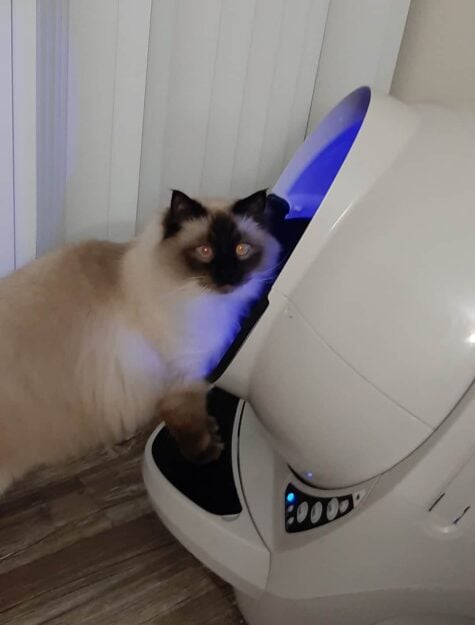 He became obsessed. It's been about 2 weeks since I got it, and for the first week, he decided he would rather sleep in the room with his new fancy litter box than in the bedroom with me. Each time it went off to clean, you could see him sprinting from any room to go stick his head in. My phone is constantly full of notifications saying the cycle has been interrupted because my dumb baby wants to get in while it's spinning. He seems to be getting less interested over time, but boy, I've never been jealous of a litter box until now. 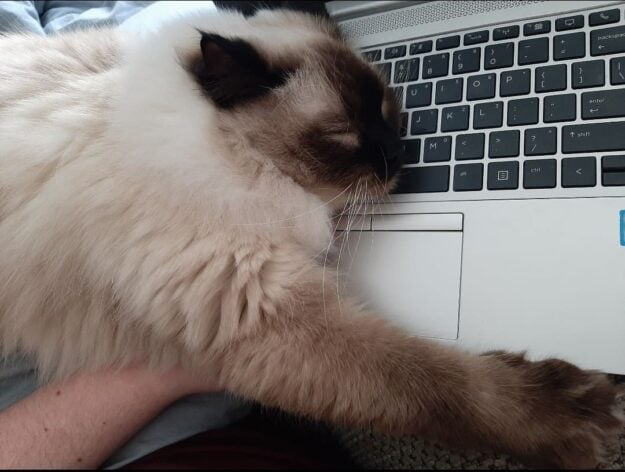 Overall he's been the best addition to my family, coming in at just the right time, a few months before the pandemic hit. He and I talk and play and cuddle daily and I can't wait to see what other shenanigans he gets into, what unconventional toys he's going to love, and eventually, how good of a big brother he will be. 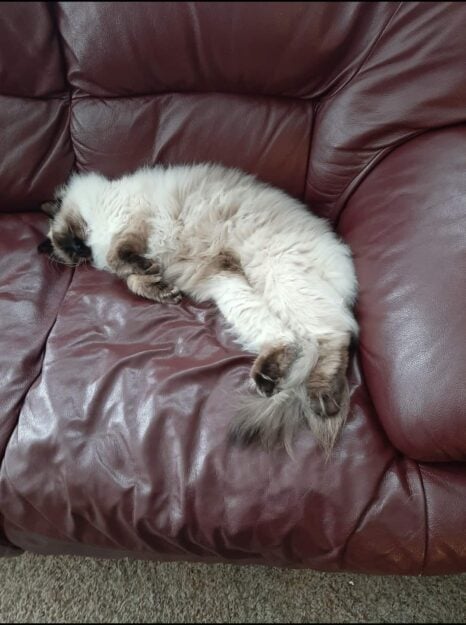