I have been a lifelong cat lover and have had cats all my life, starting when I was very young. My first cat was a purebred blue Peke-faced Persian with copper eyes, and I named her Neeko (which means Cat in Japanese, but I unknowingly misspelled it). She was the runt of the litter, so the breeder (Marjorie Plambek in Arlington Heights, Illinois) sold her to me in 1967 for $25.00! She never weighed more than 7lbs. and lived to be 16.

Since then, all my cats have been rescues, and I had one (Milo) who was feral and he lived 19 years. He was a beautiful, smart, long-haired orange tabby with a white ruff. He was also very wild and I can’t print the nickname my husband gave him here in this article (but it was really funny!) My other rescue cats were: Otis, Summer, Halle and finally, Cleo (an old Maine Coon cat).

After Cleo died last year after having her for only six months, my Vet told me “You need to start rescuing younger cats”, so I did research and discovered how amazing Ragdolls are, so I went on what my husband calls “…my cat hunt….” 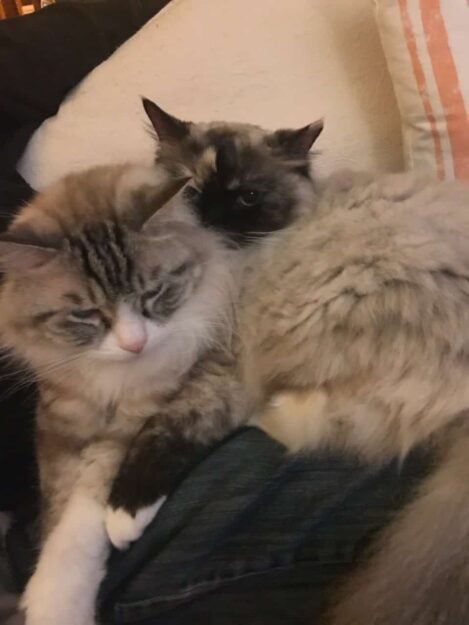 I saw a posting on Rescueme.Org for Gabby and Louise. When you access the website, you list the breed you prefer. I listed my preference for a Ragdoll cat and was thrilled when Gabby and Louise appeared! They were listed separately and it took a minute for me to realize they were from the same foster home! I believe there was a third sibling who had previously been adopted – otherwise, I would’ve had three Floppycats!

I found not one, but TWO Ragdoll sisters in southern California. Their human mom had passed away at 86, and they were with a wonderful couple who were fostering them, along with many other cats. Their foster parents personally delivered them to our door in the Santa Barbara, California area last May.

We nicknamed them Weezy and Gabs, and they are a bonded pair – Louise is a lynx-point and Gabby is a tortoise shell. The vet thinks Weezy is approximately nine, and Gabs is between four and five years old. 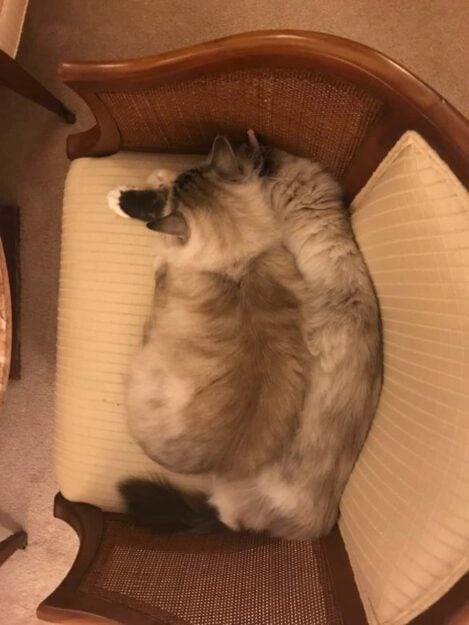 Gabs was very thin and ill with IBS when I got her, and the Vet prescribed liquid prednisone and vitamin B12 shots, and said Gabby would need these medications for the rest of her life. Both cats had constant diarrhea. I read online about a woman who had two Ragdolls with projectile diarrhea (which I cannot wrap my mind around), and she cured it by feeding her cats organic poached chicken, along with the broth.

I figured I had nothing to lose, so I tried it, and IT WORKED! Gabs is now strong and healthy with a beautiful, silky coat, and neither one has a trace of diarrhea. Gabs is now off all medications! They both eat Blue Buffalo grain-free chicken: Weezy eats canned food and Gabs eats the dry food, but neither one has any interest in eating the others’ food! 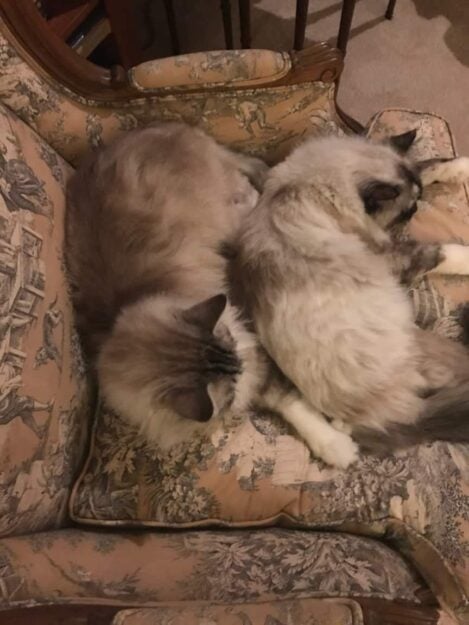 They follow each other around the house and sleep together. They have very different personalities – Gabs is very outgoing and verbal, and is quite a character; Weezy is much quieter. They have adapted beautifully. We agree that they are the best cats we have ever had: Smart, loving, docile, sociable, and they are so affectionate and love their new family! We tell each other all the time that we won the “cat lottery” with our two beautiful sisters! And, for those of you who think two cats are a lot more work – no, they aren’t (….except for a bit more litterbox work!) 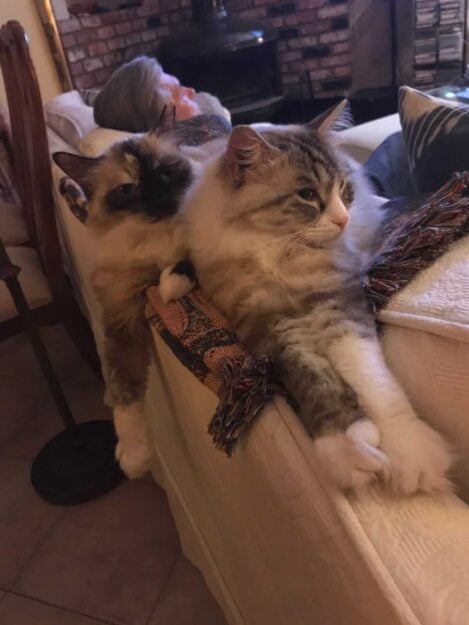