Marcia, a Floppycats reader, wrote me an email saying:

"I just wanted to say thank you again for the interest you took in my Floppy, Minkster-the-Jinxster! When I first got him 2.5 years ago, he had terrible gastrointestinal issues. Having never owned a cat before, I was stymied as to what I should do to correct the issue. We had to sleep with a large sheet over our heads because he was dripping all over from his problems. Anyway, I appreciated your encouragement and concern. In the end, I found a solution on-line…to feed him boiled organic chicken…within two days, the three-month siege, which neither our veterinarian or the breeder could solve, was over. Since then, he has become the dearest, sweetest, and most-beloved pet. He is now eating regular cat foods without a problem (knock on wood). Further, I so enjoy your Flobby site. Keep up the good work and showcasing these wonderful creatures!"

Our email correspondence continued - and as it continued, I had more questions - eventually requesting a post from Marcia!  Marcia generously obliged - thank you!  I wanted it on the site, so it might help other kitties and their parents in a similar situation.

THE CASE OF PROJECTILE DIARRHEA!
Submitted by Marcia Ray 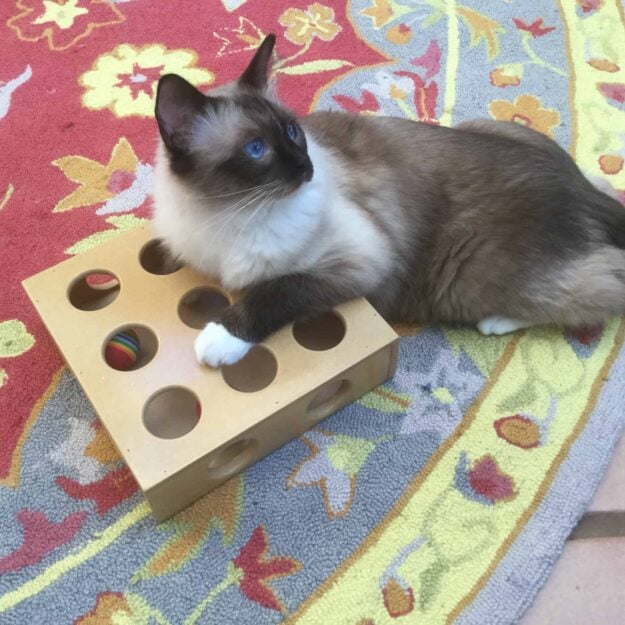 As my husband and I huddled under our protective bed sheet, we wondered what in the world we were going to do with our newly acquired, adorable, three-month-old Ragdoll kitten who was plagued with projectile diarrhea from the moment we arrived home with him. We had never owned a cat before and always professed to be less-than-enthusiastic about having cats as pets. We were grieving over the death of the last of our beloved Lhasa Apso dog pack, all five of whom lived well into their senior years; and I happened to see a Ragdoll cat picture and personality description on-line—I was hooked! Within two weeks we drove ten hours round trip to pick up this beautiful creature. The breeder told us she had kept him for herself but decided to sell him after meeting us the first time we visited her cattery the week prior, which is why he was already three months old when we got him.

We didn’t have the heart to cage Minkster-the-Jinxster (Minkie for short) when he started dripping feces all over our house. He was great using the Litter Robot we had acquired; but we spent our days cleaning up behind him (kind of like the clown who follows the elephants or horses in a parade scooping the droppings). Further, we were constantly bathing him because he was soiling himself (he was not happy being bathed and we were inexperienced cat bathers… so my husband and I looked like we had been scratched by a tiger). The breeder reassured us that he had not had this problem in her cattery and even sent pictures of her cats’ litter box showing nicely formed poops! She was too far away and really couldn’t help which we understood. Besides, he was eating the same cat food that he had been fed at the breeder’s cattery. Our veterinarian did the usual battery of tests for parasites, worms, x-rays, etc., which cost a fortune; but nothing explained Minkie’s diarrhea. We were very worried about Minkie’s health. The vet gave us prescription canned food…didn’t help. After THREE MONTHS of no answers, we were getting close to giving up on this adorable cat with a personality so sweet and loving. We were heartbroken. I remember emailing Jenny of Floppycats who was very reassuring and supportive. I’m so appreciative of her encouragement during this time.

We were at our wits end….we felt dirty, always worrying that Minkie was going to soil our furniture or our bedding. Most of our upholstered furniture was covered in sheets or towels and Minkie was “locked out” of our favorite rooms so we could have friends over (if they plugged their noses). Concurrently, we had two new Lhasa Apso pups on order; and they would be arriving within the month. The addition of two pups to be housebroken upon arrival along with Minkie’s gastrointestinal problem seemed more than two retirees could manage.

Finally, it occurred to me that I had relied on other people to solve the problem. Having always been self-reliant, I started doing my own research on-line. Also, we had run out of our regular cat food…so my husband talked with the manufacturer about what we could feed the cat until the shipment arrived. Lo and behold…my research and my husband’s question to the food manufacturer both pointed to the same solution: feed Minkie boiled ORGANIC chicken. That night, we fed Minkie the boiled ORGANIC chicken. Within two days, his stools were normal—the projectile diarrhea and dripping stopped! After three months of trying everything, the chicken was a miracle! We continued feeding him the chicken and then gradually re-introduced both the dry and wet food over the next few weeks. That was over two years ago; and “knock on wood” our Minkie is in great health, keeping his dog brother and sister in line, and sleeping on our bed every night. And my husband and I don’t sleep with a protective sheet over our heads! Today, we feed Minkie both wet and dry food, boiled chicken, and his favorite, hard boiled egg yolk in water, which he laps up within minutes. Thank goodness we persevered with this adorable cat. I tell everyone that one of my life’s regrets is that it took me to age 65 before I discovered cats—Ragdoll cats, that is!