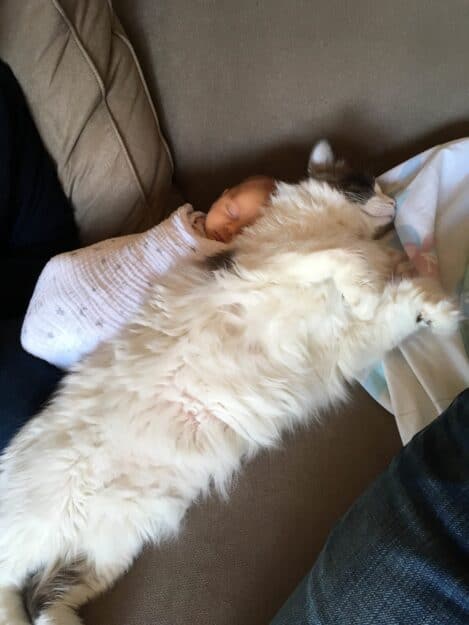 When I accepted my husband Chris’s marriage proposal almost four years ago, I thought I was also accepting a future without cats. Although I had always wanted to own a cat of my own someday, I didn’t think Chris’s allergies would ever allow it. And growing up, Chris’s family owned a cat (before they knew of Chris’s allergy) that was prone to bite, and bite hard, with no warning. As a result, Chris had developed an unhealthy fear of cats. He was firmly and proudly “team dog” all the way.

About 2.5 years into our marriage Chris desperately wanted us to get a dog, but we both knew that with our schedules adopting a dog wasn’t realistic. One day Chris started typing some simple, yet life-altering questions into the Google search bar. Questions such as “best cat breeds for allergies,” and “cats that act like dogs.” No surprise, these searches led us right to Ragdolls. The more we researched the breed the more we felt they were the perfect fit for us. 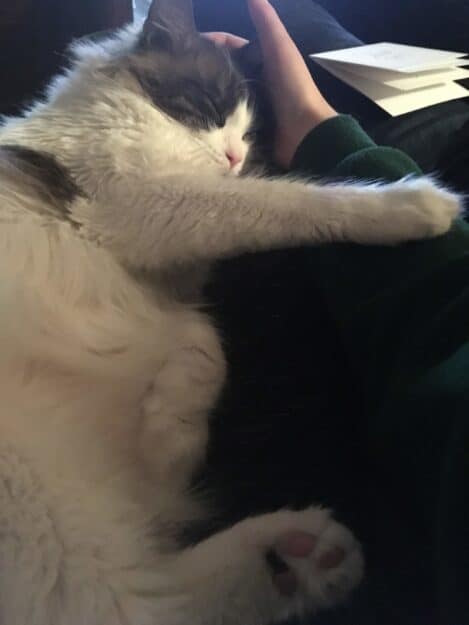 As we had been hoping to adopt a young adult cat in need of a home, we were disappointed that breeders appeared to be the only way to adopt a Ragdoll. We scoured the Internet for a breeder that was close, with a good reputation, and reasonably priced kittens. We were planning a weekend trip to pick up a four-month old female through a breeder 4 hours away when our miracle occurred. Our big, fluffy miracle named “Mac.”

My husband was the first one to spot the Craigslist listing for Mac. He was noted as a two-year-old male Ragdoll that’s good with children and loves attention. And the most exciting part of the ad - he only lived 15 minutes away! We sent a message into the Craigslist void and hoped for a response. Although it took a couple of weeks, we finally heard back from Mac’s former family providing us with more information about his situation. We liked everything we heard and arranged a visit for us to meet him and determine if he was a good fit for our family. 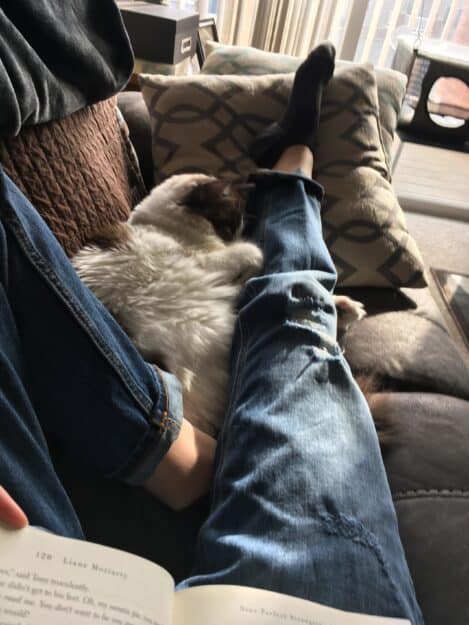 We were so nervous in the days leading up to our visit. We kept telling ourselves that we hadn’t committed to anything yet; we could always say no and return all of the supplies we had purchased. But when we walked through the doorway of his previous home and saw him peering at us from the top of the mezzanine, we both realized that we were already 100% committed. 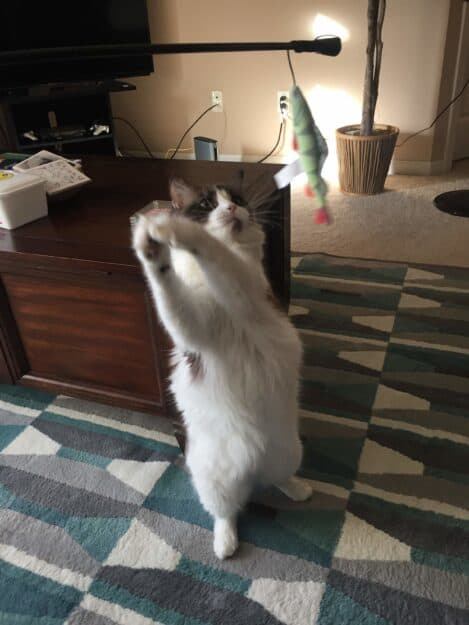 Although we would have loved to have known Mac as a little kitten, we’re grateful for the family that cared for him his first two years, and helped shape him into the wonderful cat he is today. We’re glad that they recognized that Mac was no longer a good fit for their home and made him available to us. 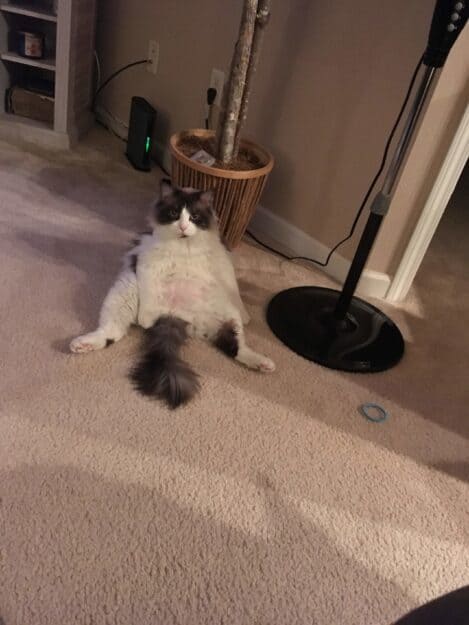 Prior to picking up Mac, we had played around with different possible names, but when it came down to it, he was already “Mac” and always would be. That’s not to say that he only goes by “Mac.” He also goes by “Floofy boy, Macadoodle, and Meow Meow,” just to name a few.

Mac has now been a part of our family for about 9 months. He fetches my hair ties and makes the cutest chirps when he’s playing with us. His favorite toy is a hair tie tied to the end of a cord that he can bat around and chase. He’s clingiest in the morning, to the point where when I’m showering, he’ll hang out on the shower ledge in between the curtain and liner. He’s also usually at the door waiting to greet us when we get home or he’ll come waltzing up to us, stretching all the way, from wherever he was napping. 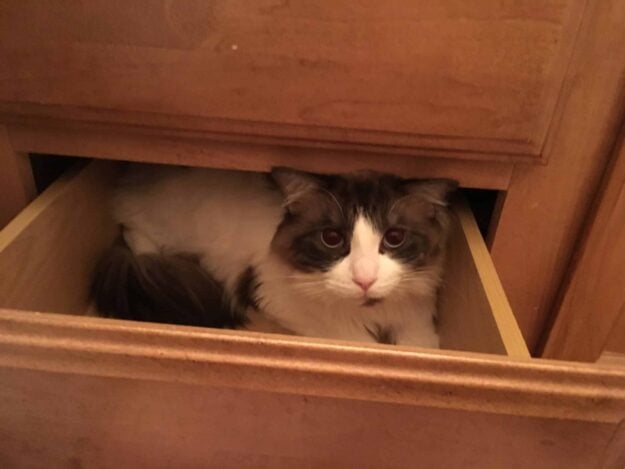 Unfortunately, Mac doesn’t love meeting new people and is usually quick to hide when someone new walks through the door. One of his favorite places to hide is in his “security drawer” in the bathroom. He paws it open himself and then hops in. However, his love of treats overpowers his fear of people. He’ll come up to whoever, whenever, if they’re holding out a Friskies treat. But he seems to love licking treat dust off people’s fingers afterwards almost as much as he loves eating the treat itself.
Mac has also become a seasoned traveler. When we’re visiting family for longer than a week, Mac comes along. As long as we give him a GNC Pets Ultra Mega Calming Formula Soft Cat Chew about an hour before we leave, he usually does just fine in the car with only the occasional meow. We’ve found that he does best when he gets a break about half-way through the 5-hour drive to roam the car outside the carrier and stretch his legs. The first place he goes once he’s out of the carrier is down around the pedals so we’re careful to always keep him in his carrier while the car is in motion, for both his safety and ours! 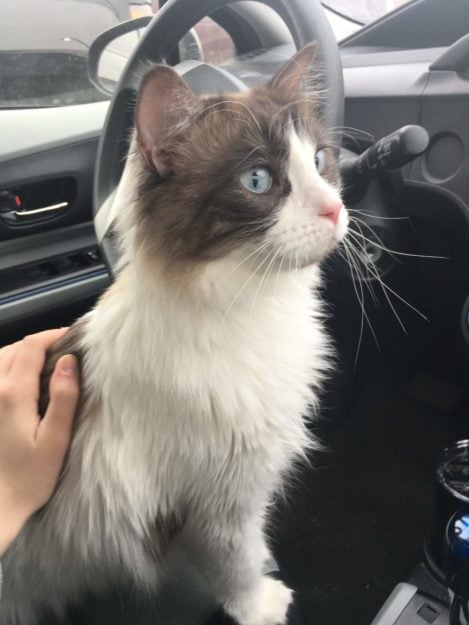 When Mac’s not playing or eating, he can usually be found snoozing on his window perch, which is suction cupped to our balcony door. Even though the view is only of our apartment’s parking lot, he doesn’t seem to mind. When we’re lucky, he’ll sleep next to us while we’re on the couch, usually with a little paw draped over one of our arms or legs. 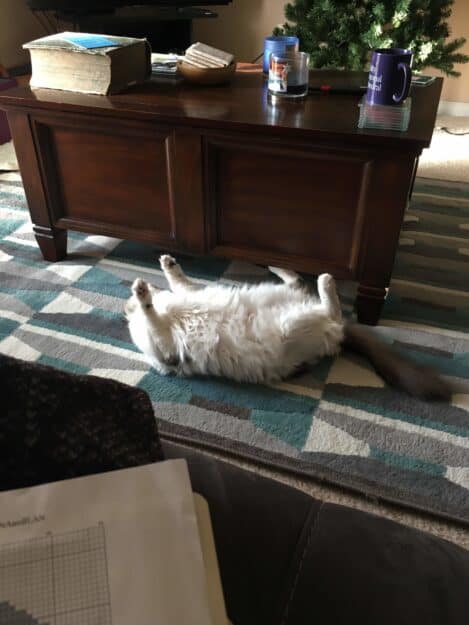 In typical cat fashion, Mac prefers to be the one to initiate cuddles. If you try to pick him up, his back paws will let you know he would rather stay on the ground. Generally, though, Mac is very docile. And when he met our one-month old niece he was quick to curl up against her little body, under close supervision of course!
Mac’s largest accomplishment to date is converting Chris to a cat lover. If asked, Chris would probably still claim to be “team dog,” which is why I don’t ask him. Hearing him whisper to Mac, “Are you probably the cutest cat in the world or are you definitely the cutest cat in the world?” is all the proof I need.