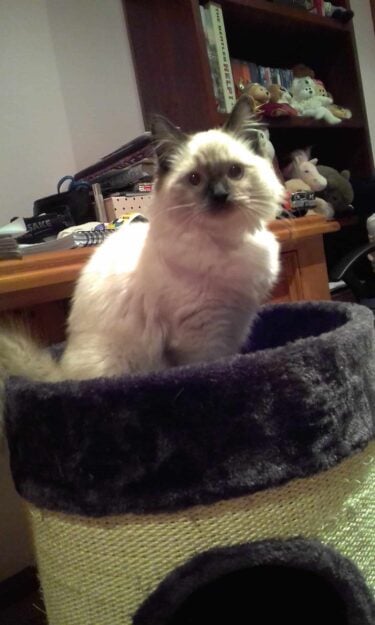 Hi my name is Emily and this is my story about Josie my two year old Ragdoll. Josie came into my life almost 2 years ago when she was nearly 4 months old.

My sister had received a kitten as a present from mum and dad about ten days prior and I asked if I could get a kitten of my own. Eventually they said yes. I decided on the Ragdoll breed because I read that they were very friendly and affectionate cats who were in some ways like puppies. I also loved their sweet faces and bright blue eyes.

Initially I wanted to go to the local pet shop and buy a kitten from there but, my parents believing they were over priced at the pet shop insisted I go elsewhere. I found a kitten on a website called gumtree however, after purchasing the kitten I realised that at the time she was not like my sister’s kitten. She seemed smaller and less playful. The guy we bought her off didn’t even recommend food to give her so the next morning I took her to the vet. The vet informed me that she was a he and that he should be given back to his mother straight away as he was only 4 weeks old.

Having never owned a kitten until a week before I felt horrible and returned the kitten to the breeder straight away. I was glad that the mum cat took her kitten back and I knew it was best that he stay with her longer. However, upon asking for a refund for the young kitten I was told he would have the money by Tuesday as he had spent it. Alarm bells were going off in my head. I wished I just went with my original feeling to go to the pet store.

Three days later after waiting for a response about the money for a whole day I decided to cheer myself up and go shopping with my sisters. I suggested we go to the pet store and see if there were any kittens for sale (much older ones too). As soon as we walked into the store a little white kitten who in comparison to my sister’s Russian Blue cross was huge. She stared at me with these big blue eyes, I knew I had to have her. We went to the counter and asked how much for the female ragdoll. 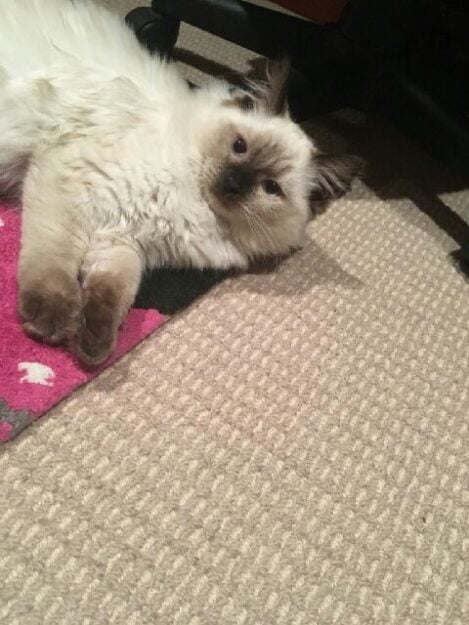 They said $1500.00 but she’s had two vaccinations and if I used the same vet as they did, I would get 10% off de-sexing. I said we’d be back in five minutes and I rang my parents to ask them what they thought. My dad thought it was a bit much but, mum said go for it. I was back in the store five minutes later purchasing the little kitten who had stared at me when I walked in and was still watching me now. It’s like she knew. After signing the papers the manager of the store told me that the night before she had been placed in the same area as the male ragdolls due to one of her staff members ignoring the fact that she was a girl. She said they weren’t sure if anything happened but, if something did she maybe pregnant. I asked her if we could be sure but, there was no way of knowing unless we got her de-sexed ASAP. I didn’t want her to be having babies at four months of age so I decided to book in for de-sexing the next day. The pet store organised this for me and then after buying her necessities she was placed in a box and we were able to take her home.

The manager of the store told me that Josie would probably have an upset tummy upon arrival but, she was fine. She walked around the house meowing for a bit and then met my sister’s kitten Ava. Ava took to Josie straight away and the two of them played until bed time. Josie snuggled up next to me and went to sleep quite quickly. I was a bit worried that she wouldn’t settle easily but, at 2:30am I woke up to lots of purring and then she bit my chin. From then I knew she was my best friend. I took her to the vet the following day and was pleased to know that she wasn’t pregnant and that the causes for going into heat could’ve been the many lights that were on in the store. The next ten days went by very quickly and she healed no problem. 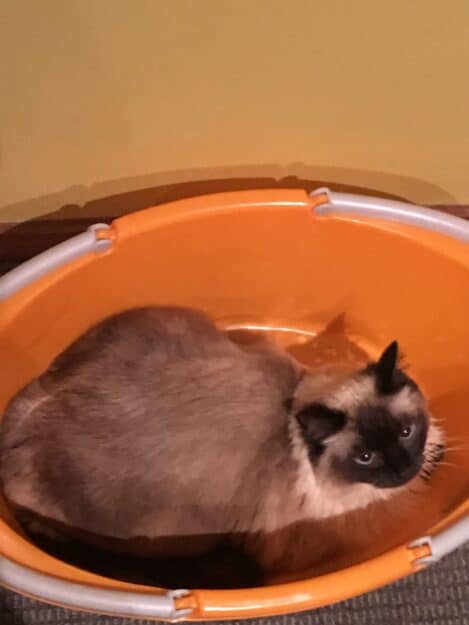 Over the next few months Josie became my best friend. After going through high school, business college and university I found friends hard to come by or hard to keep. Josie’s been with me through thick and thin. We have conversations that can last ages, she will only eat if I’m in her company, she follows me from room to room, plays fetch, cries if there is a door between us or if I go outside to put the rubbish out she will cry like she’s mourning for two minutes and then go back to normal once I come back. She will wake me up at 3am for cuddles and a chat and then go back to sleep at my feet. She gets along very well with dogs and will follow our pug Frank around the house in an attempt to play (I don’t think he sees eye to eye). 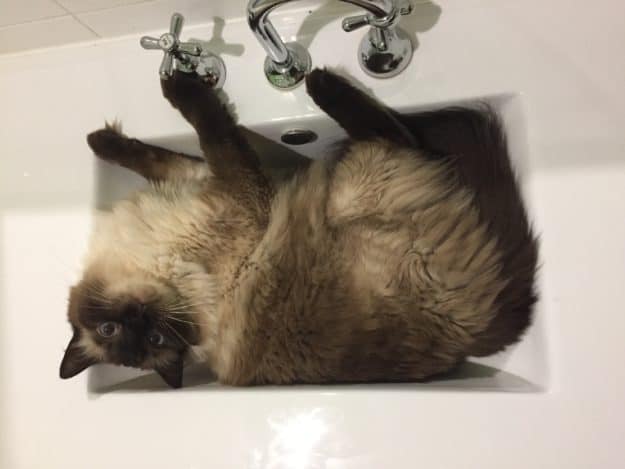 Josie loves her laser pointer, her pink mice which have cat nip inside, her tunnel, her cat tree and napping in wash baskets or on small shelves. She enjoys sitting in the shower and licking the water coming out of the tap or lying in the bathroom sink. 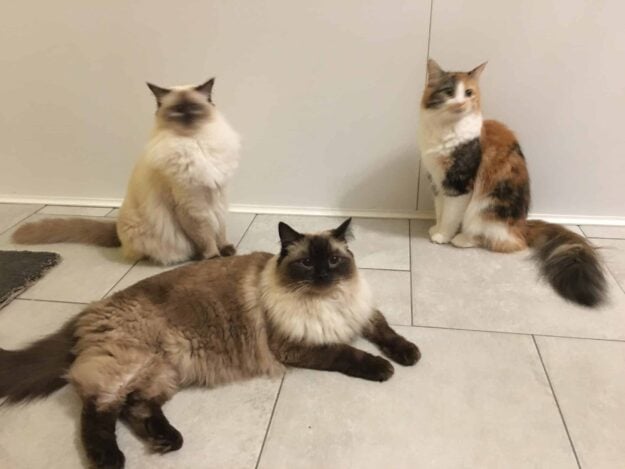 She enjoys sitting on the kitchen bench top and chilling with her feline pals. When it comes to bathes, she does handle these quite well. She will resist initially but, wait patiently till it is over. One-time she crawled onto my shoulder after having a bath and then climbed onto my back. Due to her claws digging in I had to crawl from the laundry into the kitchen until she decided it was safe enough to hop off and go dry herself by the fire. She is currently on Hills Science Diet urinary care wet and dry food as a week ago I took her to the vet due to suspecting a UTI. There was no traces of blood or bacteria but, they did discover struvite crystals. The vet said because it was detected early, they should flush out quite quickly and it may have been due to a build up of minerals from her old food which was Wellness Core pate and holistic select digestive care biscuits. 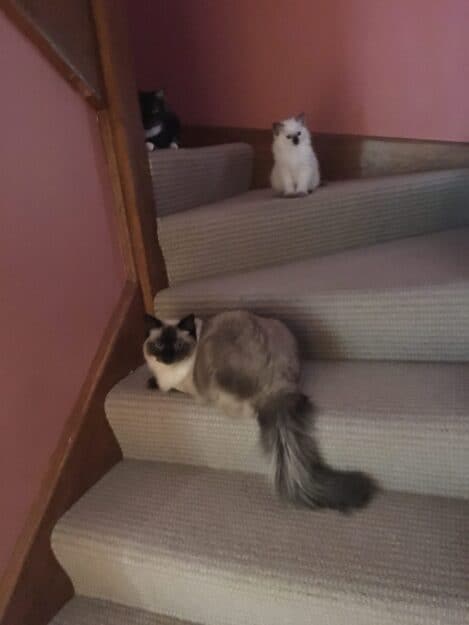 In March last year my mum bought her choc point Ragdoll kitten Charlie from a breeder. Mum loved the way Josie acted like a puppy and her sweet nature so much that she wanted her own. At first Josie was a little annoyed by Charlie, however when he cried from the bathroom she would be there outside the door or peering into the shower watching him. As soon as anyone noticed this she would run out and pretend she wasn’t there. Within two months they were lounging around the house together and have since become good buddies. In February this year Josie turned two. She looks a lot different from the little white kitten that came into our house nearly two years ago with the little black nose and I hope she has many more happy years with us. I can’t imagine having any other breed of cat for the rest of my life. 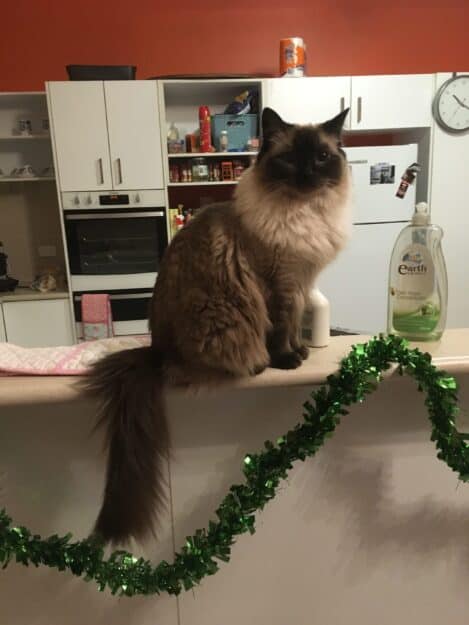