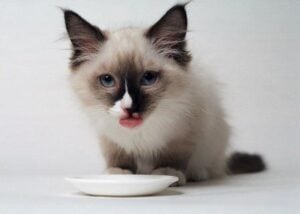 As most people say, I decided on a ragdoll after carefully researching the various breeds. I used to have two Maine Coons, and although they're also wonderful, I wanted a different breed. I guess I was still drawn to the "gentle giant" thing. When I first saw Wendell as a kitten, the breeder explained that he was "mismarked," as his blaze wasn't straight. But I've never been attracted to the norm, anyway. It was love at first sight. That blaze was symbolic of a lightning bolt, as kitten Wendell was a wild one! He would tear around my apartment in a literal blur, spinning and slamming toys along the way. He enjoyed stalking visitors, climbing legs (I warned guests about shorts), and running up and down my legs under the cover at night. (I'd just wince and bear it.) He loved to rub noses, and occasionally he'd take mine gently between his teeth. He had big lynx ears; those feral-looking tufts are still there. 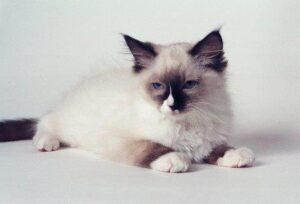 A friend of mine, who works as a photographer for The New York Times, photographed Wendell as a kitten. Two of the photos from this shoot wound up in Workman calendars, one in the 365 Kittens a Year (2004, I believe), the other in a 365 Cats 2014 Page-A-Day Calendar a few years later on the date March 18, the birthday of my other ragdoll, Fitzgerald. (Happy coincidence!)

After Wendell was neutered, he calmed down quite a bit. Per "standard" ragdoll behavior, he'll go limp in my arms when I hold him, and he'll usually come when called. He races to me when he hears his name in a whisper or if I hog-call him: "Huh-WEHHHN-dell!!!" His arrival is always preceded by a "Here I am" trill. He loves being petted, especially under his chin and at the top of his chest, and he'll purr loudly and endlessly. He loves ear rubs and tummy rubs. He has a rather large 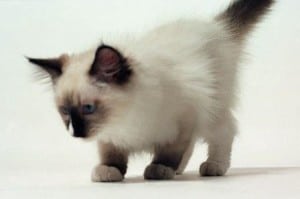 snout, and he loves it when you rub a finger up and down along the length of his nose, something he'll instigate himself. He has a very throaty, trilly purr, almost as if he's doing musical scales in ascending, then descending order.

But in no way does he fit the ragdoll mold. His temperament can best be described as sugar and spice. He is the primo alpha kitty, very independent, and sometimes he isn't in the mood for affection. Although he'll usually be in the same room as I am when I come home from work, he is not a lap cat. If I'm home during the day, he'll often seek solitude in the far reaches of my apartment. And just as often as I notice his absence, he'll seek ME out, which means a lot more to me than his being available at my beck and call. 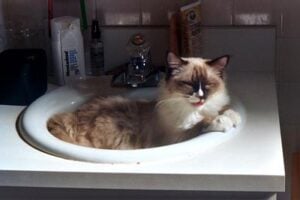 My boyfriend and I are wary when he gets into the licking mode, as three or four licks on the hand are  sometimes followed by his teeth around the wrist. I think of that commercial where the owl couldn't wait to bite into a Tootsie Pop: "How many licks does it take…?" But my boyfriend put it best: "It's when you go to the doctor's and you're prepped for a needle with the gauze pad of alcohol—dab, dab, dab, dab, OUCH." He's still one of the fastest cats I've ever seen—when he chooses to be—and excels at Bergen Turbo Scratcher (a.k.a. the ball in the circular track) and feather wand. He is fascinated by paper, especially small pieces—like the strips that you remove from the Netflix envelopes—which he'll chew up and sometimes eat (when I'm unable to stop him). He'll sit fascinated as I balance my checkbook, eyeing the statement and canceled checks. One time he even made off with one. 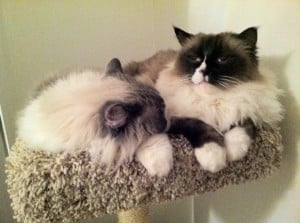 When he was about six months old, I bought Fitzgerald from the same breeder, and Wendell immediately took to him, showing him the ropes. He'd often—as he does to this day—chase after Fitz and/or instigate tussles. At one point I took Fitz to the vet for fear he was getting whaled on a daily basis. But the vet was quick to point out Wendell's "battle scars," showing he got back in return, which made me feel somewhat better. By the same token, Wendell has always been very "mature," when it comes to his brother, as if he understands the age difference. Until today, whenever I engaged them in play, Wendell will sit back and wait for his turn. Wendell is extremely protective of Fitz. When guests and neighbors are making a big fuss over Fitz, Wendell will hover nearby, watching him guardingly, every once in a while looking up at me as if to say, "Are you seeing this? Is this okay?" He is just as 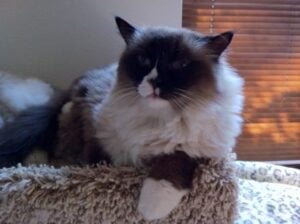 protective of me, watching from across the room when I have visitors, especially people he doesn't know.

Wendell is now 12, and he and I have our routine. Mornings he'll jump on the toilet, whose lid is always closed. (That's because he once threw himself in during one of his kitten rampages, only to fly right back out.) At first he'll watch me putting my makeup on, but it's not before long until his meowing (a rather loud, piercing RAH) begins. That's because it's time for his "wah-wah," which he'll only drink if it's in his special cup. Bedtime he's right beside me, usually stretching out horizontally till I'm relegated to the very edge of the bed. He is king of the castle, often found on the top tray of the cat tree in my bedroom, in his favorite sleeping position, stretched out on 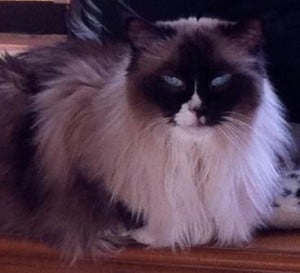 So that's Wendell, part lion/part Tazmanian devil. You might not see it in the photos, but Wendell has a very human expression, and is very much an individual. He may not be the stereotypical ragdoll, but (like all of them) he is indeed special. 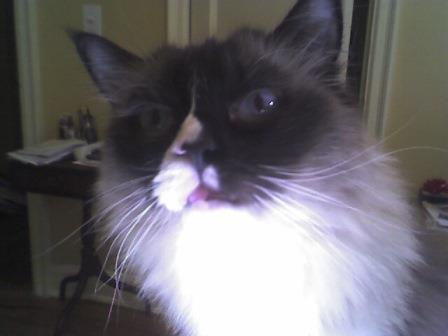 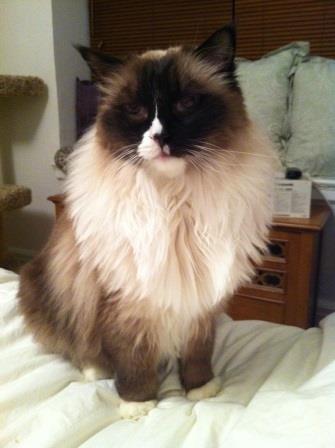 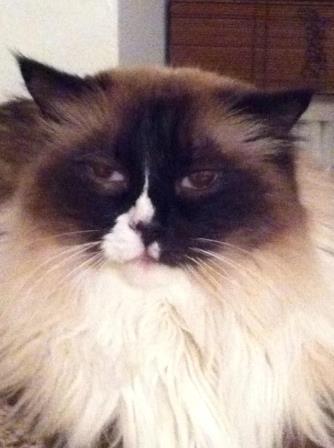 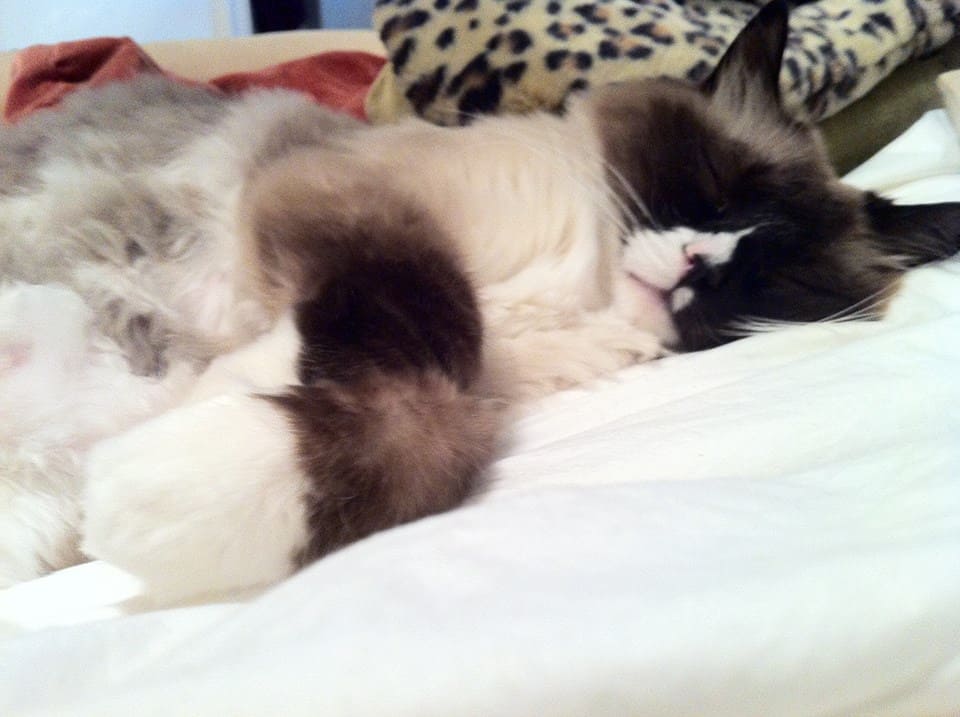 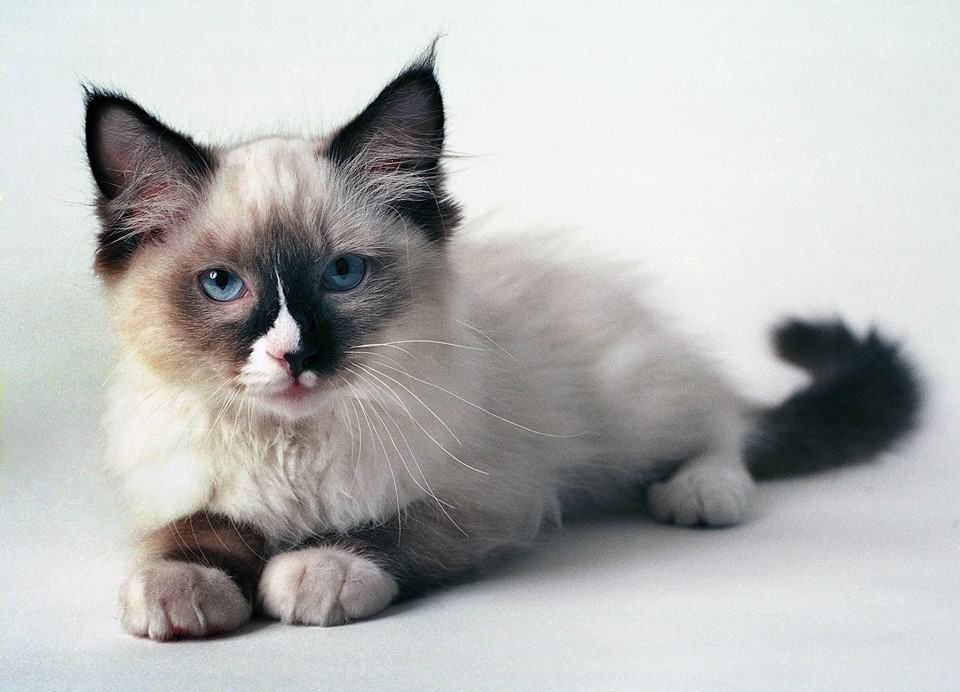 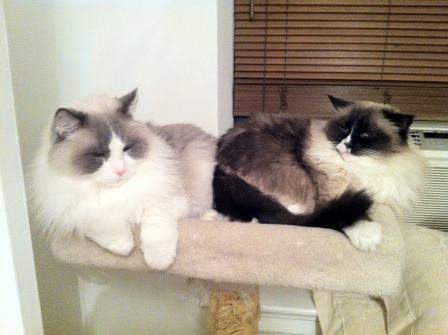