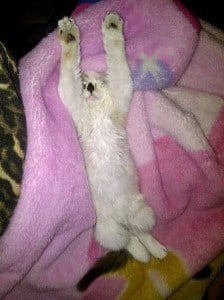 The best thing about becoming homeowners is that we could finally get a kitten to go with the house!

My mother (who is always right about everything) told me to get a Ragdoll. I side-eyed her at first, having never heard of ragdoll cats. Ma said that ragdolls are good with kids, so my young daughter and I began researching ragdolls online.

My husband assumed I was shopping for furniture and other household essentials, but that wasn't the case. I wanted a cat more than a couch, and discovered a breeder in the area who had a ragdoll mix for sale. Maddie and her littermates were not papered because her parents got together when the breeder wasn't looking. The breeder assured me that the mom was a full ragdoll, but the paternity was...unclear. 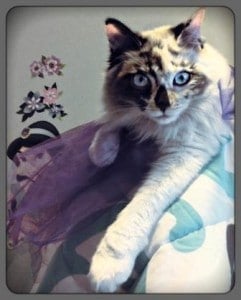 Maddie's unique markings, like her chocolate-chip nose, freckles, and peachy-spotted ears, keep changing as she gets older. She's become a favorite of our vet, who is always amazed by Maddie's latest display of random genetic expression.

As a kitten, Maddie was mostly white with a black nose and bright blue eyes. We named her Madeline Maria; "Maddie" for short. She made herself right at home, getting underfoot, hogging the bed, and lounging on table and countertops.  She loved to talk and ride around on our shoulders.

Her temperament was unlike any cat I'd ever seen-- she had to be wherever we were. Two years later, Maddie continues to invite herself to dinner (often helping herself), crashes tea parties, burrows in backpacks and bags of dress-up clothes, and generally makes herself a part of whatever we humans are doing. Most cats would wisely hide under the bed during children's playdates, but not Maddie. She loves attention, even if it means getting lugged around as Toto when my daughter wants to play Wizard of Oz.  Maddie fetches balls, rubber bands, and wadded up socks if you throw them just right. Sometimes she gets the Crazies and tears through the place with her back humped up and her tail fuzzed out like a lemur's. When she sees me, she stops and flattens out until she feels perfectly invisible. Her 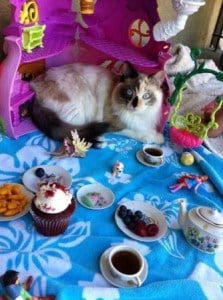 eyes grow into black marbles. I wait until she's motionless, all fierce and bat-eared, ready to ambush. I lean forward and whisper "BOO!" and the kitty gymnastics that ensue are just hysterical.

This year, Maddie helped me do my taxes. She shoved aside stacks of paperwork so she could comfortably wash her britches, and kept tackling my pen. The IRS received a wrinkled, wadded, clawed apart, chewed-up, hairball of a package from me, and understandably withheld an extra $200. Maddie loves to assist us with daily household chores, especially laundry where she sheds her whites on the darks and bunny-kicks trouser socks into tattered rags. Maddie also helps my husband get ready for work every morning. When he gets up, she bolts to the bathroom ahead of him and curls up for a nap in the sink. In the evenings, Maddie prowls the patio, preying upon moths. She's good at killing ones that are already dead. She's even better at barfing them up later. We love our girl to the moon and back, even when we're scrubbing cat barf out of the carpet and bare toes. We can't stay mad at her, ever. Right now, Maddie is flopped upside down in a patch of sunshine, sunning her ruffles. So what if Ma was right, again. Home wouldn't be home without Maddie. 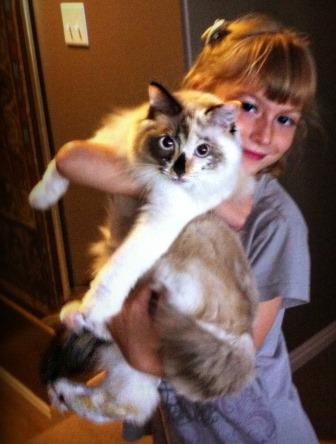 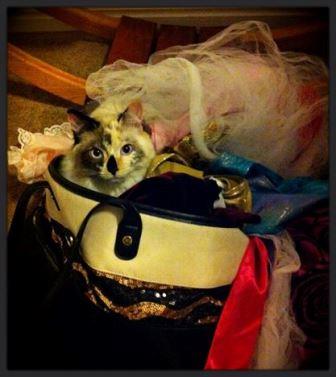 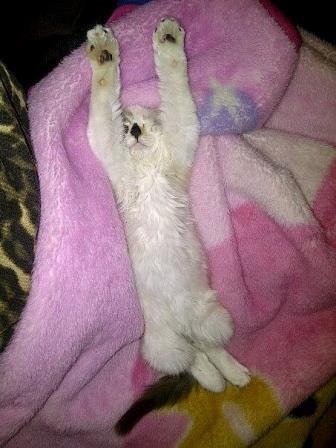 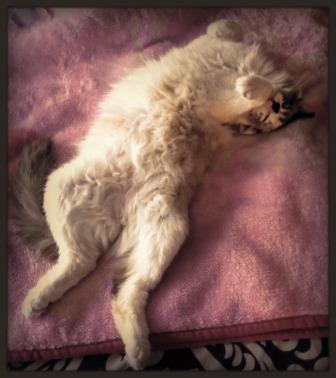 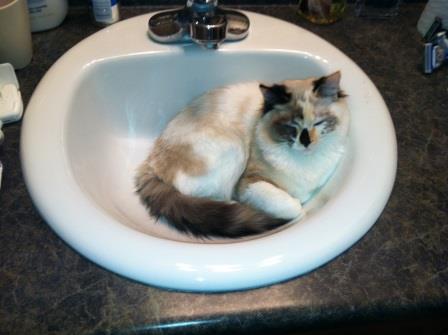 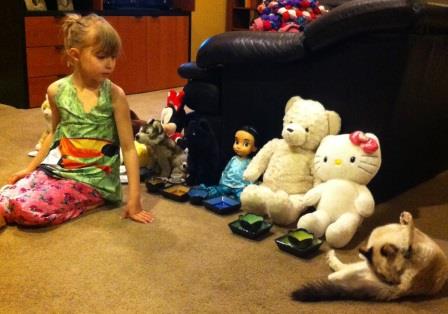 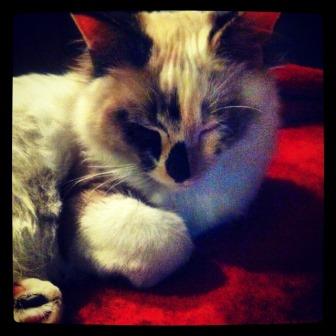 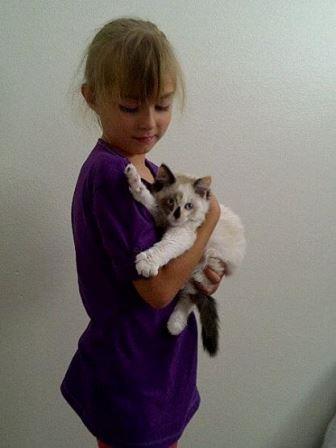 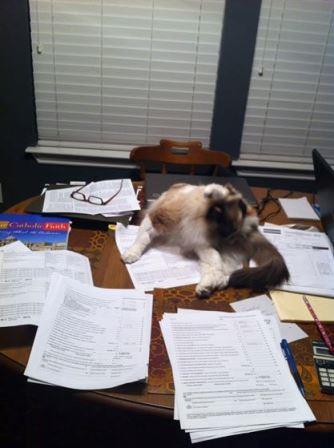