Luigi – a little brother from another mother 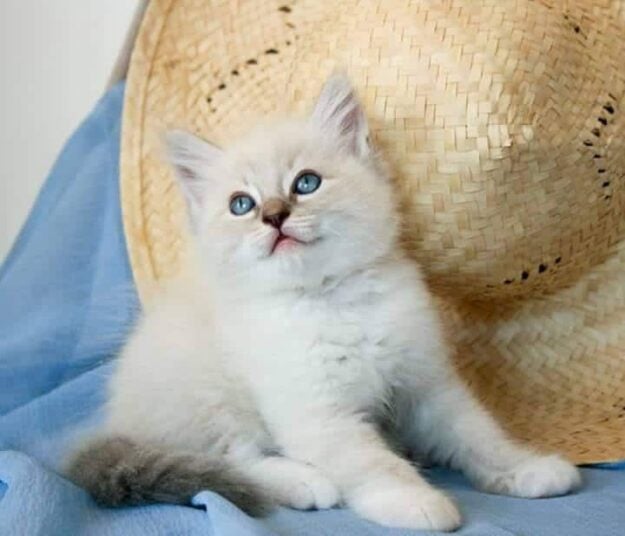 For those of you who don't know us by now, maybe the best way to share our story is if we start from the beginning. It all started when we got Jeremy, our first Ragdoll cat. His story and how we decided on the breed was published here -  so if you read it first you'll understand why Ragdolls.

Luigi's story is more like a sequel to this beautiful adventure. We wanted a little brother for Jeremy so we got our furry friend a best birthday present – a buddy…  But let me start from the beginning. 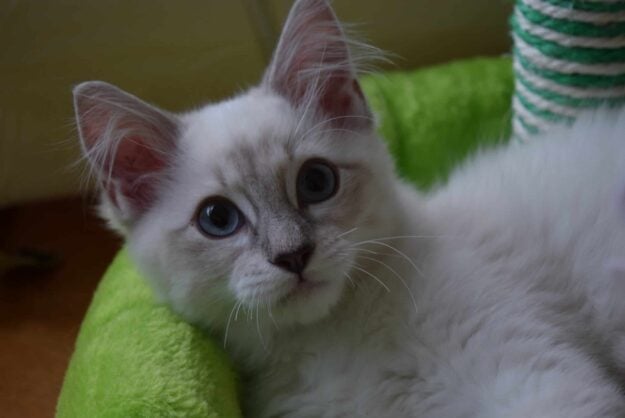 As Jeremy was growing fast, we started to notice that he craved the attention and it was normal as both of us worked full time. And although, at first, we decided to have just one cat, soon we realised that our little friend is in a need of a company. Ragdolls, unlike other breeds as far as we heard, are very friendly and attached to their human parents and tend to feel lonely if they are left alone. From the day we got Jeremy we were, well, obsessed with him hahahaha and would always put his needs first as any parent would, right? So, I started to think about getting another fur-baby to complete our family. Thankfully, my husband was on-board with the idea and I was in charge of finding that perfect little ball of fur to call our own. Jeremy is a blue bicolour so we both agreed that our second ragdoll should be blue as well (and yes, Ragdolls were the only breed we wanted). But what pattern? I knew we wouldn't care whatever fur colour and pattern we get, but hey…why not aim for the stars. We were in love with Floppycats's Trigg so the decision was to try to find mitted lynx. 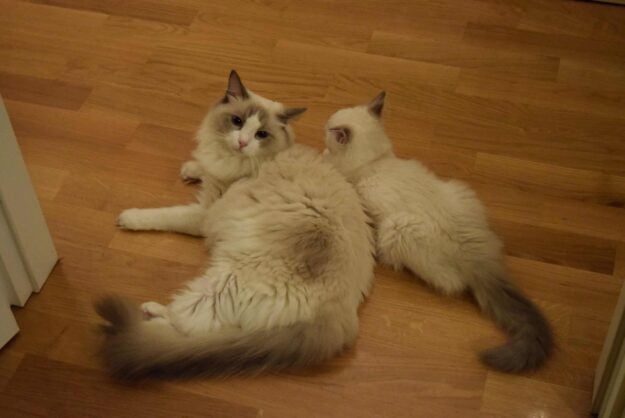 I searched all over Europe – we are in Croatia so there weren't many breeders with available kittens and I needed one NOW! After weeks of searching (and when I search I can be extremely thorough) and contacting all kinds of breeders, during chat on one of Facebook groups about Ragdolls, I came upon Eleonora Angeloni and her Silkycloud's Ragdoll Cattery. She had two beautiful blue lynx mitted baby boys and after seeing their photos we were in love! The issue of her living all the way in Rome didn’t stop me. Ohh no no no! It just made me love and want him more! And after so many Facebook chats with Eleonora we decided to take the leap of faith and go with the one of her kittens. We chose one that looked surprised on all the photos hahahaha. His little mouth were always open and his face made me laugh every time I would look at him. And the more I was looking at the photos of that little lynx Ragdoll rascal I knew he was “the one”. It was summer in Croatia, beginning of July and this little guy was ready to move in August. So we put our holiday plans on hold and started planning on the best way to get him to his forever home. Jeremy was of course in complete oblivion about what was going on hahahaha. 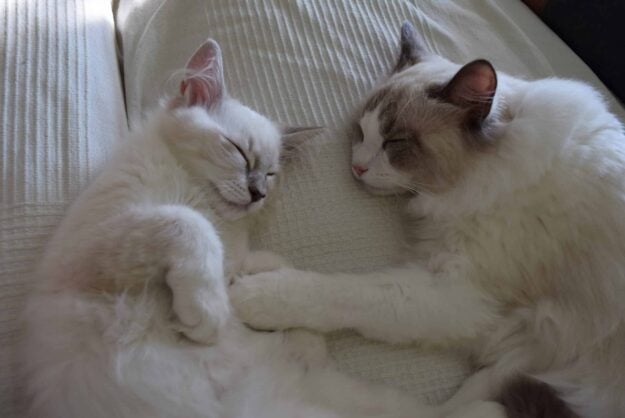 We had so much to do before little guy joins our family!! We decided to name him Luigi – a nice Italian name for that charming blue-eyed kitten. The name suited him perfectly  and then came the difficulties – Luigi was in Rome and we were in Zagreb, almost 900 km away and we didn’t want to go with Jeremy (at that point we didn’t have anyone to take care of him while we were away). Thankfully, I managed to find a pet relocation company Linora Live Animal Transport Company that could help us but their itinerary didn’t work for us. If they were to take Luigi in August we had to move all the vaccinations at least a week sooner than was planned. Or they could take him one month later, which we didn’t want – we wanted the two boys to bond as soon as possible. So there I was, typing with our breeder and then the relocaters going back and forth with all the information both parties needed. It was an extremely exhausting week because there were so many answers that had to be dealt with and a lot of paper work. But Eleonora helped us a lot with all of Luigi’s papers done in time and there we were, one Friday evening waiting for her message to let us know that Luigi was on the move. We couldn’t sleep, we couldn’t stop grinning from ear to ear and Saturday morning finally came. At 6:18 AM on August 21st 2016 I finally got to hold my little baby Luigi in my arms for the first time. He came a week before Jeremy’s first birthday so we told him Luigi was his birthday present. 😉 There were some hissing and puffing for the first two days (Luigi was doing most of it) but then, it just stopped. And since then they have become inseparable – following each other around the apartment. They share everything now – food dishes, toys, beds, toilet (sometimes, they even go pee together hahahaha).

So now that you heard how we got this little guy, I’m gonna tell you a few things about him. His full name is Silkycloud’s Luigi and he was born on May 13th 2016. His fur colour is blue tabby (lynx) point and white mitted. And he is perfect! He was 1300 grams when he came to us but he’s been growing so fast that now, he is 5,5 kilograms (500 grams heavier then Jeremy). He’s crazy about dry food and every time he hears a kibble drop on his food plate he starts running towards it like a Tasmanian devil (unlike Jerry who is tunaholic and dry food just isn’t his thing). The one thing we noticed from day one is that he is super vocal – he meows about everything and anything. He meows to pet him and then if we pet him, when he’s hungry, when he’s full, when he wants to be picked up, when we pick him up hahahaha he’s constantly meowing (Jeremy, on the other hand, only “talks” when he’s hungry). But I guess that’s normal, being our Italian tenor. 😉 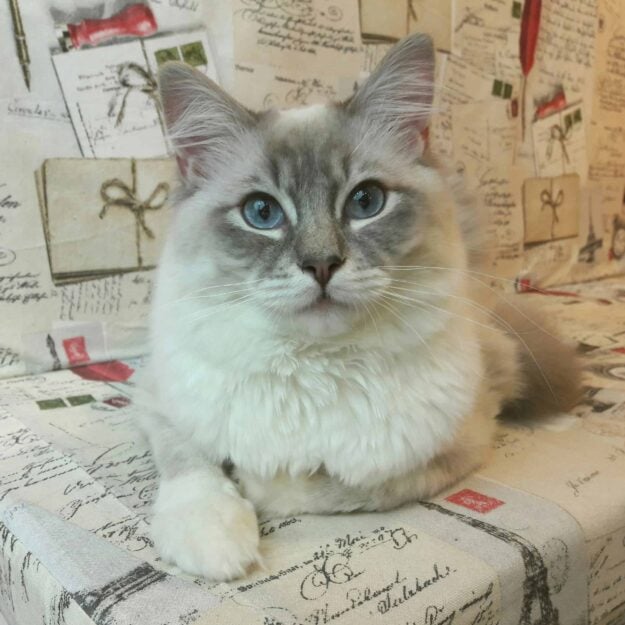 He is all about his favourite activities – sleeping, eating and playing. As far as wet food goes – he doesn’t like lamb, beef or salmon. Tuna is okay but he prefers dry food. The second he hears we’re placing kibble in his plate he’s all over the place, running towards that sweet music of food. To make sure he doesn’t eat too much, we got him a Catit Senses 2.0 Food Tree to encourage his natural hunting instinct and make sure he doesn’t devour his food. He loves to play with it and he even trained us on new usage of that thing – he runs towards us and meows and then starts to walk to his room meowing all the way and making sure we follow him. He then sits next to the food tree and meows at it and then at us – so we have to jiggle it so more kibble falls out. I don’t know if that’s the sign of his intelligence or his laziness hahaha but we love that game.

Sleeping is another activity he excels in – laying on his side for hours and then stretching like cat-harmonica is his signature move (Jeremy prefers sleeping on his back with all four paws in the air). They both love to chase each other all over the house and playing tag… if they are awake of course. Favourite toy…hmm, I would say every teaser with feathers and all kinds of rustling balls (he’s not very picky). He hates baths and walking on the leash, although, truth be told, he’s getting much better with it (the walking part, bathing is still a two-person job). One thing both of my boys are crazy about and often fight who will get to use it is their flowerbed. 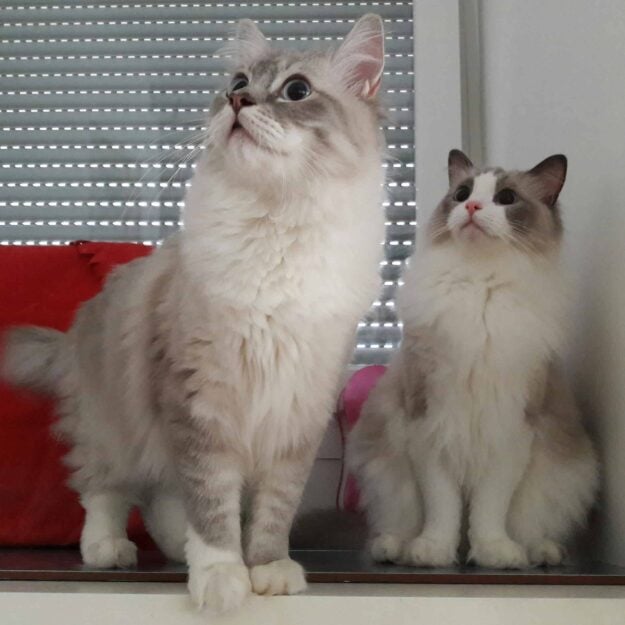 They can’t get enough of it and there’s always one of them on it… We got it thinking it would be a nice place for Jeremy and I never imagined it would be such a “place to be” for them. Everything else you want to know about Luigi (or Jeremy) you can find on their Facebook page and YouTube channel so feel free to check them out and become a part of their adventures. And for last, a few words of wisdom – if you choose to get a ragdoll, I’m sure you won’t regret that decision. They are unlike any cat breed I ever met. Their personalities are amazing and the fact they are very friendly is also a bonus.

They shed. So if you have darker sofa and a lighter coloured cat, beware – there will be a lot of brushing. They don’t like being alone, and if I knew how company is important for them, we would get two cats from the start. Also, choose your breeder carefully! We wanted one who loves animals and is very meticulous with the breeding procedures (the tests, food, grooming…). Eleonora was amazing in all of this – she helped us a lot with all the documentation, and even prior to that, he would send us photos of Luigi so we can enjoy him growing up.  Food wise, think of your pets as a members of your family – don be stingy on their food or medications (or vet bills) and always remember that you chose to take care of them and not the other way around. 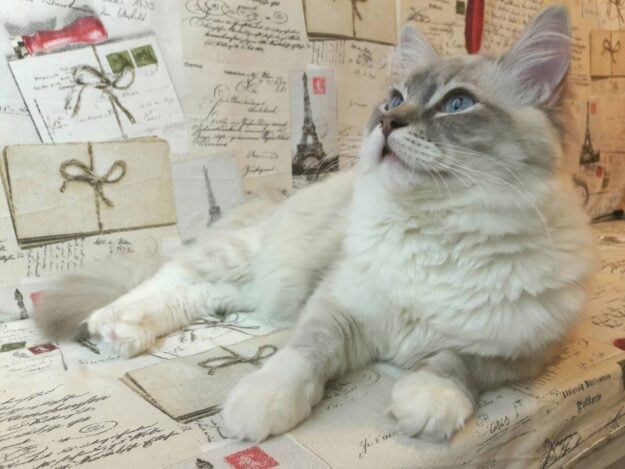