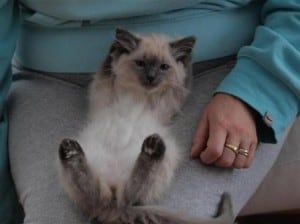 I’ve read many times that one Ragdoll is never enough. In our case after just 2 months we were won over to the Ragdoll way of life and decided that Mr Darcy would benefit from a playmate.

Our experience with Mr Darcy’s breeder had been disappointing so this time we decided to do more research beforehand and found a wonderful breeder, Tanya at TzKatzwhom I cannot recommend highly enough if you are in the UK. As luck would have it, she was local to us and a new litter had just been born so she invited us to visit. The kittens were about 5 weeks old and still so tiny, but one in particular was even smaller than the rest. Whilst the others all came up to us one by one, she stayed curled up in the corner 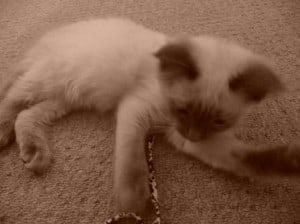 snoozing, as if to say “I don’t care who you are – this is my nap time!”. I don’t know what it was, but both my husband and I took a shine to this little one. We were allowed to hold her and she happily snuggled into the crook of my husband’s arm and went back to sleep. That was that, we were smitten!

One day I was sat at work and an email popped up from Tanya with a picture she had just taken of Sookie. It perfectly sums up Sookie’s cheeky personality which we’ve come to know and love and I still smile whenever I see it!

Each morning I am woken by the ‘Sookie smoosh’ which is a series of furry headbutts to the face. If this doesn’t do the trick, she will swat my phone off the bedside table and paw at the covers purring loudly until I get 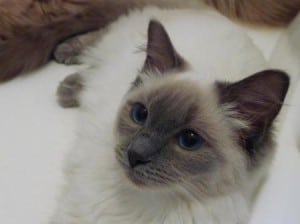 up. On more than one occasion when I’ve pretended to be asleep she has actually burrowed under the covers and then patiently waited by my feet! My husband thinks it’s funny because Sookie never wakes him. However she IS obsessed with his feet and is ready and waiting to pounce if he dangles a foot out of the bed!

Next she will run to the bathroom and vault into the bath then meow until I turn on the tap for her morning drink. After all this she’ll happily go and curl up in her own bed for a few more hours of nap time – that’s irony for you!

Sookie is our little furball of fun and mischief! She is now a year and 5 months but is still a kitten at heart. 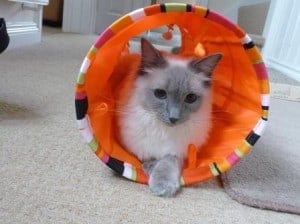 Sookie in the Cat Tunnel

Everything is a potential toy and needs to be investigated. If there is a shopping bag on the floor, she will dive in it. When I’m washing the floor she is chasing the cloth. If the wardrobe door is left open, she will be in amongst the clothes making sure they are suitably ‘furred’! She loves to climb onto the sofa and bat at the blind cord, and is always pouncing on an unsuspecting Darcy then running off to make him chase her.

Her all time favourite toy is the common garden stone! I don’t know how she sneaks them in but we find pebbles in random places around the house and she will paw them around the house late at night. 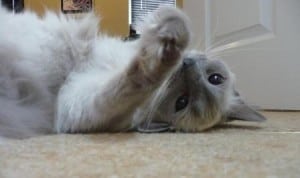 She has had a great effect on Darcy and taught him a thing or two. We had installed a cat flap and he just could not work it out. When Sookie arrived, she just walked past Darcy and bopped it open first time then stood on the other side meowing to encourage him to follow!

For all of her lovable mischief though, she is also a complete cuddle monster and is so affectionate! If you rub her belly she will curl up around your hand and purr like an engine for hours. She also has the ‘puss in boots’ eyes and will gaze up adoringly at me, which never fails to put me in a good mood. She puts complete trust in us and lets us trim her claws and give her tablets without a murmur of protest and is so gentle that I don’t think I’ve ever known her to scratch or bite. She is a dainty little girl with a big heart and personality and we love her to bits! 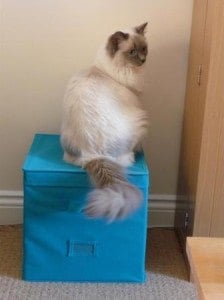 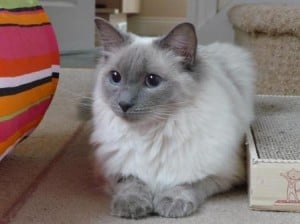