×
Home » Ragdoll of the Week
Her Majesty, Queen Ulalume (Oo-la-loom) is the Queen of my Universe. When I looked on O Canada Ragdolls in January of 2020, I was not expecting to see a little cheeky face staring back at me, so obviously enjoying the camera and being center of attention.At just 3 months old, you could tell she was meant to wear a crown! I instantly fell in love & just knew that after losing my beloved black cat, Nevermore, and German Shepherd, Dante, in such a short amount of time, she would heal my heart. 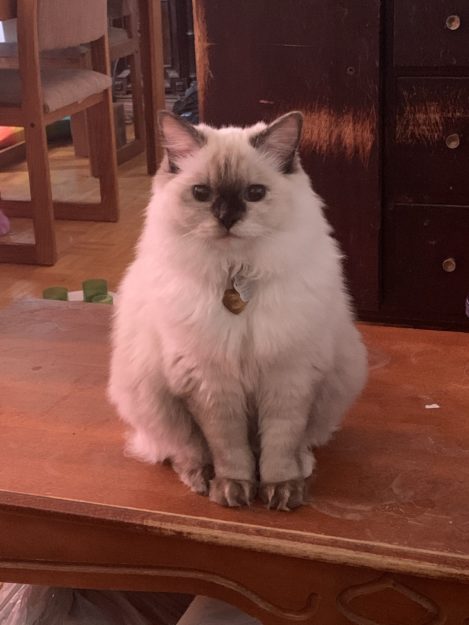 I always wanted a cat that was fluffy, and I could brush out. Then I found out about Ragdolls from author Anne Rice, whose two were so beautiful, I just knew that I had to have fluff ball just like them! I don’t really know why I was so adamant about having Ulalume, because I had seen other kittens on the site before…there was something in her beautiful jewel blue eyes. 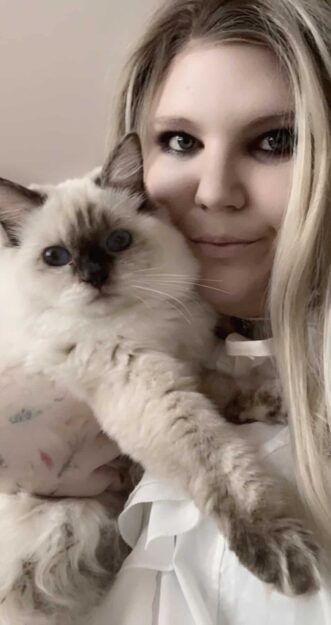 Due to her sooty feet and face from being a seal tortie point, her name was Cinderella. But when I brought her home, she was my little Ulalume, so named for the poem by Edgar Allan Poe. I’m obviously a fan. I referred to her as my little princess, but she made it apparent she required a higher station than that. 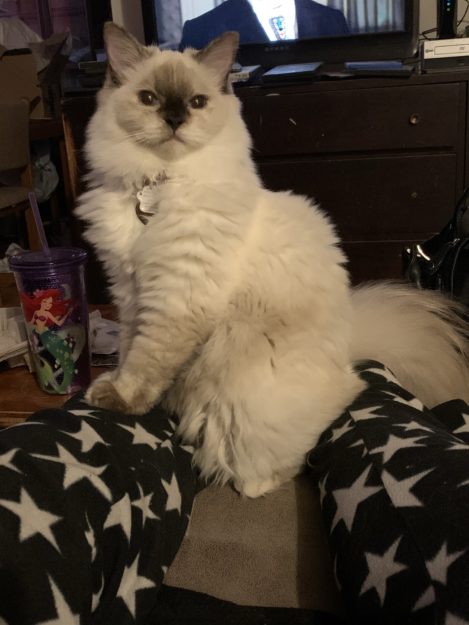 Her birthday being on November 3rd, 2019, she’s just a year old, and I can honestly say that time has passed so quickly, and she’s grown into a beautiful little lady. I remember when I picked her up from my breeder, she curled up on me and fell asleep on the long car ride home.So tiny, I put her in her carrier for coming into the apartment and when I opened the door to it, she walked out like she owned the place. Who am I kidding? She owns the place. We call her Queen Ulalume, because legit, she’s royalty and runs this place. 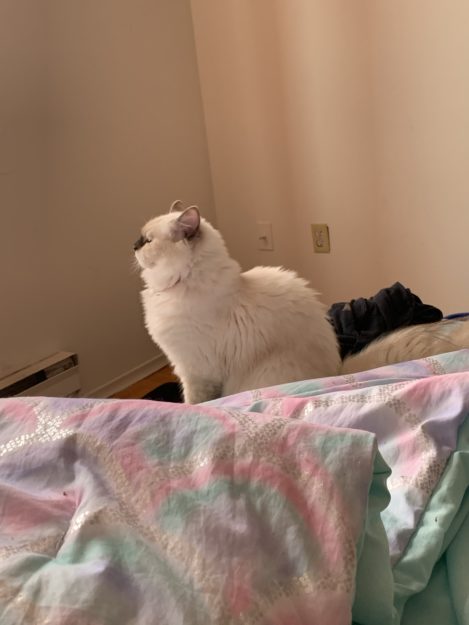 I submitted her for Raggie Kitten of the Month & she was Miss May! I’m so glad I can do a little update on her, since she’s really come into her own and has a very unique personality. It’s why I love her so much!She’s very confident and loves attention; all eyes MUST be on her. She also adores her picture being taken and will pose for the camera. She walks with a majestic grace, her floofy tail whipping about behind her. She’s not one for meowing, but she does chirp quite a bit, especially when she’s watching the birdies from the window fly about outside. 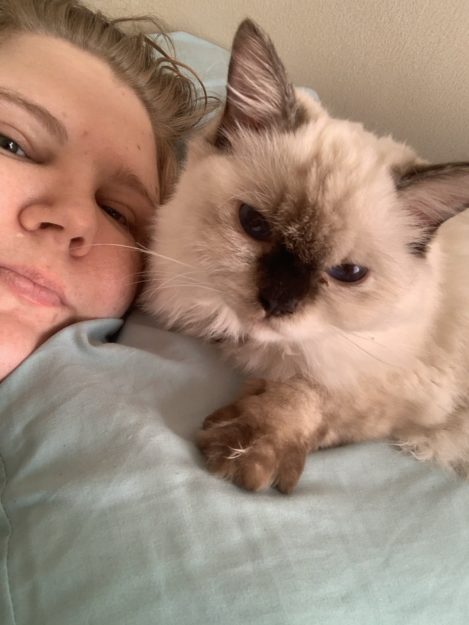 Due to boredom, she did get a little broody and aggressive at the 6 month mark, but that was remedied when we brought Binks home in August. She’s mellowed quite a bit, but you can tell she’s the dominant personality out of the two. They play wrestle quite a bit but love to nap together the most.As she is one for vanity, she loves to be brushed out. We use a grooming glove for her body, but a brush for her bum and tail, getting her fluffy white coat perfect. I actually do it daily, as it gives us time to bond. She also loves to groom herself, bathing before she takes her afternoon nap. The one thing she hates is her nails being done. I’ve been trying since she was brought home to do it weekly, but she really dislikes it, though I found it’s the nail clippers themselves, not me holding her paw. 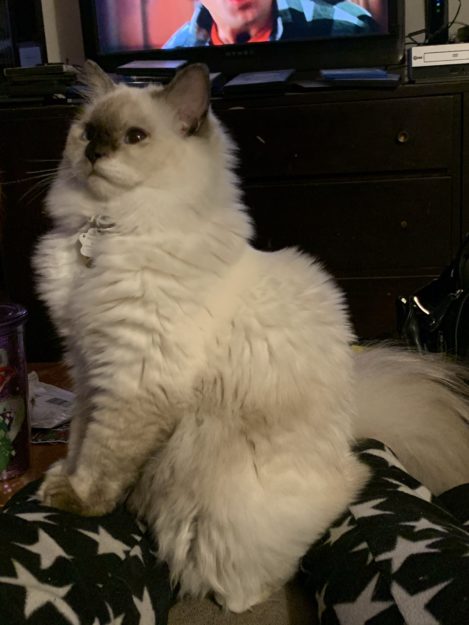 She loves to play, still with quite a bit of kitten energy. She loves the plastic springs, but my father gave her a mini-slinky and that is her absolute favourite toy to play with. She also likes to play fetch! Sometimes she even catches the spring/slinky with her paw!She’s very smart, maybe too smart. She sits on the coffee table with a cheeky attitude and knocks things off, as if daring me to stop her. She also has an affinity for plastic, mostly carrying it around while she chirps away. I’m always careful to throw out all plastic wrappings! 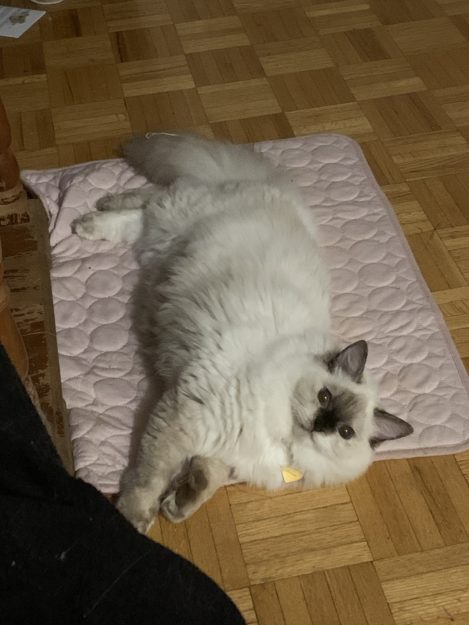 She loves to come into my room in the morning and sit on my pillow or chest, pushing her head into my chin while she kneads and purrs away. She loves the top of her head kissed when we snuggle, as well as her chin rubbed. She also waits for me outside of the bathroom and greets me at the door. Though she’s definitely my girl, her favourite person has to be my older brother. She loves when he comes to visit since COVID restrictions have lifted! 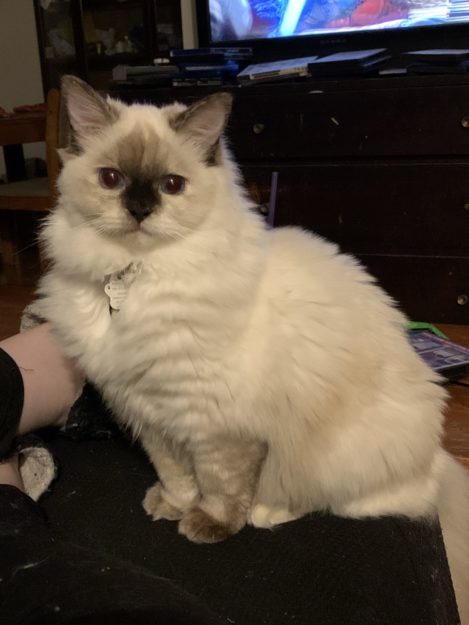 In regards to food, she will only eat chicken variety wet food, being on Instinct wet cat food her whole life. She is very picky and actually dislikes seafood—it has to be chicken, or she will starve. She loves little bits of (plain roast) chicken from my plate, but it has to be small pieces; she doesn’t like the pieces being too big. She also eats the Instinct kitten kibble with a Catit puzzle feeder, pawing out the bits from the tubes.I am a slave to her whims, but I feel very fortunate that she chooses me to be her human!Do you have a Ragdoll Kitten or Cat?  Consider submitting your kitty!  Ragdoll of the Week submission guidelinesRead more Ragdoll of the Week submissions.