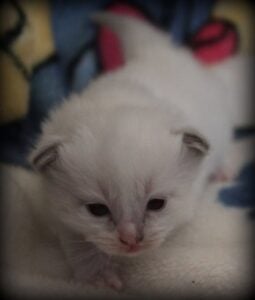 My journey to getting a Ragdoll began after my other Cat Rocky who was 19 years old passed away. He was a domestic short hair cat who didn’t mind cuddling, my other cat at the time also a domestic didn’t like cuddling at all or being around people in general she would stay in my parents room and hardly venture outside it. I began researching different breeds who are more affectionate and like to be around people, I actually came across Floppycats' YouTube channel at this time. I began looking up breeders in my area I found a couple who interested me, I sent messages off to them to inquire about getting on a list and finding out what would work for my family as we still had the one domestic female cat in the house. 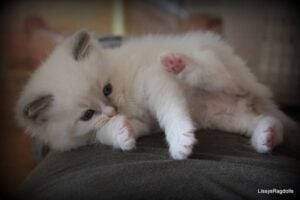 This is how I found Elissa at Lissy’s Ragdolls here in Alberta Canada, from my first interaction with her through email she was great, answered all my questions and never had a problem sharing her expertise with me. I would totally recommend her to anyone and have actually gone through the process twice with her. My Little man was born on May 19 2015 His name is Styxx he’s a blue bi-colour Ragdoll. I’ve had him since he was 12 weeks old.  I named him Styxx after a book Character from one of my Favourite books, its one that just kind of sticks with you and makes you want to read it over and over again. 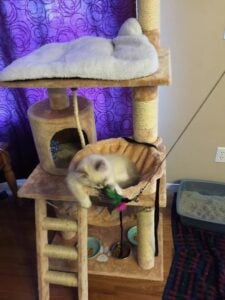 He’s 1 year and 8 months old now, he’s such a character, he loves to go outside he meows at the door to be let out on the deck. Except right now cause its super cold here and we have a foot of snow on the ground. He goes out on a harness and leash and has no problems on them. His favourite toys are feathers or Neko flies. He also like boxes, baskets, or laundry hampers. Also yeeoww catnip banana’s, rainbows and fishes. He’s not really cuddly however he doesn’t mind being picked up and will gives kisses, he also follows you around and greets you when you come in the door he’ll come all the way downstairs just to do it. He likes to lay beside my mom on the couch and will occasionally sleep at the foot of the bed. He’s always up to mischief one day the cupboard was open a tiny crack and he got in on top of all the dishes how he managed to do it without knocking any out I don’t know. 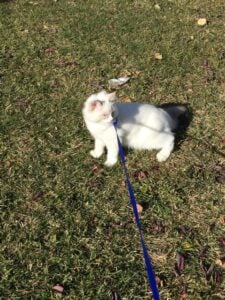 He loves to eat his Now dry food. But also loves Tiki cat Chicken which he gets morning and night. He loves treats especially Freeze dried Chicken here in Canada I buy the brand pure bites. His favourite sleeping spots are in the window perches I have for him or on the top of his kitty mansion, he also likes to sleep on the computer chair.In the fall of 2015 we had to put down our other domestic Cat as she was having seizures and we didn’t want her to be in pain. After we put her down Styxx became an only cat and he became lonely after a couple of months we decided to contact Elissa again and get another 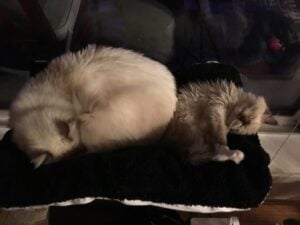 Ragdoll. She’s a Chocolate Mitted named Tiki. We introduced them slowly and they get along great and he’s not lonely anymore as he has a friend to play with. They like to sleep together and chase each other around the house at all hours of the day. I don’t really know any other Ragdoll owners but if I did I would recommend they watch Floppycats videos and invest in the higher brands, they might be more expensive but in the end they last longer and are more worth it for things like scratching post and cat tree’s or 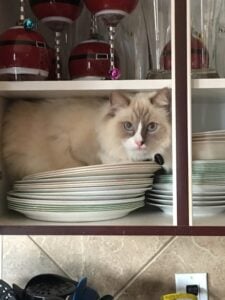 beds. Food obviously I would tell people Now as it’s a great brand or anything grain free. I tried to stick as close to what my breeder feeds as possible so they wouldn’t have a hard time transitioning into our house. Toys yeeoww catnip ones and Neko flies, Also Jackson Galaxy light up balls. As these are some of my cats favourites. The only thing I wish I could get for them is the pawnosh bowls but as they are kind of expensive and the possibility of breakage during shipping has stopped me. Over all I wouldn’t change a thing as he has brought so much joy and laughter to my life as he’s always doing something that makes you wonder whats going on in his Kitty mind. 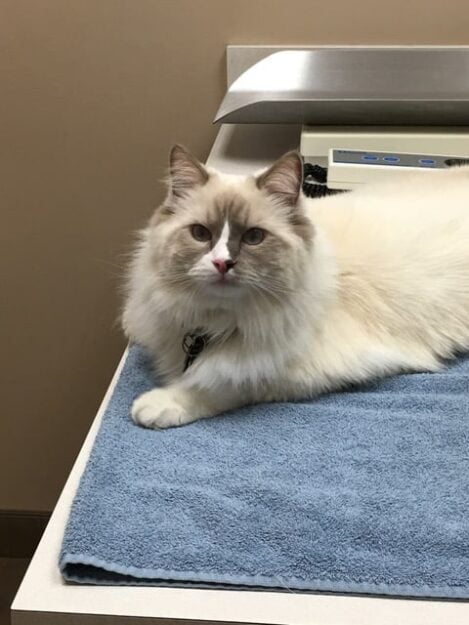