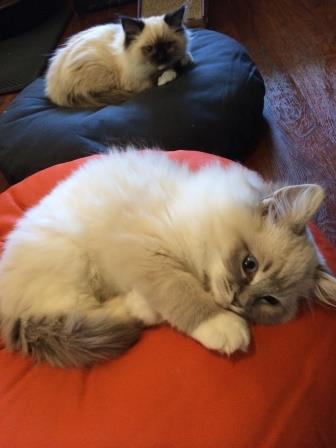 Our two cool kitties are siblings, Pepper (female seal point mitted) and Rigsby (male blue lynx mitted), were born on December 23rd, 2013. They came to us from a well-known breeder in Massachusetts.My husband and I discovered the Ragdoll breed after researching cat breeds. I was never an animal person (gasp!), but I became easily swayed after reading about their laid-back personality and nature! So, we settled on finding a Ragdoll in the seal point mitted coloring. 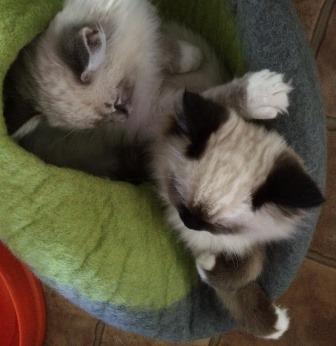 The challenge? Finding a breeder in our area (Rhode Island) with good reviews and feedback about their cattery and offspring. We found our first breeder by stumbling upon the Floppycats website and a blog post that referenced breeders. Willow Tree Rags was close by, but after a few emails there was no response, which left us a little bummed. So, we hunted for another breeder. We found Denise Cuzzupe at Lottarags in northern Massachusetts. Her responses we quicker and after many emails, we felt she was the right breeder and in early December placed a deposit for a seal point mitted baby that could be born in late December based on a pairing she bred.Then came the waiting game and preparing for a kitten (notice I said “a” kitten, not two kittens?!). It was like having a baby – we should have just registered at Petco, Hauspanther and Harry Barker and sent out announcements! As days turned into weeks, it was suddenly late December and we were on kitten watch! We were on a cruise when we got the good news – of the three little kittens born; one was a seal point mitted female! We were advised that she would be ready to come home in March and we could come see her some time in February. 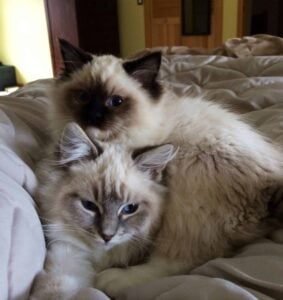 From the cruise ship to our house, my husband decided that she couldn’t come home alone and would need a “buddy” to keep her company. We contacted the breeder and fortunately for us, she loved having them go home in pairs and she was thrilled to let us have one of the brothers that wasn’t spoken for.The name game began shortly after the news. We wanted names that weren’t common and different. For the male, it was an easy decision; we like old British comedies and Rigsby is name after Mr. Rigsby from “Rising Damp.” For the female, well that took forever to decide on a name. She came home with one (Rue) and we changed it after once she got home because it just didn’t fit her personality. Her new name, Pepper, is not uncommon, but fit her much better. 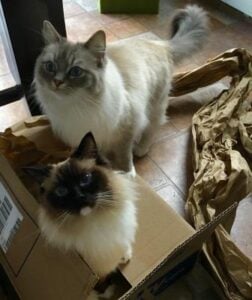 The big day arrived (March 14, 2014) and we made the 2-hour trek to bring them home. We had Jenny’s book memorized (highly recommended for new Ragdoll owners) and found that it addressed just about every question, and put us at ease – making their transition smooth.When we brought them home they were on dry food (Royal Canin) and grazing all day. After a few months Rigsby was coughing up a lot of hairballs and once we read everything on wet/raw food and hearing what Jenny and followers had to say, we chose to start with the transition to wet. It was the best change we made. We no longer deal with hairballs (occasionally, but not nearly as much) and their coats are beautiful and their stools are very consistent. We feed them twice a day and use grain free Weruva, Blue Buffalo and Wellness in chicken or turkey varieties – they don’t care for fish. We alternate so they don’t get bored and find they like the pate style best. In addition, we add Pure Bites freeze dried chicken on top of the wet. For snacks, we used to use Greenies, but realized it wasn’t very nutritious, so we found grain free dry Orijen cat food and call those “treats” that they get twice a day after they eat. 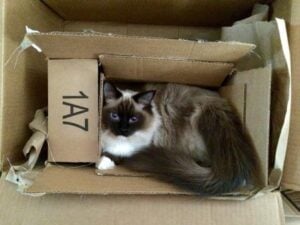 box for a bed

Today, at three years, they are hysterical and lovable, yet totally opposite as their colors. Pepper is energetic, loves attention and will “peep” if she’s not getting what she wants. She lies on her back all the time, loves special treats, belly rubs and chasing crinkle balls. Rigsby is a calm, sweet, quiet kitty who lets you pet and love on him only on his time. 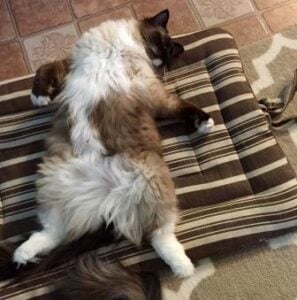 He enjoys fetching straws and zip ties (big long ones) and hanging on the basement door handle in hopes he can open it…we have no idea why he’s obsessed other than it has a lot of hiding places for him, which he loves! They both love boxes, bags, catnip toys (the bananas are the best), feathers on strings and hanging on their catio in the warmer days. They have favorite beds since they came home from Waggo (circle dog beds), Harry Barker bedrolls (for dogs!) and love their wool cat cave/beds. 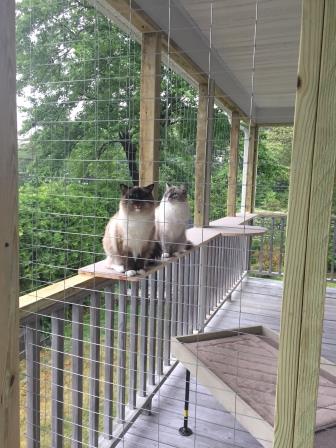 Like most cat owners, we spoil them. Our family calls them high maintenance cats! I was never in the market for a pet (we travel, I am obsessed with a clean home, like black pants without hair, etc. LOL). However, after bringing these two into our home, I can’t believe we didn’t do it sooner. Sure, we have a Dyson, two Roombas on clockwork and stock in those 3M sticky rollers, but the joy and laughter they bring to us every single day is totally worth my second job as a cat hair remover! 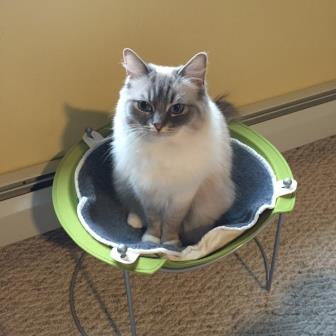 handsome in my hepper pod

Feel free to follow them on Instagram at @twocoolkittiesDo you have a Ragdoll Kitten or Cat?  Consider submitting your kitty!  Ragdoll of the Week submission guidelines