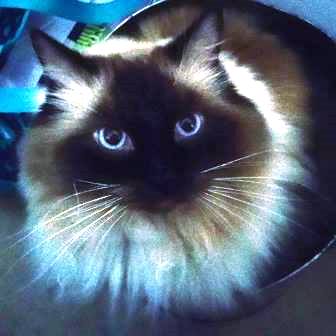 I did not know about Ragdoll cats until I overheard a coworker talking about them. She has a daughter with special needs, and wanted a cat that would be friendly and affectionate with her daughter. I asked her about it, but she couldn’t tell me much more about them. So I Googled them, and learned more about them. I was also going through a rough time at work, and I was very stressed out. I had heard that having a pet could be helpful for stressed out people, and Ragdolls seemed like a good choice. I went home and told my husband that for my sanity I needed a cat. He was somewhat reluctant, but saw how much I was struggling at work and agreed. We didn’t get a dog since our condo is 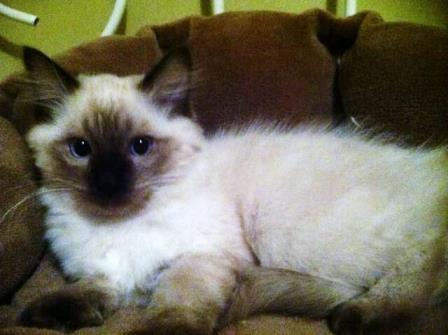 rather small and we don’t have a yard. We are also not big into dog walking in the winter time. I found a breeder by Muncie Indiana, which was about 3 hours away from my home. She had one kitten left, a boy who was 17 weeks old. He was born July 17, 2010. She sent me a picture, and I fell in love. He was precious! She asked for 500 dollars, and he was already neutered and had his shots. The breeder promised that he was registered and that I would get his papers when I picked him up. We drove down and got him on New Year's Day 2011. The breeder seemed odd, and she said that she would mail me the papers, that she didn’t 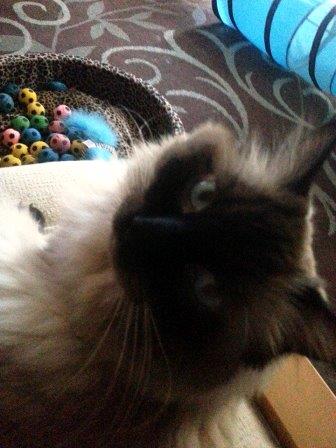 get them from the state yet. I didn’t know any better, so we paid and took him home. He meowed for the first hour, and then settled in and slept. The first three days he was in our condo he hid under the bed or in the closet. I would sit on the floor and talk to him, and look at him under the bed. He gradually got more comfortable, and I lured him out to the living room with a feather toy on a stick. He couldn’t resist playing! And I never did get any papers from the breeder.

Regarding his name, we had trouble deciding at first. My 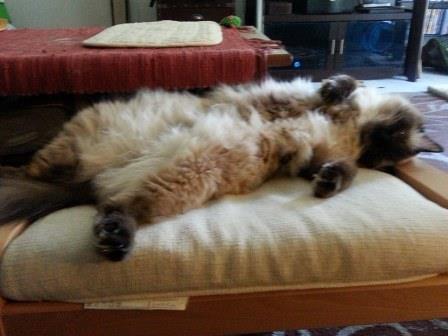 husband suggested “Muncie”, which I vetoed. He also liked the name “George”, from the cartoon dog who had a little kitten pet “I will hold him, I will pet him, I will call him George”. I wasn’t crazy about that name either, so then my husband told me about a friend’s cat from a long time ago that was a very cool cat named Hawkeye. It also reminded me of MASH, the TV show, so I agreed. 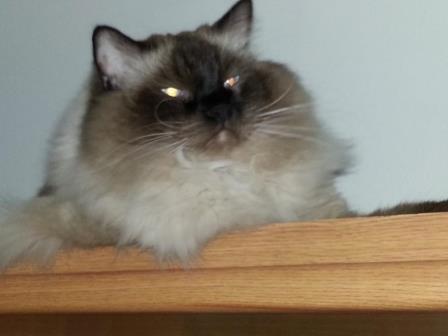 Hawkeye gives us so much joy and laughter, I am grateful for him every single day. After he became comfortable with us and our home, he started sleeping on my pillow above my head. I loved it! That lasted about 6 months, and then he started sleeping in other places. He loves to play with the feathers on the string/stick, the little rubber soccer balls we get at the pet store, and playing hide and seek. My 25-year old son Tyler lives away at grad school in Wisconsin, and when he visits he loves to play hide and seek with Hawkeye. Tyler starts chasing Hawkeye and saying “I’m gonna get the kitty!” and Hawkeye runs into the bedroom and hides under the bed or in the closet. Tyler will say, “Gotcha!” and then Tyler will run out of the room to hide elsewhere and Hawkeye will run out and look for him. This will go on for up to 20 minutes! So adorable! I play this game with Hawkeye as well. 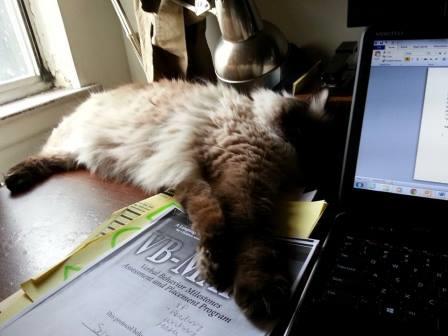 Hawkeye also loves to hit the rubber soccer balls with his paw that we throw up at him when he sits up on top of our bookshelf. He has great eye to paw coordination! He bats the balls away and is quite good at it. I am his person, and he follows me all over the condo, when he isn’t sleeping of course. In the bathroom, in the bedroom, wherever I am, he will follow me. He won’t sit on my lap, although he will share the bottom of the recliner with me. He won’t sleep with my husband and I (I think he is afraid of being crushed by my husband), but he will wake me in the middle of the night for snuggles and kisses. Hawkeye meows at me when he wants to play, or when he feels he needs fresh food or treats.

I feed him Gravy Lovers Fancy Feast in a can. I read the Catinfo.org site that Jenny recommended, and switched from the dry food that came with him from the breeder to Fancy Feast wet food. He also loves treats (Whisker Lickin’s Tuna flavor is his favorite). I also give him occasional Greenies treats for hairballs. I have pet health insurance on him, and he gets checkups twice a year, and teeth cleaning and checkups once a year. He is micro-chipped. 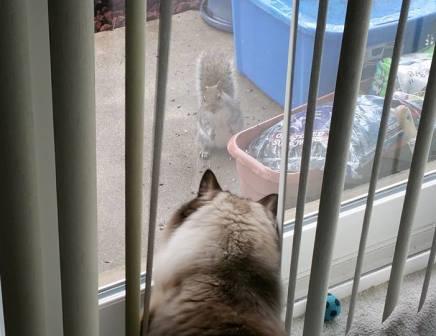 I live in a condo with a foyer and an outside locked door as well as our inside door. Once in a great while he sees an opportunity and dashes out between our feet and runs down the foyer and up to the highest (third) floor landing. I have to run up the stairs and corner him, and I carry him down the stairs under my arm like a football, pretend-shaming him for running out the door. His other favorite activity is squirrel watching out our patio doors. The squirrels (Charlie and George) know that he cannot get past the screen door, and they taunt him by eating peanuts that I put out there right in front of him. He chitters and stalks them, and occasionally will run up to me and meow, telling me about those pesky squirrels. He also enjoys birds, but they aren’t as plentiful in the winter. He is a joy, and has added so much to our lives. And after that one year, work for me has gotten a lot better.