A few years ago I started looking at the Bengal cat breed and dreamed of owning one of these strikingly patterned beauties. My daughter-in-law wanted one, too, but told me to check out Ragdolls online. I learned so much about them and their unique personalities. Holy hairball, were they ever furry! One look into those gorgeous blue eyes and I was smitten. We researched local breeders (I use “local” loosely) and decided on Ruby Ridge Rags, located about seventy miles away in Winchester, Riverside County, California. They have a wonderful web site, rubyridgerags.com, with lots of photos and have the credentials necessary for a reputable breeder. 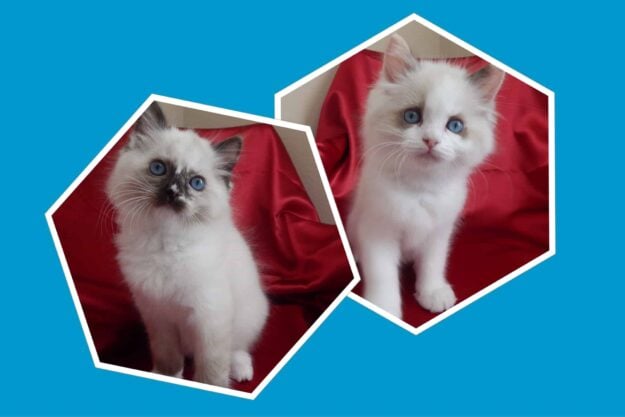 We wanted two sisters and a litter had just been born on October 25, 2014. The breeder had first dibs on the kittens, so who knew if there would even be two females available from this litter? The wait was excruciating. Then I got the call and photos in December. Yes! Two sisters and they were adorable! I told my daughter-in-law she could have first choice. I tried not to get my heart set on either one but I failed miserably. I fell in love with the one with the black ears and darker face before even seeing her in person. 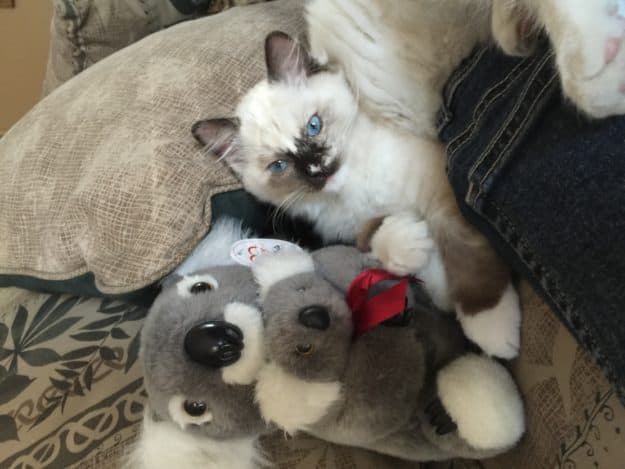 Finally I was able to pick them up on January 13, 2015. They were eleven weeks old and oh, they were incredibly cute, and so active! The darker one melted my heart—oh-oh. Ruby Ridge gave me the health records for both already-spayed and vaccinated kittens plus their own Hello Kitty tote bags with toys and sample food. It had been a long drive to Ruby Ridge and an even longer drive back home, with the kittens mewing in their carrier. When my daughter-in-law saw them she immediately chose the whiter one, a seal point bi-color tortie. Yes! My granddaughters named theirs Zoey. My husband and I named ours Skye after a character on the TV show Agents of Shield. Her papers identified her as a seal point mitted tortie. Her orangey color and super-cute heart on her forehead brightened as she got older. 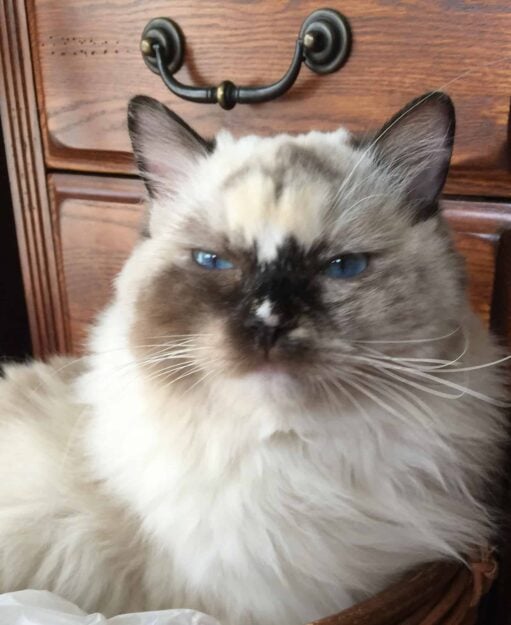 Skye made herself at home right away and ruled the household from day one. I didn’t quite know why they were called floppy cats until I picked her up while she lay on the floor. It was like trying to corral a soggy strand of linguine. She was and still is a rip-stitch. She tears around the house, and now that we’ve moved into a two-story townhouse, leaps up the stairs three at a time. Unfortunately, she has the bad habit of jumping up on the second story railing that looks down onto the main floor. She meows to get our attention in case we didn’t notice. We fell into the trap of yelling at her to get down and stomping up the stairs to make her. She loves that game. She also loves hide and seek. I’ll run upstairs, hide somewhere and she’ll come up to look for me. When she finds me she humps her back and leaps in the air at me, and then she runs and hides. She knows to change up her hiding places. When I find her, I run and she chases me. We both get much-needed exercise.At her annual visit her vet said she might be a tad overweight at thirteen pounds but Skye strongly disagrees. She says she’s just big boned and extra fluffy. I groom her every couple of days using the rubber nubby True Touch glove that collects loose hair and finish with a comb-through. Or I use an awesome rake-like tool that I think I got from a Floppycats review that is no longer sold [Editor Note: Barb and Skye have the EZ-Groomer Cat Shedding Comb, however, it's no longer made]. The rake collects tons of fur right down to the skin without much pulling. She loves to be groomed. 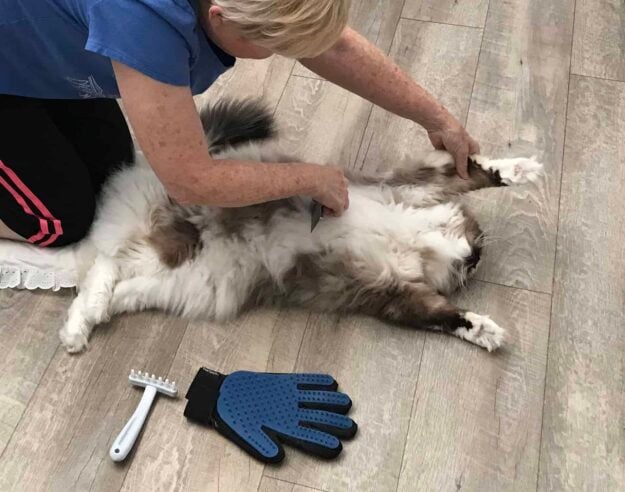 She rolls onto her back and holds her front legs up so I can get right into her pits. I keep her mat-free. Ragdoll fur is like no other I’ve ever felt—incredibly soft and downy. We’ve seen the typical floppycat darkening of fur over the years. The photo of her watching her favorite movie, The Secret Life of Pets, was taken January 2017. The one of her whole body from the back and looking over her shoulder was taken more than a year later in June 2018 and shows a darkening of the grey/brown. As I mentioned before, she has a stylized heart on her forehead that became more pronounced—LOVE! She doesn’t like her feet touched, but I manage to snip the hair on her paws every once in awhile to keep those little beans exposed for better gripping power on the railing. As far as we know, she’s only fallen off once. The thirteen-foot drop didn’t harm her in the least but we’re still terrified she won’t be that lucky next time. We take her to the groomers every six weeks for a nail trim. 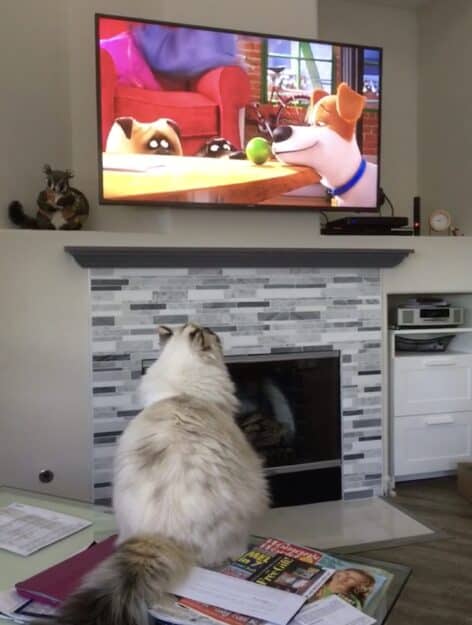 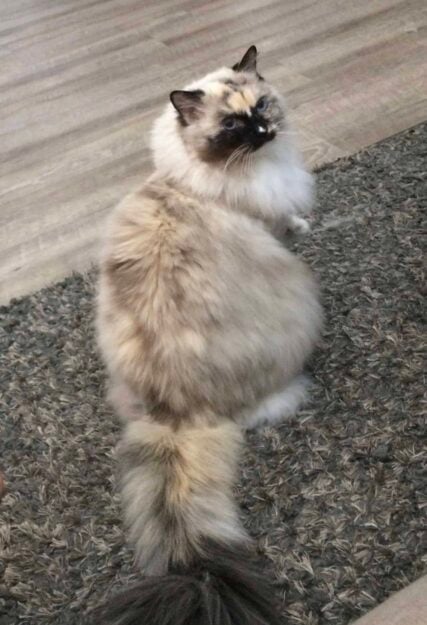 My husband and I are retired and have set down quite a routine, which Skye has happily agreed to. She is food-focused, loudly demanding to be fed at her usual times for breakfast and dinner, treats at 9:00 p.m. (she begs by lifting a paw—hard to resist). Mealtime consists of a third can of Wellness Core wet food, either shrimp/tuna or salmon/tuna (thanks, Chewy.com for auto-ship) and a small amount of Iams Hairball dry mixed with Science Diet Oral Care dry. She loves the bigger chunks of the Science Diet and will beg for more. If we’re not up and at ‘em by 6:30 a.m., she comes into the bedroom and makes her presence known by trying to get the shutters open so she can sit in the window or pinning under the bed or jumping on the railing and meowing. We generally get up because, well, we have no choice.She has other adorable quirks. She rolls on her back, legs splayed and paws drawn up when she wants attention. This is a position I can’t resist and she knows it! When she wants up close and personal, she jumps on my or my husband’s lap, overriding anything we might be doing, and does the kneading thing with pins out on our bodies. After she creates an acceptable amount of blood spots, she settles down, head back and neck exposed for scratching. Her loud purr lets us know she’s in her happy place. Most times when we come through the door after being gone she runs to greet us like a dog and flops down for a rub. She isn’t allowed outside but attempts to sneak out the front door or our patio slider at every opportunity. Our area of Orange County, California, is overrun with coyotes, so it would scare us to death if she got out. 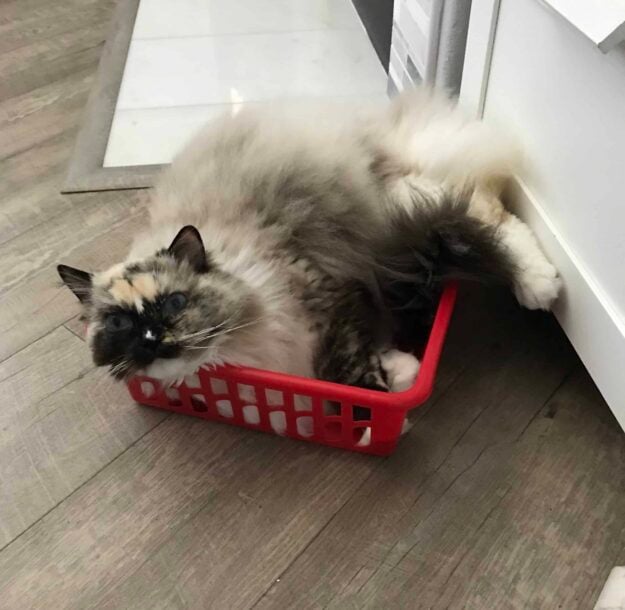 We’ve purchased many toys for Skye, most of which she has ignored after a few swipes of her paw. She has no interest in catnip. She’ll still play with the small goldfish that came home with her as a kitten (sometimes available at Target), and the pipe-cleaner man a granddaughter made. She’ll steal the straws from your drinks and run away with them. But her favorite is the low-priced Pawaboo tunnel I found on Amazon last year. She loves to dive into this tough, nylon, three-armed tunnel and pretend we can’t see her, drag straws inside or bop off a ball we’ve placed on top. We highly recommend this tunnel for its play value and durability. 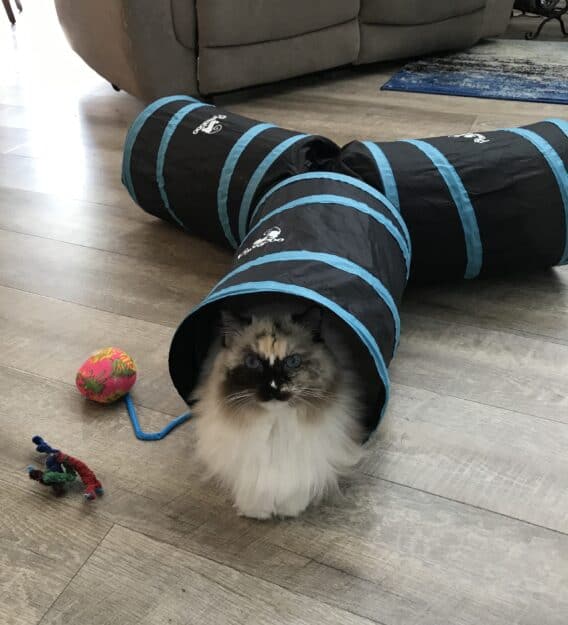 Aside from anywhere she feels like it, she loves to sleep beside the fireplace in a small plastic storage bin from Dollar Tree. She makes herself fit somehow, or not. Another favorite place she likes to crawl into is the kitchen cupboard that holds all my plastic bins. She secretly paws open the door and sneaks in amongst my stuff, rearranging the bins to her liking. There’s no digging her out of there till she’s ready.Skye and her sister Zoey’s birthday is Oct. 25th. I can’t believe our sweet fur ball is five years old. We’ve never had a cat like her that interacts so much with us and has such a unique personality. Sister Zoey’s family calls their cat “the best pet ever.” We totally agree! I recommended Ragdolls and Ruby Ridge Rags to a friend who was looking for a kitty after hers crossed the Rainbow Bridge. She also made the long drive (even longer) to Winchester and is now owned by a gorgeous, spoiled boy named Finn McCoul. I can’t imagine my life without Skye, but when the time comes for that bridge crossing, I’ll definitely be looking at another Ragdoll. Or two. Do you have a Ragdoll Kitten or Cat?  Consider submitting your kitty!  Ragdoll of the Week submission guidelinesRead more Ragdoll of the Week submissions.