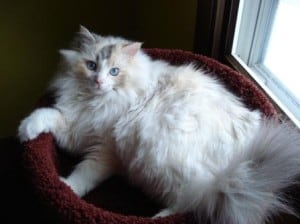 In the fall of 2005 I was looking at Lonerock-Catastrophe Ragdolls website & happened upon a showcat that was for sale.  She was a choc. lynx torbie bicolorgirl, the original breeder was a gal named Debbie who was a friend of Sue Villareal.

Sue's cattery is in Bancroft, Wisconsin.  I had always wanted a girl Ragdoll with "chocolate bangs".  I already had one blue bicolor Ragdoll from Sue, plus a tuxedo male from the Humane Society. 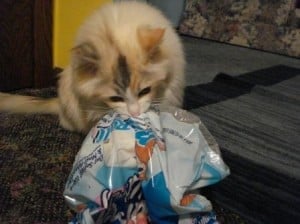 Snuggler was born Sept. 12, 2005 & would be ready to go in December of that year. I was very excited 'cuz she was so beautiful.  After Christmas Snuggler was delivered to me via car.  She was 4 months already & very outgoing & well adjusted. And she loved to EAT! And chew on anything she had her paws on.  She had a knack for knocking pictures & knick-knacks off the wall, tearing up her fuzzy mice & chewing on electrical cords.  In other words, a very mischievious torbie! 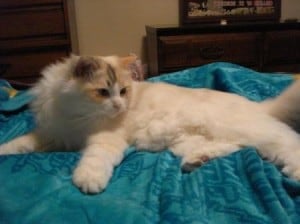 I would buy these mice & glitterballs of different neon colors.  My two other cats, Bongo the tuxedo & Nuzzler the blue bicolor would love to race around & chase them. Snuggler was different.  Besides grabbing them in her mouth & running with them, she would DUNK the glitterballs into her water dish & flatten them out like pancakes! All cats love to hide their toys - I would find smushed glitterballs in every nook & cranny upstairs & downstairs. 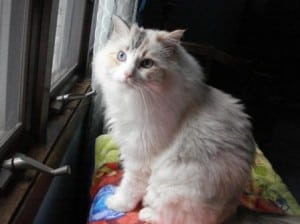 A couple weeks before Thanksgiving in 2006 I noticed my usually bouncy, meowing, romping showgirl was not herself.  She would lay around & barely meow, let alone eat or drink anything, which was very unusual. Snuggler lived to eat, eat, eat.  She would stick her whole head into the cat chow bag before I had the chance to pour in bowl. She had developed a strange habit of making "chomping" motions with her mouth, as if she had something stuck. 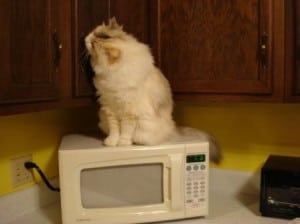 Several vet visits & Xrays later, they found a big blob mass in her stomach.  Sure enough she had managed to swallow NINE glitterballs!! The vet had them removed & put in a plastic bag. After Snuggler's overnite surgery & stitches, they put her on a diet of bland soft cat chow. She would not eat anything but crunchy hard food. 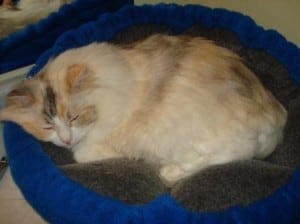 Upon returning home, I glitterball-proofed the whole house.  I guess one cannot ever be too careful when kitten-proofing.  As for toys, I must keep everything hidden & put away. 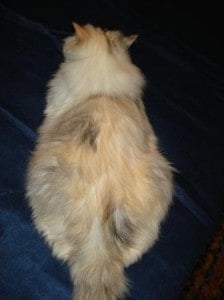 Snuggler is now a little over 5 years old, 15# & about 36"Long.  Her "set-back" with the glitterballs did not deter her growth or appetite.

Her cat-show-circuit was a one-time only thing.  After one show in Maple Grove at 8 months, she got fed-up with being handled & transfered from cage to cage.  By her third ring she was hissing at everyone & couldn't wait to go back home. 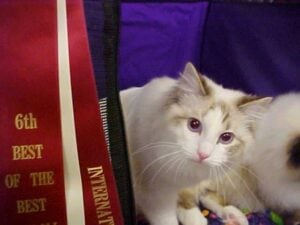