If you’ve ever seen the effect that catnip has on a cat you probably already know just how much our furry little friends love the stuff. But how exactly does catnip work? Is it safe to consume for every cat? And what are the best ways to give it to your cat?

What is Catnip and Why Do Cats React to it? 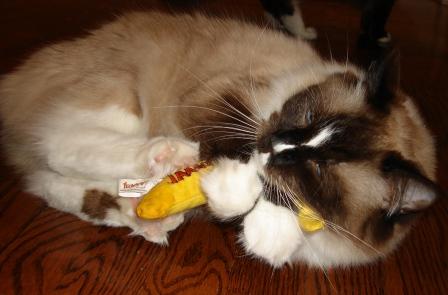 It helps to understand exactly what catnip is. Its scientific name is ‘nepeta cataria’ and it is a species in the mint family of herbs that’s native to parts of Europe, the Middle East, Central Asia and China.

Most felines are naturally attracted to the plant, including larger ones such as leopards and cougars. That’s because catnip contains a compound called nepetalactone, which binds to the feline’s olfactory receptors and induces a rapid feeling of euphoria followed by bouts of relaxation and sleepiness.

The total duration of the effect usually lasts about 10-20 minutes, but felines are known to return to their catnip stashes time and time again if they have access to it.

This brings us to our first point – even though catnip is consistently attractive for many cats, it is not habit-forming or addictive. Cats do not experience withdrawal after being exposed to the substance, and it doesn’t cause harm when ingested.

The attraction towards catnip is hereditary, with most cats only reacting to it after reaching 6-8 weeks of age. After that, it can be a constant companion in their lives, with no restrictions regardless of age or cat breed.

Owners typically use catnip to get their pets to use a scratching post or a bed they previously haven’t shown an interest for. But it works even if you just want to see your cat happy and rolling around for a few minutes. It can be quite a sight for sore eyes, as most cats really love the stuff no matter what form it comes in. 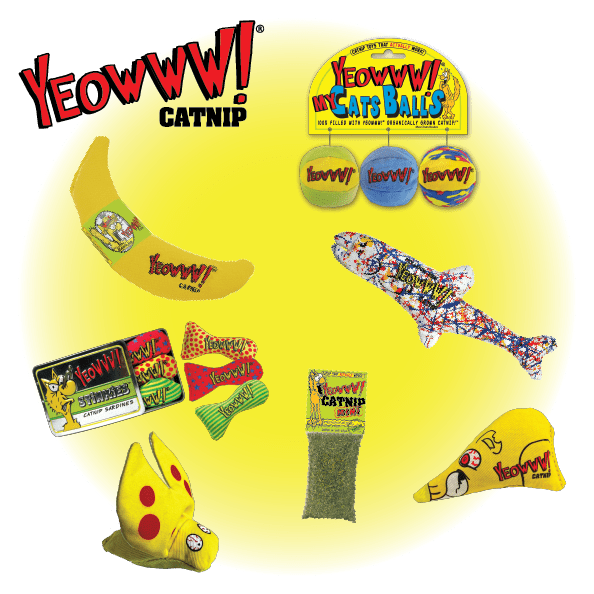 That said, a quality product can make all the difference when it comes to safety. Here’s where Yeowww! Catnip from Duckyworld Products comes in. The company’s line of Yeowww! Organic Catnip Toys are some of the best available on the market today, featuring catnip grown on private farms in the US using organic practices, with no chemical additives or pesticides thrown in. Yeowww! Catnip toys are filled with 100% organic catnip from the flowers and leaves and not the stems!

What’s more, their toys are 100% filled with catnip culled only from the plant’s flowers and leaves (aka the most pungent and attractive parts for a cat), with no extra filler added in just to pad the weight. 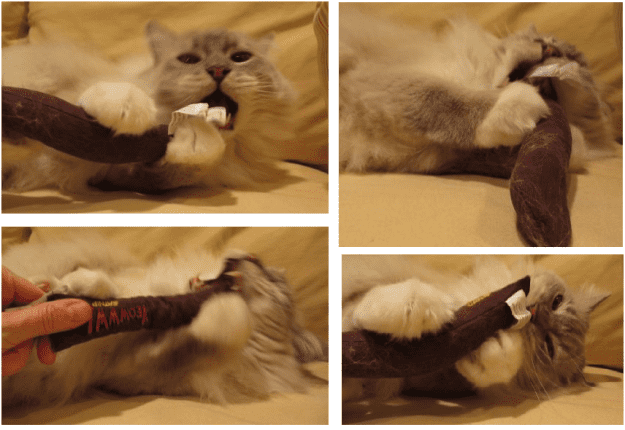 This means you’ll be getting the real deal and won’t have to worry about your cat ingesting something other than catnip during their play. The toy itself is made out of high quality cotton twill, and is built to withstand multiple attacks.

Still, even if your cat were to breach any given toy’s material (they’re going after the catnip inside, after all), nothing bad can happen. As mentioned earlier, catnip is fully edible, and you can always just sew up the toy’s seams again if you want to keep it intact.

Also, it’s important to note that Yeowww! Cat Toys can sometimes turn green after a while because of the reaction between the cat’s saliva and the catnip housed inside them, which upon contact turns into a kind of ‘tea’ that can leave a few stains on the yellow cotton twill. Don’t worry if this happens, the toy is still fully functional and your cat won’t mind one bit. 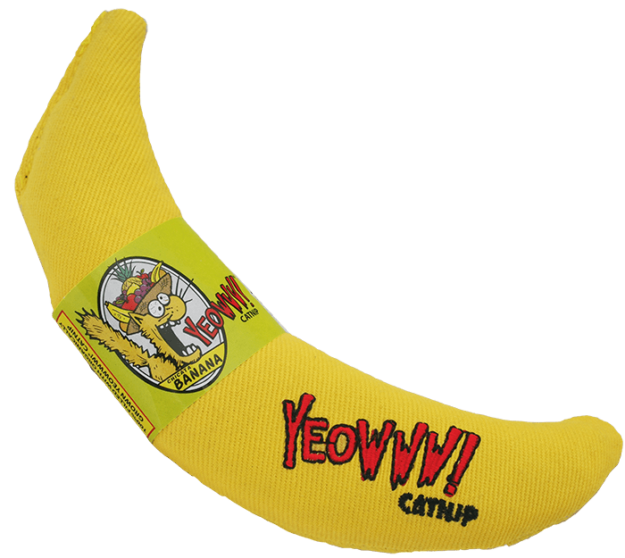 My all-time favorite cat toy is the Yeowww! Cat Banana, which attracts cats with its curvy shape – just perfect for bunny kicks and being gnawed at. Also of note are the Pollock Fish, which is 10 inches long and decorated with colors inspired by the famous painter, and the Butterfly, whose crinkly texture will attract even cats who have previously shown no interest in catnip-containing toys. 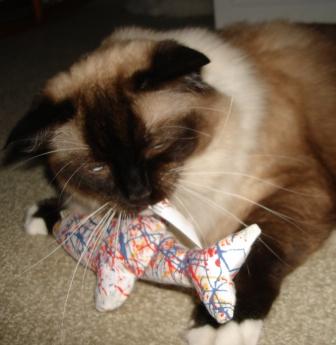 In fact, many people have reported success with Yeowww! Cat Toys after having failed to attract their feline friends with other similar products.  Check out this recent post on Facebook to see what I mean:

All in all, this line of toys from Duckyworld may be your best bet to introduce the joys of catnip to your pet. The numerous products available ensure that you’ll have plenty of options to choose from, thus making Yeowww a no-brainer when it comes to your next cat-pleasing purchase.

Reader Submitted Photos of Their Cats with Yeowww! Catnip Toys 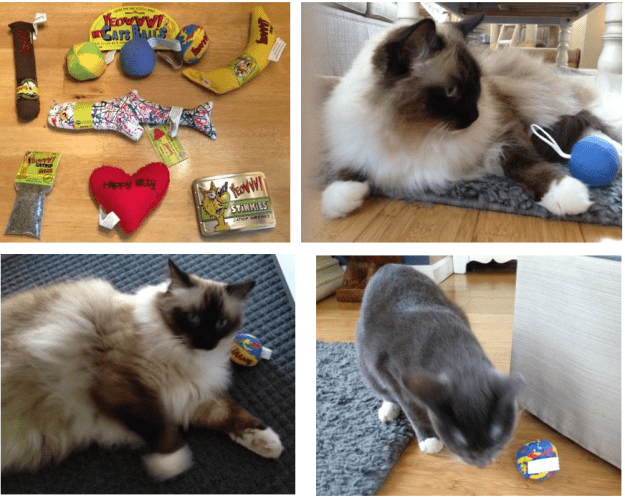 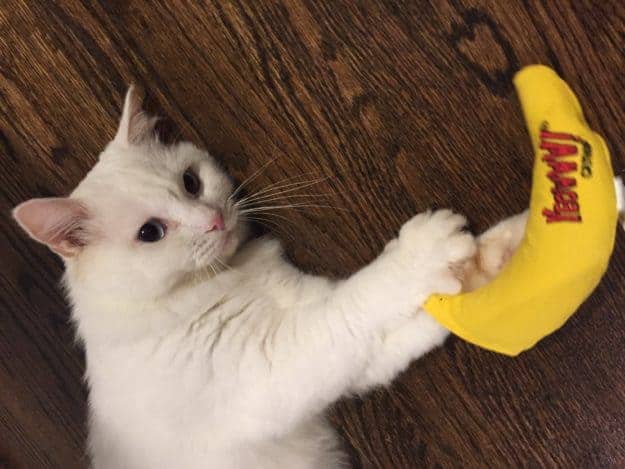 Cuddles with a Yeowww! Catnip Banana 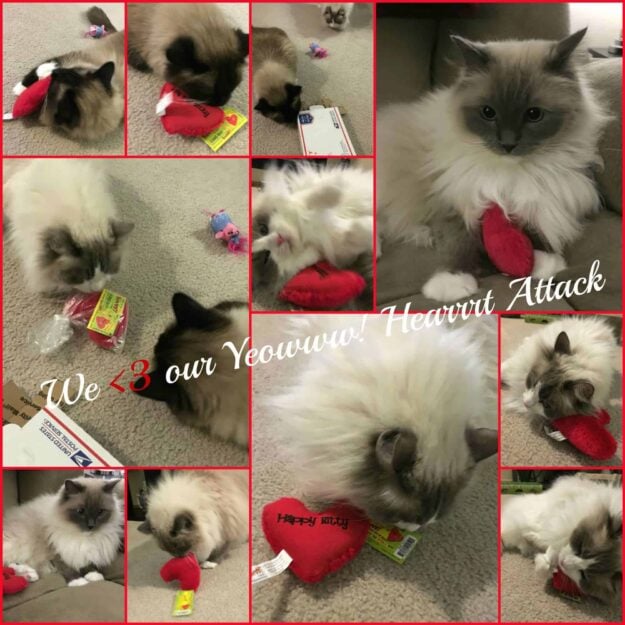 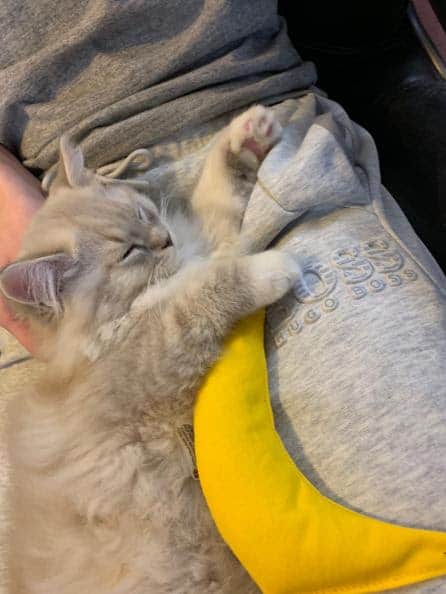 Mochi with the Yeowww! Catnip Banana