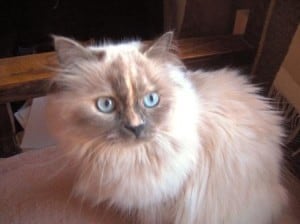 The first face I see each morning is that of Akashi no Kimi.  There she sits on the bed, at a distance of one or two feet from my head, staring at me as if to demand an apology for my lassitude.  Often she will rise, in a stately way, to her haunches and knead on the mattress with a serious air; I call this activity “playing the koto” (koto being the zither-like instrument played by the character Akashi no Kimi in the classic Japanese novel, The Tale of Genji).

Akashi is a three-year-old dilute tortie point Ragdoll with a peach-colored stripe down her forehead and nose and a plumed tail that she carries proudly aloft.  She is altogether a proud creature, who instead of mewing prettily as her appearance would lead one to expect, squawks to announce herself whenever she enters a room—“It is I!”—or steps from her box—“Behold my exquisite litter box skills!”  But she wasn’t always this way.

I first saw Akashi’s picture on the shelter pages of the Purebreds Plus Cat Rescue website.  Purebreds Plus consists of a network of foster homes in Northern California and Western Nevada.  Most cats placed by the rescue are purebred or purebred-appearing  cats placed under care by individuals or by shelters that no longer have room for them, but with cats being dropped at shelters in record numbers, the rescue can absorb many fewer  than it would wish to help.  In certain cases, a cat’s photograph is posted with instructions for contacting the shelter where the cat is located. 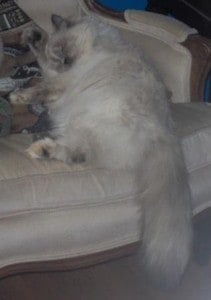 When I went to meet Akashi at the shelter, about an hour from my home, she was sharing an enclosure with three other cats and was obviously depressed.   At first, all I could see was her tail protruding from the carpeted cylinder in which she had ensconced herself.  Eventually she emerged but not to socialize.  Rather, seeing that there were human beings present, she moved quickly to the food dish, turned her back on us, and ate.  She certainly needed the calories: at that time, although already two years old, she weighed only 6 ½ pounds.   The shelter employee who escorted me reached for Akashi and brushed her briefly.  Akashi did not hiss or otherwise resist but looked away and, as soon as the employee released her, slunk quietly back into her cylinder, like a frail, silent wraith.  In fact, in all her time at the shelter, Akashi had made no sound.

I will always wonder what brought Akashi to be abandoned.  This pretty cat, according to the shelter veterinarian, had given birth to kittens and had not yet been spayed when a man walked into the office of a Silicon Valley veterinarian, put down a carrier, and ran away.  Perhaps the man hoped that the veterinarian would try to place the cat himself, with one of his clients, rather than subject her to shelter conditions and a possible premature end of life.  But the veterinarian had done what, it seems, the man could not.  I have no more information than this about her past.

Whatever oath of silence Akashi had sworn to herself while in the shelter was broken as soon as she found herself in a car on the way home, and whatever reticence she had was gone as soon as my daughter and I opened the cardboard carrier in the safety of my bedroom.  “Squawk!!!” declared Akashi, “It’s about time.”  And again she ate, and again.  Over the next four months, Akashi gained weight rapidly, almost a pound a month until her weight stabilized at about ten pounds, which is what she weighs now.  Her coat thickened, and the tortie coloration began to develop on her body, which on the day I adopted her had been a uniform ivory color.  And little by little, she began to let to let us stroke her without walking immediately away.   My daughter, who was home for the summer when Akashi arrived, was startled, when she came home again for her Thanksgiving visit, to see Akashi so much rounder and fluffier:  “There’s so much of her now.  She looks as if she ate her former self!”

Akashi is still an energetic girl at three years old.  She relaxes for most of the day, either on a favorite chair or in “flop position” on the bed or rug--but in the early morning, the evening, and sometimes during the night, she races around the house chasing either a toy, if I roll one for her, or a phantom mouse.  Often she’ll hop into the bath tub or a laundry hamper, look at up at me wide-eyed, then come popping up like a little Jack-in-the-box.  She adores her “Ultimate Cat Scratcher,” both as a scratching post and as a pedestal, which she mounts to remind me of her preferred status in the household.

Akashi is still very shy with guests.   If a stranger walks into a room where she is, she doesn’t exactly run but rather eases herself off the chair and floats toward the bedroom, silent and purposeful as a cloud before the wind.   I am delighted to introduce her to you in a different way.

Want more Ragdolls Cats? Enter your email address to get Floppycats.com’s updates plus you’ll be eligible to win our monthly giveaway.

Do you have a Ragdoll cat?  Want him or her to be featured as Ragdoll of the Week?  Please feel free to share your kitty with us by contacting us.