A somewhat trendy phrase these days is “Crazy Cat Lady”.  A few years back, a reputable cat manufacturer hired an advertising agency to help them promote their brand.  They sent a “gift box” of items to cat bloggers and everything had “Crazy Cat Lady” on it.  It made me mad, angry, really.  As a result, I chose not to participate in the campaign.  It was hard for me to even donate what they had sent me, as I preferred to destroy it.  That’s how much I dislike the term. I was recently approached by an apparel company – they wanted me to introduce their brand to Floppycats readers.  I visited their site and saw that they had a hat, “Crazy Cat Lady”.  And it made me think that I should probably write this post. In college, I took a lot of racism and feminism courses as part of my studies – which helped me look at many things we overlook in our daily lives.  The popularity of something like – “Crazy Cat Lady” – can become so widely used that we don’t even realize what we’re perpetuating when we say it or use it. So, why do I dislike it?  Well, let’s break it down.  Crazy, as defined by a quick Google search – has two  definitions. cra·zy ˈkrāzē/ informal adjective 1.mentally deranged, especially as manifested in a wild or aggressive way. “Stella went crazy and assaulted a visitor” synonyms: mad, insane, out of one’s mind, deranged, demented, not in one’s right mind, crazed, lunatic, non compos mentis, unhinged, mad as a hatter, mad as a March hare; 2.extremely enthusiastic. “I’m crazy about Cindy” synonyms: passionate about, (very) keen on, enamored of, infatuated with, smitten with, devoted to; My guess is most people think of it as “extremely enthusiastic”.  What I don’t like is the first definition possibility.  After all, as the example in the second definition suggests – as an adjective, it needs to be followed by the preposition “about” in order for it to refer to the “extremely enthusiastic” definition.  “Crazy About Cats Lady” would mean more of the #2 definition.  When it is used as “Crazy Cat Lady” I interpret it as the #1 definition. I also dislike how it refers only to women, leaving out men who like cats or who are enthusiastic about cats. I also ALWAYS see this toy figurine in my head that came out years ago when I hear the phrase: 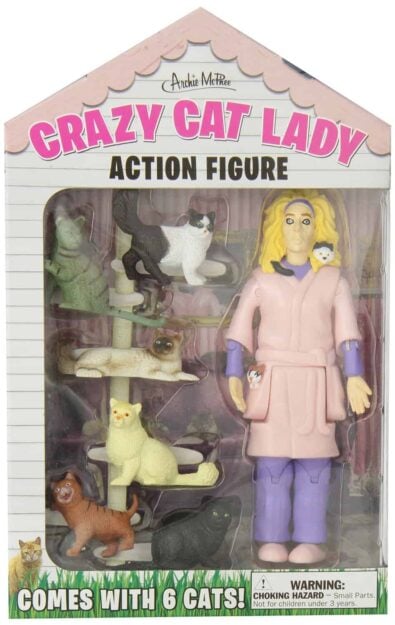 The Urban dictionary defines “Crazy Cat Lady” as I also feel it is just derogatory towards women in general.  For this reason and more, you will not see me supporting the term or phrase on Floppycats. What’s your take or feeling about the phrase, “Crazy Cat Lady”?

27 thoughts on “Why I Dislike the Phrase, “Crazy Cat Lady””