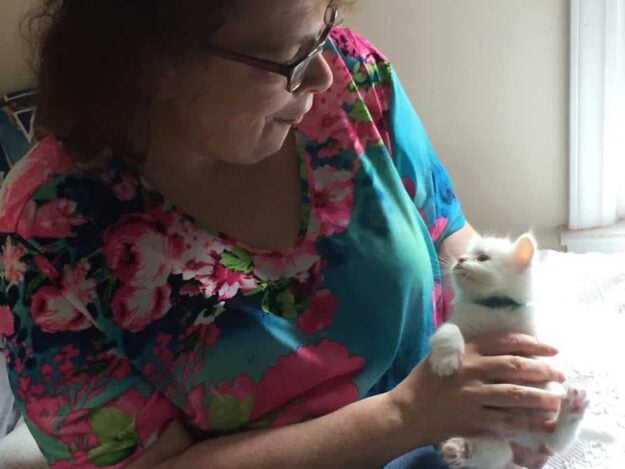 How to describe him? Mr Debonnaire, the cool cat himself! Misha is a three year old creme lynx point Ragdoll, one of my pride of 4 cats, but he's the only one with a distinguished pedigree! Misha is not my first Ragdoll! I learned about Ragdolls in the mid 80's and two years later had my own breeding pair, but this, too is a long story , that I may get into some day when I talk about my Rainbow Ragdoll, Hershey, who passed away in 2012. Ragdolls have been in my life since I was a teen, but the 10 years I had to live without one were very tough, I missed having one so much, and then Hershey entered my life. Anyway, I'm rambling! Misha was Floppycat kitten of the month in 2017, so I decided it's time for an update. 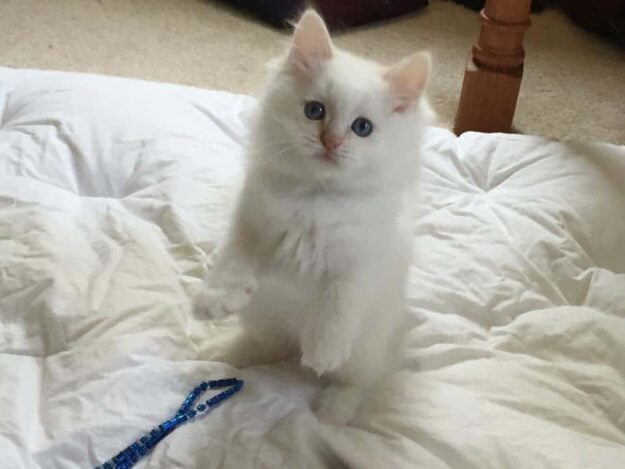 His "Gotcha Day" was July 17, 2016, the day after my son turned 11 . Misha was hand picked for me by my best friend. who breeds Ragdolls . I introduced her to this beautiful breed, but that's yet another whole story. She chose him for me, for his mellow, happy-go-lucky attitude, as he had to be strong enough in character to stand up to my Persian Mix Winston, who has a very strong alpha personality. And he has done just that! He's not a lap cat, but he sleeps with us almost every night. He's confident, relaxed, patient, yet also has a mischievous side to him. I feed all my cats separately, and Misha is spoiled enough to get fed on demand. When he is hungry and I'm working on my computer, he jumps on the desk, tilts his head at me and touches me with his paw! This is usually accompanied by a pitiful little "Meow?" He's self assured and relaxed and he has never once, in the three years he's been here, hissed or growled at me. Now big "brother" Winston, on the other hand... 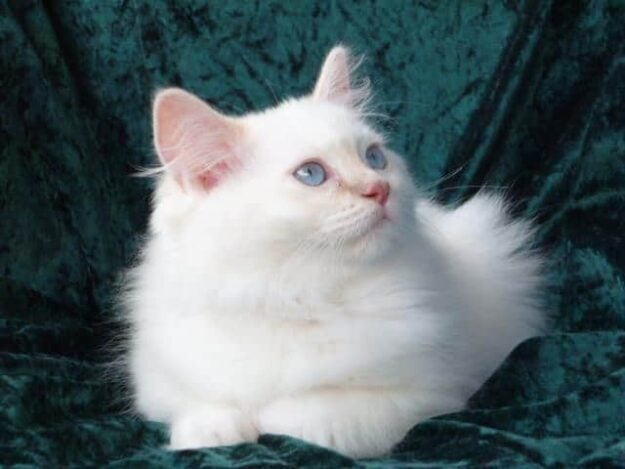 It was my friend's and my intention to possibly show Misha, so for his pedigree , I named him after one of my favorite movie characters. His actual name is "Ritterkatz Cptn. Navarre"! However, I over-estimated myself and I'm no longer as spry and flexible as I was in my youth, when I had my first Ragdolls (and yes I did show one of them several times). Very quickly, I found out how much Misha detested baths! As little as he was at 4 months, he would spread-eagle himself over the kitchen sink, all arms and legs, and howl so loud that I was worried the neighbors in the next house over thought I'm murdering my cat! So, for his emotional well-being, as well as for mine, I decided a show career was not in the stars for Misha. It's ok. In my eyes, he's purrfect ! 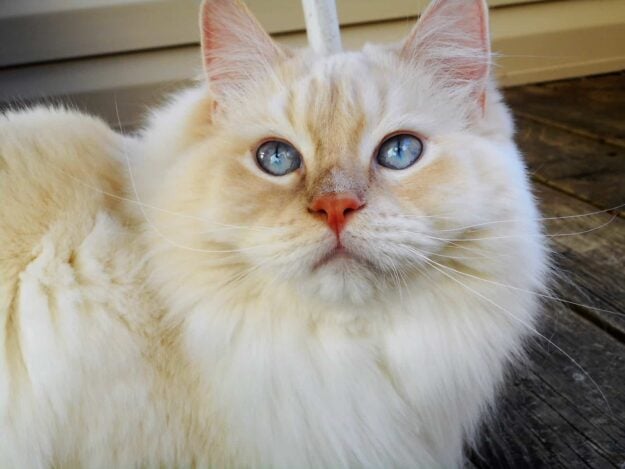 Misha spends his days lounging around, hiding under/behind the shower curtain pretending to be invisible, or playing a quick game of tag with Winston, or with his Domestic Shorthair sisters, Scooter and Selah. He gets to go out on our balcony, under my watchful eye. He also likes to chase the occasional fly that gets inside. Taking pictures can be quite a challenge, he does not like to be disturbed! He makes friends with visitors quickly, and graciously accepts the attention of everyone he meets. 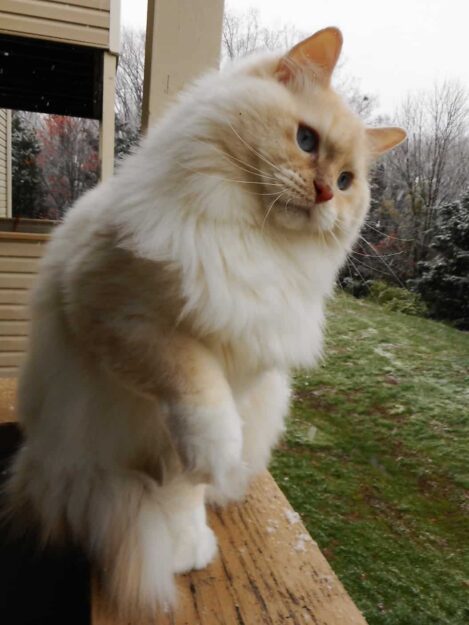 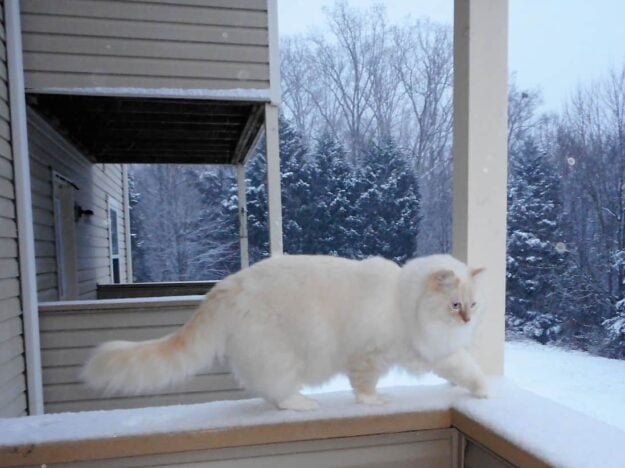 At night time, he and my husband have developed a funny little routine. When it's time for bed, and Misha notices, he will make a mad dash to the cat tree which is next to the bathroom door in our bedroom. Misha lies in his perch, paws hanging out, just waiting for my husband to pass by, so that he can bop him on the head! My husband has just the right height! 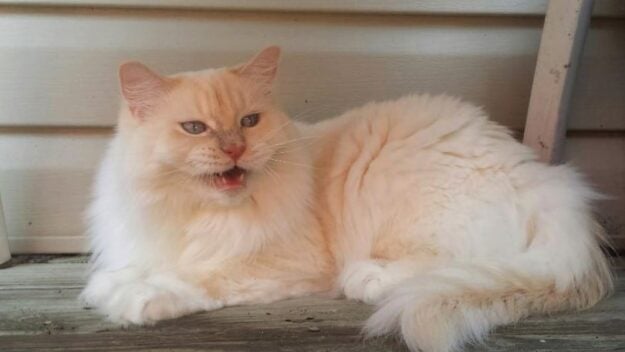 Misha is convinced that our bed is his. Well, at least, hubby's side is! He sleeps at his feet, and if Misha thinks he gets crowded in, he will push and even nibble at those feet until they move out of the way. Yes, this fluffball has trained my 6'4 husband very well! He knows however, that I'm "Mom" and he treats me with a bit more respect - or so I tell myself. Oh, what do I hear? His Lordship at his feeding station, and he's starving! Gotta run and serve King Misha his dinner! 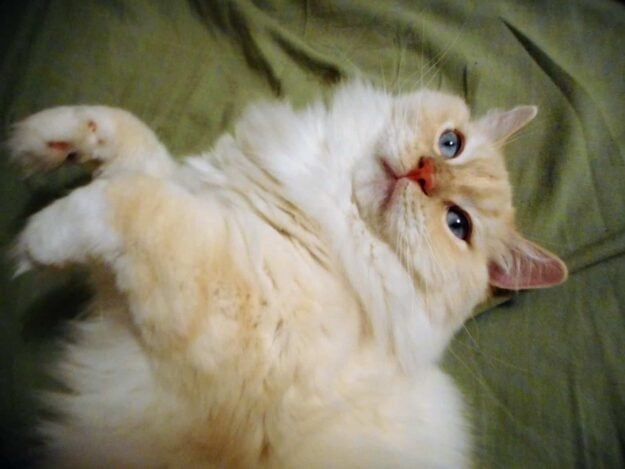