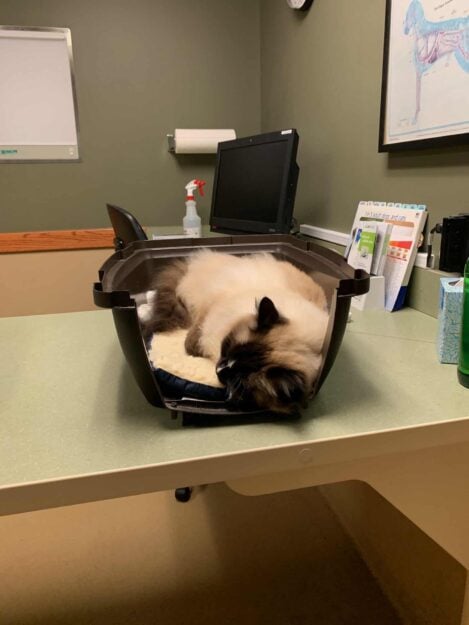 Over a month ago, I had an unexpected trip to the emergency vet,  Mission Veterinary Emergency & Specialty, with Charlie, my 10-year old seal mitted with a blaze Ragdoll cat.

I had come home after the 2.5 hour drive back from my parents’ lake house.  Charlie and Trigg are always in their carriers in the back of my car for that trip.  They both meow the entire time and usually have saliva on their manes when they get out.  However, this time was way worse – but I didn’t know it was worse until later.

Came home, gave Charlie and Trigg their treats – Charlie ate them, so I didn’t think much of it.  I proceeded to empty my car and put things away.  That’s when I noticed Charlie was sitting in my papasan chair (which he only does in winter time) – and I went up to him and said, “What are you doing?”  And then noticed that he had vomited twice (saliva-only vomit – a sign of nausea) on the chair and kept licking his lips (another sign of nausea).

He was nauseated. Charlie was foaming at mouth (like my sister’s Ragdoll cat Addie was before her disease was discovered) and wouldn’t stop swallowing.

I watched him for 5 more minutes, and then decided in my gut (I make a lot of decisions based on my gut) that I was going to take him to the emergency vet – it was Sunday night.

I texted my mom and Amy to let them know that I was at the emergency vet – and Amy met me there. 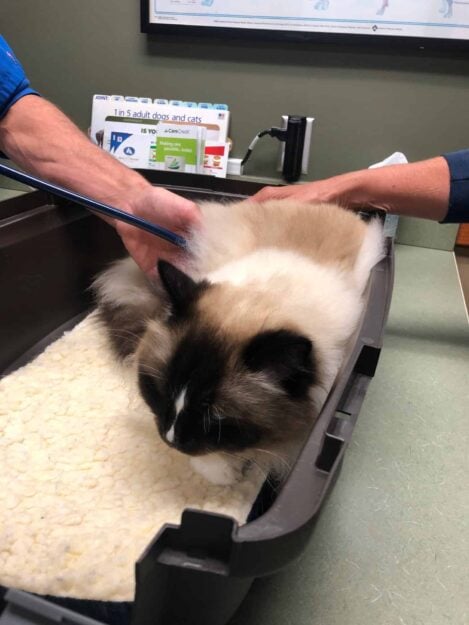 The vet tech took his vitals and his temperature – and then left the room saying the doctor would be in.

Charlie in the mean time was laying down in his open carrier – VERY ODD. 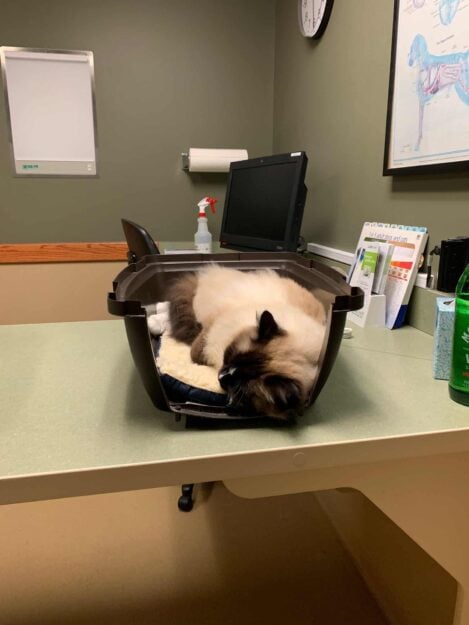 Charlie is not the type of cat to settle down at the vet – and definitely not in a open carrier on the countertop – he is usually pacing the perimeter of the room or settles on the floor where he wants to settle.  So, I was very concerned given his behavior.

Amy and I started talking, while we waited for the vet to come in, and Charlie let out a HUGE BELCH – like a human would.  I’ve never heard a cat burp, let alone belch.  Retrospectively, we determined that he must have swallowed a great deal of air from all of his meowing.

The vet came in and did her routine check.  She said, “We could get blood work and x-rays – but honestly, I’m not sure it’s necessary.”  And then she started to push on his abdomen and felt “something hard” – so she suggested we do an x-ray.  I said, “If you’re going to go ahead and do an x-ray, please do blood work because they were not able to get blood from him on his last vet visit.”  And since Charlie is now considered a senior cat, it’s important to get routine bloodwork to make sure all is ok.

Those 30 minutes waiting for the x-ray and the bloodwork killed me with worry.

Yet, his blood work came back “beautiful”. Can’t remember how the vet said it, but couldn’t have been better.  I told her that he had just celebrated his 10th birthday the day before and she said, “I know, I saw that on his chart and did a double take that he was 10 – this does not look like the bloodwork of a 10-year old cat.”  However, the x-rays showed possible mineral deposits in his gall bladder. She suggested fasting overnight with fluids and an ultrasound the next day to rule any gall bladder issues out. If I didn’t leave him overnight and decided to do fasting on my own, I’d have to wait 2-3 weeks for the ultrasound (emergency room patients have priority with ultrasounds).

He was meowing so much in the back that the techs asked, “Isn’t he a Ragdoll?” He definitely became himself when they brought him back up to us before we left. He was meowing, pacing the perimeter, lying on the floor, not in his cage. He was feeling better and more himself. I don’t think it was necessary to leave him, but Amy encouraged me to leave him so I could just know what the deal was with the gall bladder and not wait 2-3 weeks to have all that done. I felt pretty guilty about leaving him there, but then thought he’d be pretty entertained there. He wouldn’t have liked being confined. But he’d be entertained with all the activity they have there – Charlie likes good action that he can observe. 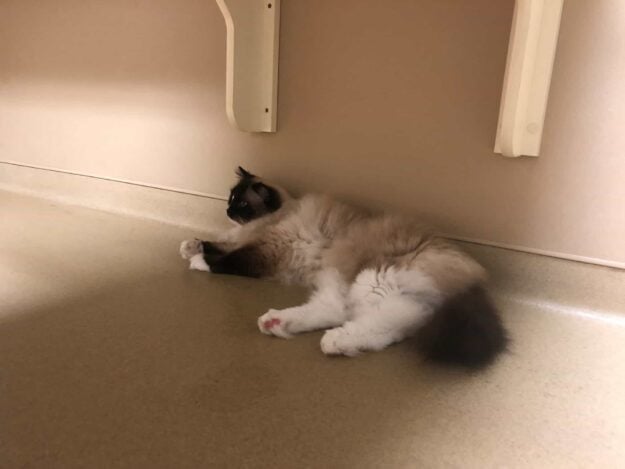 Even when I would call to check on him later that night and the next day, I could hear him meowing in the background – he hates being confined.

The ultrasound didn’t happen until the next afternoon.  I was dying for that to be done – so I could take Charlie home.  I hated him being gone – Chiggy did too.

When they called that afternoon, everything looked good on ultrasound – gall bladder, etc. The only thing that they said *could* be something was a SLIGHT thickness to small intestine which he said could be IBD or could be a result from his upset. We haven’t had any problems since…and they suggested we just proceed with normal life unless he showed signs of nausea (or anything else) again.

Ever since my sister’s cat, Addie, was diagnosed with Feline Gastrointestinal Eosinophilic Sclerosing Fibroplasia – after a $10,000 emergency surgery and stay, I have had cat health insurance for Charlie and Trigg through Nationwide.  I have to tell you, having health insurance for them has been a godsend for me when deciding whether or not to proceed with suggested things like x-rays, bloodwork, ultrasounds, etc.  You can see our bill below and more explanation about that below.  But just wanted to mention that it makes the decision process pretty easy.  I also just read a Facebook post about the high suicide rate among veterinarians – they are expected to know what is the matter with their patient, who cannot talk and without being able to do the diagnostic tests they need to do to determine the problem (because many owners cannot afford or do not want to spend money on those tests) – so I liked that I could do everything the vet recommended.

I did a live video on Facebook the next day to tell everyone about it – it is rare when something is going on with my cats that I share it before I know the end result.  I used to share that info live on our social media, however, I found I can get a lot of suggestions that make my anxiety even higher, so I no longer do that.

Interestingly enough on that live video, Theresa said, “Anxiety can cause esophageal spasms. And if the esophagus tightens up, it can trap gas causing significant discomfort. I bet that big belch felt fantastic!” 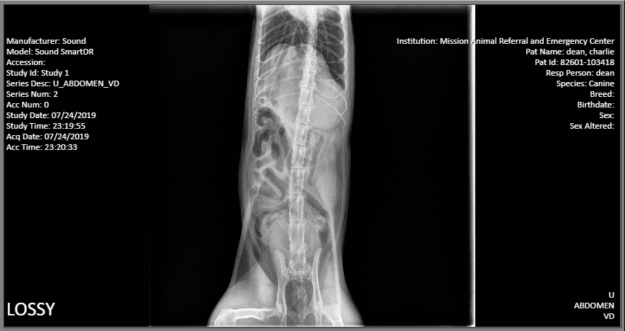 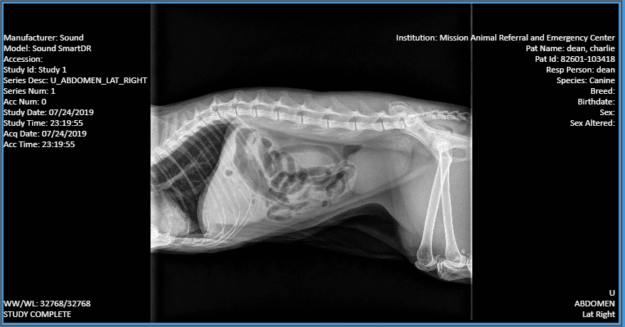 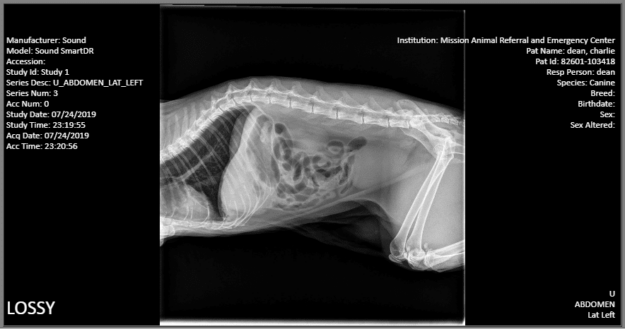 As you can see, after everything was said and done, it cost $1,356.50.  I have pet health insurance through Nationwide.  They reimburse 90%.  I have not yet met our deductible this year – which is $100.  So I ended up paying $235.65 for this – which is about what the bloodwork alone would cost me at my regular vet. 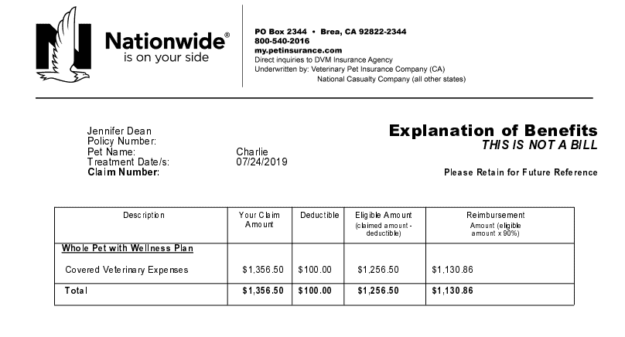 Only a few weeks later, I had another trip to the lake planned, so I asked on Facebook about it given the ordeal from the first trip back:

Hi All – I’m about to head down to the lake with Charlie again.

As many of you know, Charlie gets “sick” in the car and this last trip back was the worst ever. I have a sedan and Charlie and Trigg are both put in their carriers after they have been fed and we usually leave around their afternoon nap (so I hope they will sleep). The way down was the best trip yet, however, the way back was awful.

Charlie meows the entire time. And he produces so much saliva that his mane is wet by the time we get where we are going.

When we got home this time, he had a wet mane, foam at his mouth, kept vomiting nothing and also kept swallowing.

I took him to the Emergency Vet and after x-rays, bloodwork and an ultrasound, it was determined that he had inhaled too much air. Don’t want to repeat that. Wondered if you had suggestions for a less exciting car ride?

I think his nausea comes from the constant meowing and anxiety of being confined in a carrier rather than actual motion sickness. I have debated letting him roam the car, which is not safe – but on the other hand, neither is leaving him in the carrier as is.

I know Gabapentin might be an option – I don’t see that as an anxiety blocker for him – more of a nerve blocker. He still has anxiety on it.

I’ve heard Cerenia is an option but would that help if the nausea isn’t caused by motion sickness?

I have some hemp pills I could try too.

Our trip back to the lake was pretty uneventful.  He was put on a dose of Cerenia – and still meowed and had saliva on this mane – but this time Trigg and Charlie both stopped meowing long enough that I wondered if they were ALIVE in the backseat!

I snapped these photos of Charlie after we got back down to the lake –  so he was on Cerenia here: 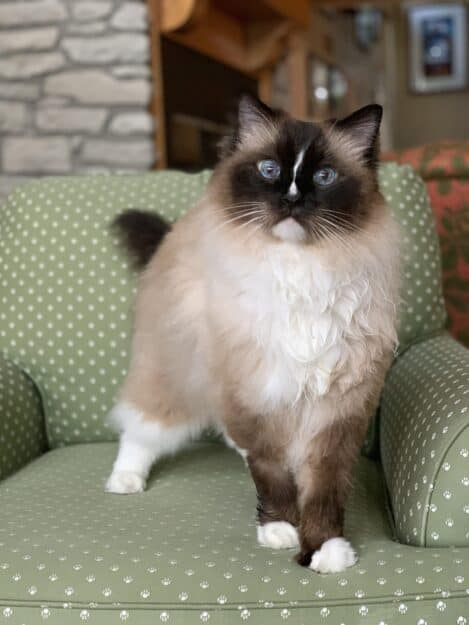 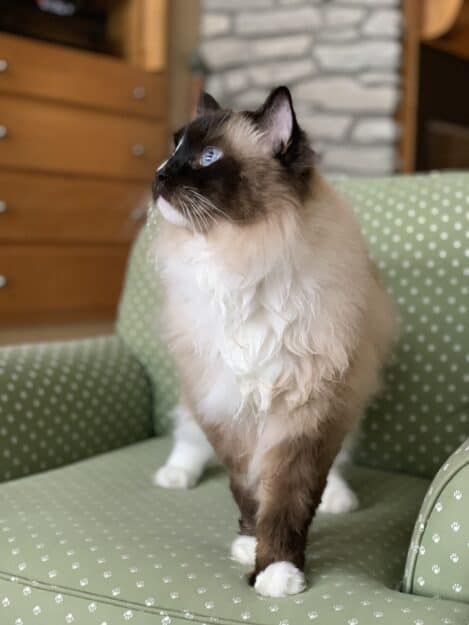