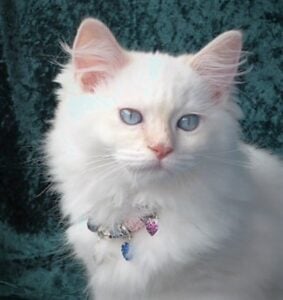 I first became interested in Ragdolls in the mid-1980s, when I saw a picture and an article in a German pet magazine. I was fascinated! Two years later, I came to live in the United States. I got my first Ragdoll shortly thereafter in 1987. This was at a time when Ragdolls came just in four colors: Seal, blue, chocolate, and “frost”. Well, fast-forward a couple decades and some life changes later, I got the opportunity to help my friend establish a Ragdoll cattery. My unique perspective on having watched the Ragdoll breed develop for nearly 30 years, and our sharing the same heritage and culture, brought about this venture into the cat fancy. 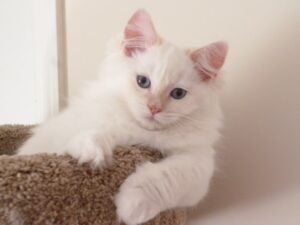 I waited several years for just the right time and opportunity, and I adopted my cream mitted kitten Misha from Ritterkatz Ragdolls. Yes, I highly recommend them. The cats and kittens are well cared for and socialized, and never caged. They also have an early spay/neuter policy and pet kittens get “fixed” before leaving the cattery. I have the pleasure and privilege to visit kittens from an early age, and I’ve witnessed 2 queens give birth! But back to Misha . His name is the nick name of the Russian “Mikhail”. For his pedigree name, I picked “Ritterkatz Cptn. Navarre”, as “Ritter” is the German word for knight, and Cptn. Navarre was the hero in my favorite movie, “Ladyhawke”.

Misha is now almost 5 months old; his birthday was April 24, 2016. He is very, very playful, assertive and not at all afraid of my other resident cats. He 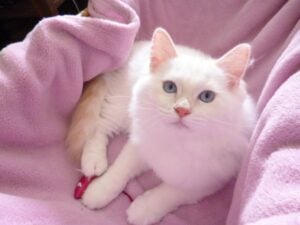 constantly purrs. He hates baths, so I’m considering giving him “baths” with a waterless shampoo from now on. In the future, I might enter Misha in a couple of cat shows, and see how far I can take him, if he likes it. For this reason, he will not be neutered until he is about 8-9 months old, sooner should he start marking. Misha has also captured the hearts of my 11 year old son and my husband. I had to put a thick, sherpa – lined blanket over the foot board of our bed, as little Misha right away got into the habit of fearlessly leaping down almost 6 feet from the top of the cat tree to our bed resulting in a loud “thud” as he was hitten the wooden foot end. Hoping I can find a Superman cape for him for Halloween. 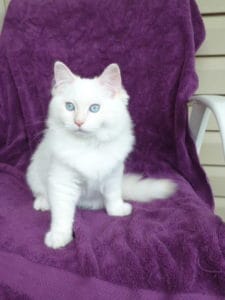 Currently, Misha still eats Royal Canin Mother- and Baby Kat dry food, and he gets 2 servings of raw ground chicken, as well. When he is older, I will switch him to 4 Health Grainfree Indoor Formula cat food, which is what my other cats are currently eating. I do supplement my cat’s diet with raw food on a weekly basis. Eventually, I will switch to raw completely, as this is what’s best for cats. I am researching nearby vendors for quality raw food at the moment. Misha is allowed out on the balcony under my supervision, and considering his young age, very patient when I take pictures. I am totally smitten with my kitten; I had to wait so long for the right time. Petting his luxuriously soft coat and looking into those captivating blue eyes, he’s got me completely wrapped around his paws! 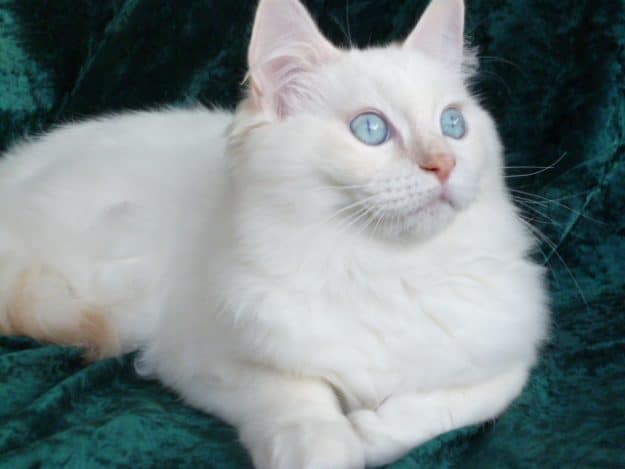 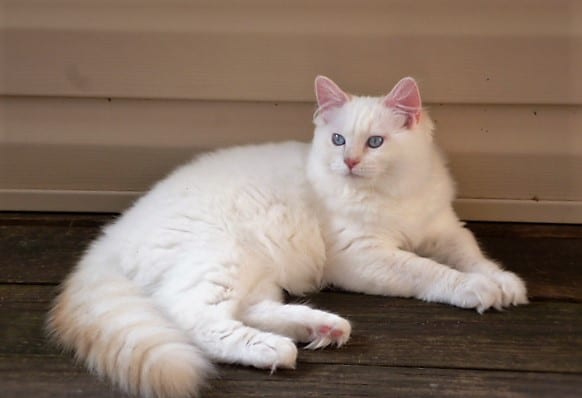 9 thoughts on “Misha – Ragdoll Kitten of the Month”