How on Earth is my Charlie-man 7 years old today?  I just can't believe it. 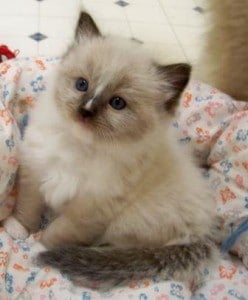 Charlie as a Ragdoll Kitten

Ever since I was a little girl, I wanted a seal mitted Ragdoll cat with a blaze (because the first Ragdoll cat I ever knew was that color pattern).  I also wanted one with a perfect hourglass blaze.  So when I saw Charlie's little face staring back at me on his breeder's website, I knew in my gut he was mine (see kitten photo to the right - that was the one I saw).

Many of you have gotten to know Charlie over the years through our cat YouTube videos and also our postings here on the site and on our social media channels.  Charlie is a very outgoing Ragdoll cat.  My family has a hypothesis that blaze cats are always outgoing - but Charlie takes it to a new level with his willingness to participate.  He truly fits the Ragdoll cat stereotype of being a "puppy cat".  He usually always with me - or within hearing distance.  He was a gift to me from the universe for this website for sure - he looks at the camera when I ask him to, he usually comes running when I ask him to, and it seems like he is aware of his "job" as a Floppycats.com cat (wittle Chiggy, not so much).

I am one who believes that we are gifted with certain souls in our life to help us grow and change.  Given the last 7 years, I know Charlie and I were supposed to spend time together in this life.  He gets me, and I get him - and we butt heads too.  But our soul connection is alive, and I can easily communicate with him through my eyes alone.  (Eyes being the windows to the soul - hence the soul connection).   I am VERY grateful to Charlie for the eye communication.  I was able to do the same with Rags, and always feared I wouldn't have that again with another cat.  But Charlie has proven that I can have it with another cat, and I thank him for that.

As a general confession, I am sometimes scared of "regular" cats.  I find them unpredictable and sometimes am scared to touch them.  Charlie is NOT your normal Ragdoll.  What comes to mind to explain this, is a situation I had a year or two ago.  I was getting my home refinanced, and the appraiser was at my house asking me questions as he finished some paperwork.  Charlie, of course, was present as well.  The appraiser was sitting on my couch, meanwhile Charlie was sitting on their cat scratch tower where he could be higher than the appraiser dude, but also right next to him.  The appraiser guy, without turning around to look at how/where he was touching Charlie, was just putting his hand up to say hello - meanwhile, Charlie had his paw up ready to strike the guy if he touched Charlie's mane just one more time.  I sat there paralyzed in fear that Charlie would follow-through.  Thank god he never did, as maybe my appraisal would have come in less than it did.  But that's Charlie - most Ragdolls that I know would walk away or jump down from the tower - but Charlie is more like, "Oh yeah, buddy?  I dare you to try that move just one more time!" 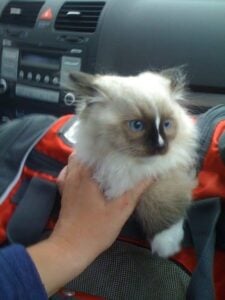 I believe the feisty-ness of Charlie's personality has to do with the hair follicles he has (see kitten photo on the left that shows that general feisty-ness).  I wrote a post about this earlier - Ragdoll Cat Cat Hair Coat Type - explaining that he feels and senses things more sensitively than Trigg and other Ragdoll coats because of the coat he has.  I used to think he was neurotic because of how he reacts to wind, water, etc. compared to other Ragdoll cats I have known.  However, I discovered in his 6th year of life that he's not neurotic, he's just way more sensitive because of how his hair grows.

He is an incredibly sweet cat and welcomes humans greeting him with sweetness.  However, there is something about his energy, and his face that makes humans want to mess with him.  In other words, he doesn't seem to present himself as a sweet, love-able cat - rather he presents himself like he is game for anything.

There is a not a person that meets Charlie in person that doesn't smile when they see him.  He brings an instant smile to my dad's face - and my dad is the only person I really text Charlie photos to.  My dad had instantly and has always had a tremendous amount of affectionate joy for Charlie.  That is something that endears me to Charlie as well.  My dad is not a cat person voluntarily, so for Charlie to have that innate ability over my dad is pretty cool and fascinating.

Charlie likes to walk around the yard meowing for no reason.  Sometimes that drives me mad because he's like the neighborhood dogs that don't stop barking.  However, while it drives me mad, it is also quite curious - wonder what he is saying and who he is talking to.

His personality and his looks have inspired many humans to find a seal mitted Ragdoll cat with a blaze.  I have also received countless e-mails from people stating something along the lines of, "Charlie is the reason I decided to get a Ragdoll!"

Happy Birthday to one of the most beautiful, energetic souls I have ever had the pleasure of sharing a home with.  Thank you all for being here and loving him like you do!