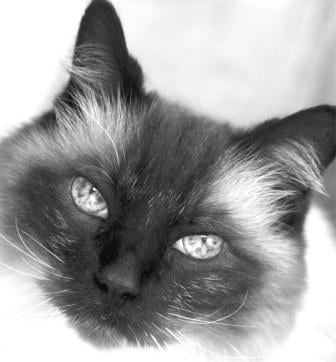 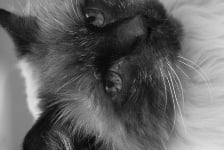 Meet my Rags.  You might recognize his photo from our social media channels - I use that black and white photo of him as our profile photo on our Facebook, Pinterest, Twitter, Instagram and YouTube.  There is good reason for that - Rags is the reason this website exists.  He came into my life when I was 10 years old, and he passed in 2009 when I was 29 years old.   The 19.5 years that I spent with him inspired the creation of this site.  He was my best friend growing up and knew all of my secrets - he taught me about soulmate connections, life and love. I hope you enjoy reading about one of the great loves of my life.

My parents gifted my siblings and me Rags and his half brother, Cosby as kittens in 1989 as a surprise Christmas present (see photo - I (blonde girl) am holding Rags).  Rags and Cosby were seal mitted Ragdoll cats.  Cosby had a white chin and Rags had a dark chin.  As far as show standards are concerned, seal mitted Ragdolls are supposed to have white chins.  Whenever I showed breeders a photo of my Rags, they always thought he was a seal point, if they couldn't see his paws.  Because of his dark chin he was also often mistaken for a Siamese or a Birman cat.  It is because of his "mis-marked" dark chin that I immediately fall in love with a seal mitted Ragdoll with a dark chin. 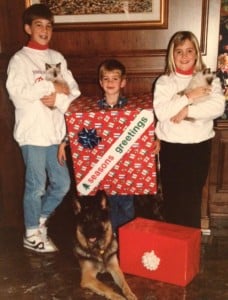 I am holding Rags. My older brother, Marsh, is holding Cosby and Snickers is the GSD.

Rags and his half brother, Cosby, were "replacements" for my very first Ragdoll, Hoosier Dolls Ragdoll Cat Skittles, who died at 2 years of age from FIP (Feline Infectious Peritonitis).  Unfortunately, Cosby died at 10 months old of FIP. The vet told us then that Rags had probably been exposed to the disease and would never be affected by it since he hadn't technically "caught it". Thank goodness!

So, we ended up losing both Cosby and Skittles from FIP - less than 2 years apart from one another.

Rags and Cosby both came from Ragnarok Cattery in Mira Loma, CA. When we adopted Cosby and Rags, they were unable to tell us which kitten was from which mother, but they did have the same father, Ragnarok's Thor.

Here are the pedigrees that we received for Cosby and Rags: There are few photos of Rags and Cosby together due to Cosby's short life.  In the photo below, Rags is the background and Cosby in the foreground. 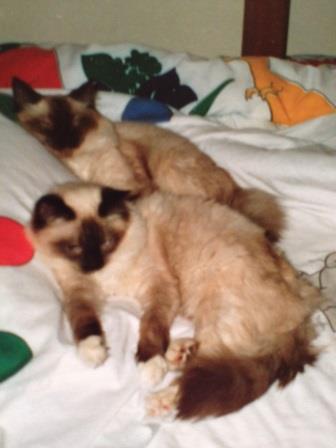 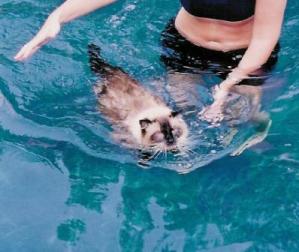 Since I was 10 years old when we got Rags, it probably comes as no surprise that I entertained him and myself by dressing him in Cabbage Patch clothes, putting him in the pool, strolling him around in baby carriages, bringing him with me on the jetskis, etc.  I lugged him around everywhere and that's probably why he was so mellow in public (we went to Petsmart or Petco on occasion when he was feeling well up until about 1 month before he passed) all the time. Well, he did have that fabulous Ragdoll personality that allowed for him to be more docile than other cats in general.

I rarely called him, "Rags", unless talking about him - if I was addressing him, I would call him various names - including, but not limited to: Naggle, Freegie, Poo, Raggle Raggle. 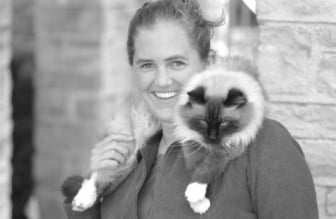 This is Rags and me. This photo was taken for the back cover of my book, Latina Filmmakers and Writers: The Notion of Chicanisma Through Films and Novellas. Photo credit is © Elaina Generally Photography 2007

In 2004, I searched on the Internet to find two Ragdoll kittens for my parents (all in an effort to eventually steal Rags from my parents). I had graduated from college and had just finished two Masters degrees, but had not found a job, so was living at home (and was living at home because my mom would not let me take Rags to live with me elsewhere - so in order to be with him and sleep with him, I remained at my parents' house).

I managed to talk my mom into getting 2 new Ragdoll kittens, Caymus and Murphy.  They were adopted from Bluegrass Rags in Kentucky. Surprisingly enough at the age of 15 (and being an only cat nearly his entire life), Rags was very accepting of the kittens --no peeing as a result! (Learn how we introduced Caymus and Murphy to Rags when he was 15-years old: Introducing New Cats into Your Household).  For being a single cat and only growing up with dogs, Rags took well to the new kittens - more than I thought he would.  Caymus and Murphy's breeder had recommended that we get 2 kittens so that they would play with each other rather than bug Rags and it was a perfect scenario - and great advice.  Worked like a charm. 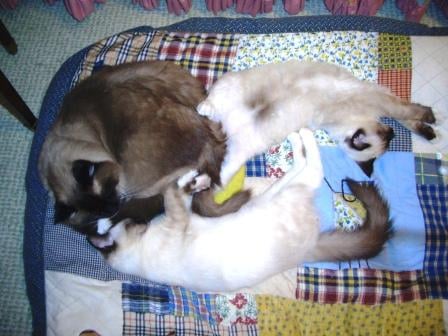 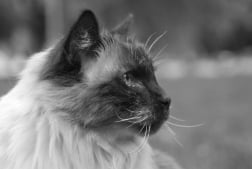 A year after we got Caymus and Murphy, in December 2005, Rags was diagnosed with lymphoma and was given 4-12 months to live if given chemotherapy. If no chemo, then 4-8 weeks.  Against the veterinarian's advice and against the advice of other family members, my mom and I decided that we would try chemo and see if it would help him.  Best decision ever.  He outlived his prognosis and went into remission - Rags lived another 3+ years.  I have a separate page about his lymphoma journey.

Due to his fantastic internist, Dr. Michael Wasmer, at Mission Med Vet, Rags was treated with two different protocols.  Dr. Wasmer consulted often with feline oncologist Dr. Claudia Barton at Texas A&M University as to the proper protocol for Rags' situation. He also had surgery three times - the surgeon was Dr. Jayce Lineberger - what an incredible heart that man has!  Dr. Lineberger now practices in Colorado. 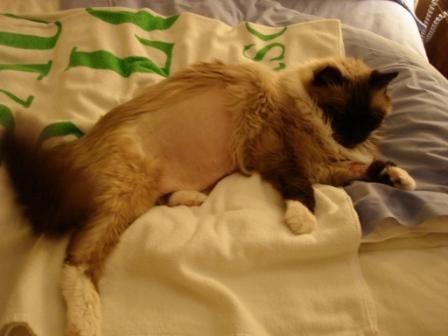 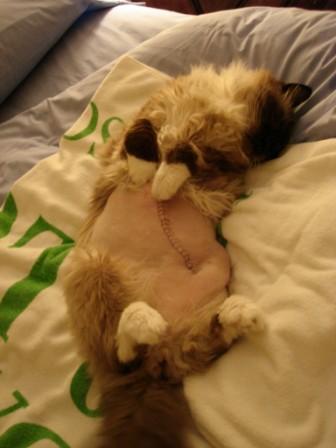 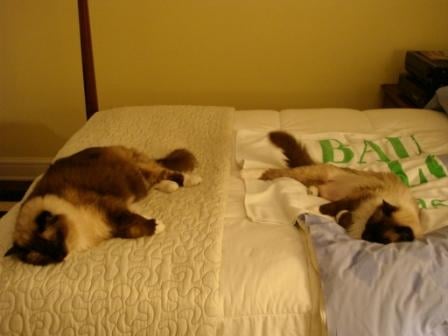 Caymus and Rags sleeping together.

As you can see, Rags responded very well to his chemo protocol and obviously outlived his diagnosis (Rags' life was finally taken from his kidney failure)...in fact he lived another 3.25 years after the cancer diagnosis. I was thrilled, and he puzzled all the doctors...who would tell me, "I don't know what to tell you about that cat anymore--he's incredible". Of course, he had three surgeries to remove tumors--so there was a lot of help. During the last surgery, right before New Year's 2007, they found a tumor in his liver which they could not remove, but it was benign.

Here is the picture of that tumor. You can tell where the tumor is because of the white instrument that is pointing to it. 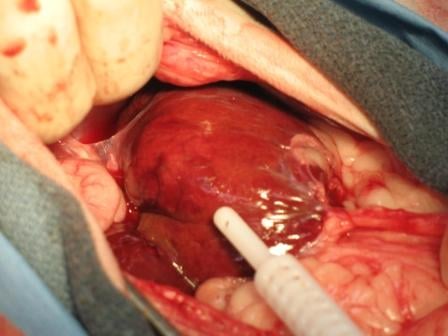 Due to Rags' lymphoma and just because he was an old kitty, he had his blood drawn routinely every three months.  If you are interested in reviewing Rags' medical records from when he was going through his chemo protcol you can see them on Rags' lymphoma page.

Rags was never much fond of toys or treats. But at the age of 15, my mom purchased Rags a Yeowww! Catnip Banana

I honor Rags every year on the site, sometimes several times a year - but usually always on his birthday - August 8, 1989 and on the anniversary of his death - March 30, 2009.

He was an incredible blessing to me - much more than just a cat.  I will carry him in my heart forever.

Thank you for taking the time to read about my Rags - you can see more videos and photos of him below. 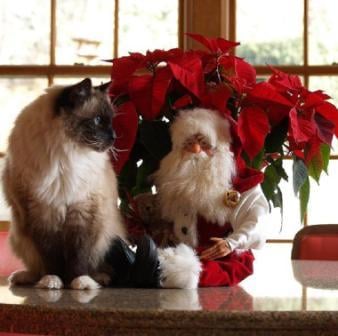 This is Freegie Pooh (what I affectionately called him) near Christmas 2007. He is 18 in this photo! 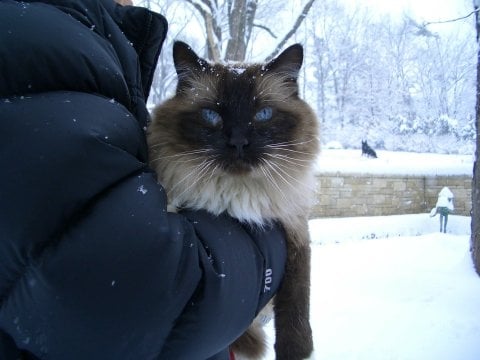 Rags in the Snow 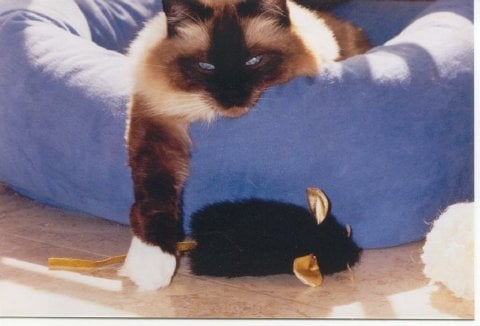 Rags at age 8 with a mouse. 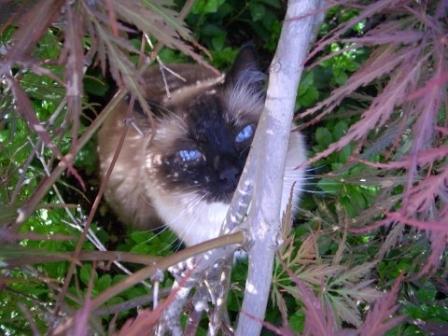 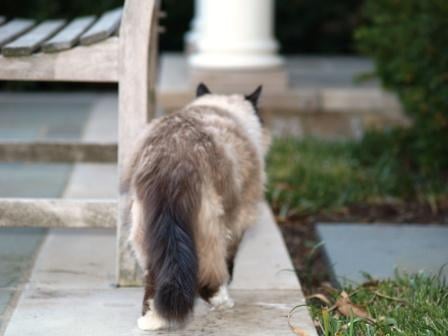 Rags on Patio at 18 years old

These videos of Rags aren't the most exciting in the world, after all, he is nearly 19 in t hem. Rags is a sealmitted Ragdoll cat.

While these videos aren't the most exciting, they are very educational and you can learn a lot about Rags by viewing them. I hope you'll enjoy them.

Rags in July 2008 - I call him a whole horde of names, as you will see...to attempt to get his attention, but the stubborn rock star that he is doesn't allow it to happen. I swear Rags should be a Taurus, not a Leo with his stubborn ways.

Here's another video of Rags taken moments later. I obviously could not get him to move that much--he had just finished eating and was not in the mood to be a movie star.

This is Rags on his daily trip outdoors. I take him outdoors everyday for fresh air and some Vitamin D. He usually looks forward to it and wanders around the perimeter of my backyard and then goes back inside. He is 18 years old - almost 19 in this video. He is always supervised when he is outside. You can tell how arthritic he is by the way he stands.

Rags has always loved drinking water from a faucet. It started when he was young and mistaked the faucet water for a string. He then licked his paws to get the wet stuff off of it and discovered it was water. Of course, as the years have gone by he has become more picky--waiting for it to be ice cold before he drinks it. This video was taken when it was already ice cold.

This is a video of Rags purring.