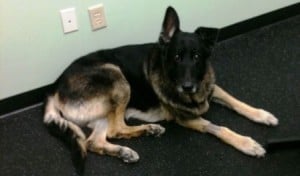 OK, so I know this website is all about cats, but I have featured my parents' German Shepherd, Tucker, before.  So because it's Sunday and that's when I like to feature "alternative" medicine, I thought it was appropriate to feature this today.   And besides, of all the dogs I have ever met, Tucker is my favorite - that's saying a lot coming from a cat person!

Tucker is an 11-year old (turned 11 on Feb 11) German Shepherd.  In early January he could no longer walk on all four legs - he was dragging his back legs.  He was taken to the only vet neurologist in town and after a MRI, it was determined that Tucker has Degenerative Disc Disease.   While the neurologist, Dr. Cellio of VSEC, believed that it was disc issue, he didn't know it was degenerative and had thought it was operatable.  Turns out that it's not. 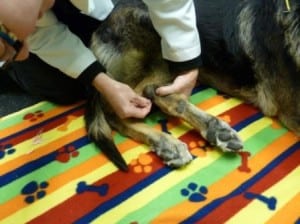 So I asked Dr. Cellio if there were any options.  He said, well, there is physical therapy and when I pushed the issue more and asked about "alternative" stuff, he mentioned Pat Perkins of Canine Performance Medicine.

My parents were out of town at the time and I was taking care of Tucker and their other dog, Napa, as well as their two Ragdolls, Caymus and Murphy.  So I immediately called Canine Performance Medicine to see if we could get an appointment.  They were full for the next 2 weeks.  I said we'd take the first available and to please put us on a cancelation list.

Turns out the very next day after we had rec'd the devastating news about Tucker's Degenerative Disc Disease, that Pat Perkins had a cancelation and Tuckie got to go in.

It wasn't long after his first treatment that Tucker was lifting his back legs up again to walk on all fours.  Before he would just drag his back feet around.  Of course, he was also on Prednisone (the steroid helped reduce inflamation in his spine).

Dr. Perkins also put him on Chinese herbs that were mean to open up his energy blocks.  After his second treatment which included electroacupuncture - he was walking on his own and was reduced to Prednisone every other day. 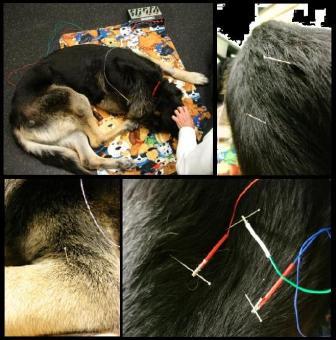 Tucker and his electroacupuncture needles 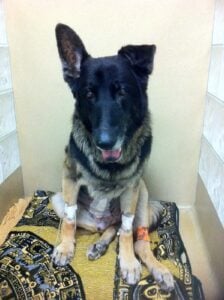 His third treatment was to be Jan. 27 - but Dr. Perkins had the flu, so it was rescheduled for Monday.  The Saturday before that Monday, Tucker went into torsion!  For those of you who don't know what torsion is - it's when the stomach turns.  In Tucker's case it was gastric dilatation-volvulus (GDV) when the stomach is also twisted.

Torsion can be fatal if the animal doesn't have emergency surgery.  It was a Saturday, but luckily since Tucker had had two ACL replacements in his knees and since Rags had be operated on there - we knew to go to Mission Med Vet.  Much to our luck and Tuck's - Dr. Lineberger (finest surgeon I know) was on call!!

Tucker, obviously, made it through the surgery and as you can tell from the photo - had a 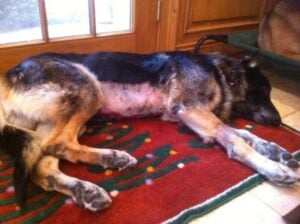 Tucker 2 days after Torsion - at home!

quick recovery!  In fact, he had major surgery on Saturday at about 2pm and then went home on Sunday at 6:30pm.   I honestly believe that it was because of the herbs and acupuncture that Tucker had such a quick recovery - especially at his age.

Although Tuck had an acupuncture appointment scheduled for Monday after his surgery, he was advised to rest, so it was delayed until the later part of the week - Thursday.  So he was totally off his Chinese herbs and his prednisone (in hopes not to cause more gas in his tummy) and continued to walk! 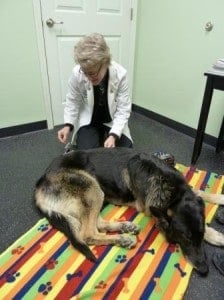 So Tucker is still doing great and will continue to have treatments with Dr. Perkins but he is steady now and walks sometimes with a sway and sometimes with not one. 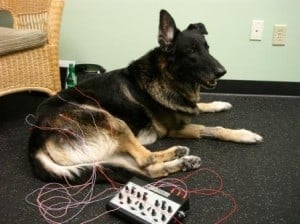 My hope in sharing Tucker's story is that if your kitty or pup ever has an aliment that Western medicine cannot heal, I hope you will reach out to the wonders of acupuncture to see if that will help.

A HUGE thank you to Dr. Cellio, Dr. Perkins and Dr. Lineberger for helping this great dog have not only longevity but a great quality of life.

Here are a few videos that I have taken during his acupuncture treatments - the first one is how Dr. Perkins massaged his back leg muscles - she does this after the acupuncture is finished.

This video was taken at his 5th treatment on the 16th of February.