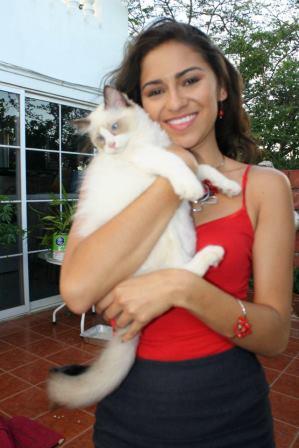 My name is Linda Kelly and I live on the beautiful island of Aruba. Since I can remember I have always been around cats and throughout my years I have been very close to some of them. During my teenage years I remember Mimauw, he was super close to me and used to jump in and out of my window at night to be with me. When I met my hubby he used to joke “well that cat certainly gets to sleep with you while I have to go back home! “ After I married and moved from mom’s home I decided to leave him behind as I was afraid of taking him with me and maybe losing him in the process. He lived many more years with the loving care of my aunt. 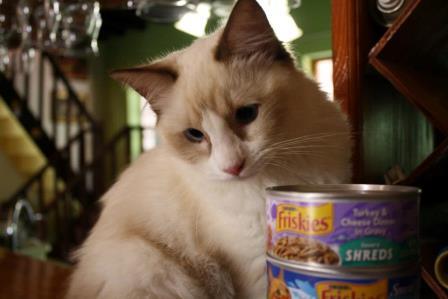 When my daughter was 3 year’s old I decided to share with her my love for cats and we brought two cats home, two females of the same litter, local stray cats -no pedigrees. Tigrita and Nischa lived to grow old with us. I lost Tigrita about 6 years ago and I will never forget that day that I took her to the vet and left her behind alone in her carrier. Only 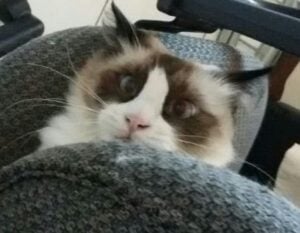 to be called in the early afternoon to hear that there was nothing that they could do for her. She had brain tumors and were too advanced. She was a healthy and active cat but in her last year she started to get seizures and I knew it was not good but I was too afraid that they would put her down which in the end they had to do anyway. She was about 15 years old. To this day I feel guilty and I always tell my hubby that I should never have taken her to the vet to die alone. I can swear that after her passing I felt her jumping on the bed during the night (she used to sleep with me and was such a sweet cat) or I saw the drinking fountain being used while I was alone in my room. Her sister Nischa passed along last year in April, she was 19 years old, my daughter was heartbroken. She basically grew up with her her entire life. 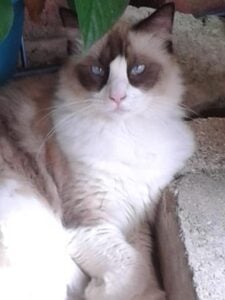 It was a few months after my Tigrita’s passing that I started to think about getting another cat. Here on the island we do not have cat breeders as people are more into pedigreed dogs and they are more popular. So we do not have any specialized cat breeders. However I always remembered a friend from New York who brought with her her two pedigreed cats. I never forgot that long haired Siamese cat. I knew nothing about breeds at the time, so I started research on the internet for cat breeds . There were so many breeds to chose from but I was immediately drawn to the Ragdoll breed and I liked everything I read about them, those blue eyes, the flopping over, their sweet nature, their coloring, the following around, the perfect companion. I was dreaming of how to get one and in 2012 an opportunity arose for my daughter to participate in a pageant in Houston 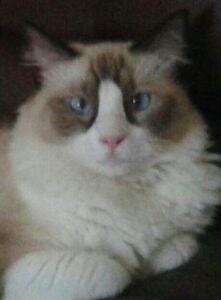 Texas. I decided right then to do my research for breeders in that area. I came across a breeder in Spring Texas, Kazodolls Cattery and asked my questions and arranged to meet her while we were there. I drove with my hubby to meet “Jessie” her kitten name at the time. By the time we met her she was already 3 months old as she was born on March 23 and the owner, Elizabeth and her son were greatly attached to her, they were not even sure they wanted to give her up. I remember her telling us that “Jessie” liked to cuddle with her and was very playful with her son and had this toe biting habit in the mornings. I decided to take her and next thing we know we went to get her on our last day in Houston. We got her in her carrier and in the time it took us to get back to the hotel she did not stop meowing for one minute. By the time I got to the hotel I was already dreading the flight for the next day. I never flew with a pet in my life and was anxious. That night I did not sleep at all trying to get “Jessie” comfortable with us and her surroundings. And yess you guessed it, even though I gave her some drops to calm her down for the flight she basically meowed the whole flight to Aruba. I will never forget a male drunken passenger telling us to give that cat some peanut butter to shut her up. She basically meowed to the point she had no voice anymore. The poor kitty was not used to being closed off and as you were not allowed to have them out of the carrier during the 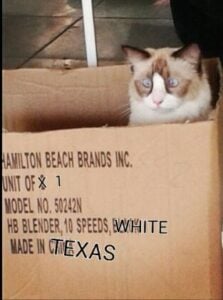 flight, she was not a happy camper. Poor thing! You cannot imagine my relief when we finally landed. But I never regret passing through that to get her. After a few days at home I told my husband I was changing her name to Sassy. I have never encountered such a saucy, temperamental, playful, energetic kitten. Sassy is a saucy sealpoint bicolor female Ragdoll cat, she is a big boned fella full of mischief and super vocal. She will let you know when she is displeased and purr like a kitty when she is in a good mood. And yes, she still has that toe biting habit which she transferred to my hubby . Sassy got along fine with Nischa who was the queen of the house at the time, our other male cat and our Yorkie Allie. Those two got along like they were part of the same litter. And guess what? All that bonding I was thinking I would have with her? Well, she choose to bond with my daughter instead….yeppp…purring, trailing after her, sleeping with her all the good stuff while she only bosses me around for food or to get her out to the garden…everything else pure love for my daughter and even my hubby who is a dog lover. He always teases me that Sassy stole his heart, he has never come across such a sweet loving kitty in his life even if she wakes him up at 5 am to get up or bite his toes when he does not want to wake up. As a child he had asthma and was not too happy I loved cats. Told him….I come with my cats, take it or leave. There were many times of red teary eyes but he adjusted over time. 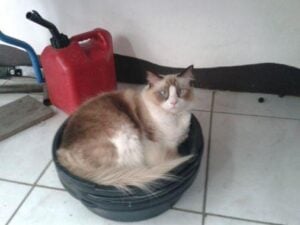 Sassy likes to do acrobatics like jumping from the window sill onto my sleeping daughter’s abdomen like a trampoline to wake her up to get out of her room. Can you imagine being woken up by a 15 pound cat around 5am? She likes cuddling, watching the birds and lizards outside. She walks on a leash and loves to go for stroll in her stroller or go for a ride in the car and follows my hubby wherever he goes. 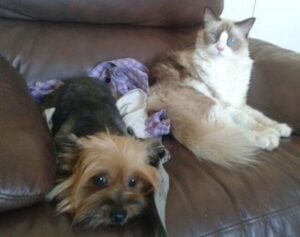 And talking about vocal, she does this loud meowing when she does not get her way. Sometimes I wonder if indeed she is a female… she sometimes meows in this high pitched voice of hers that you will come running to see who is killing her. I have had pet sitters being scared of her loud meowing when we are away. And yess, when she is the garden and sees the neighbors cats outside she will do exactly like a male cat and chase them away.

We all love her to pieces and after Nischa passed away she is now the Queen of the house. She is our Sassy girl and we cannot imagine our life without her. However, I could not help myself after she did not bond with me as I had hoped, I got myself another Raggie, but that is another story, Smokey’s story…..