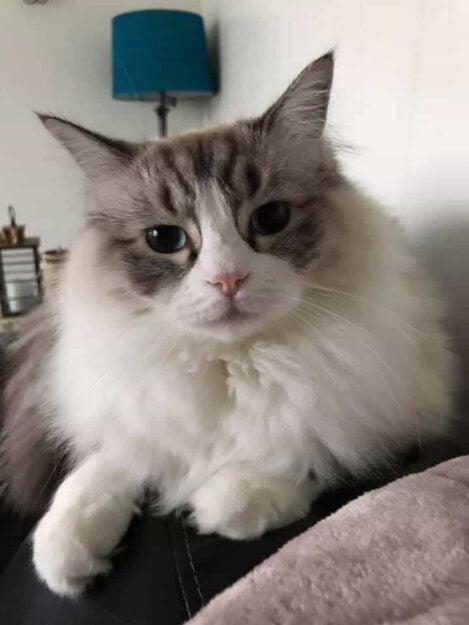 Bella Boo is a 1 ½ year old chocolate lynx with a beautiful blaze that my granddaughter named after Beauty and the Beast. My granddaughter calls her Bella Boo when she face times with her.

Bella came from a very sweet breeder. He was genuinely sad to see her go and enjoys updates on her progress. I had gotten on the waitlist for the breeder and was originally told that it would be a minimum of 6-9 months wait if I wasn’t fussy about color. Well about a month after I was on the list he contacted me that he had a kitten that everyone on list passed on because of coloring preference, so I went to meet her. 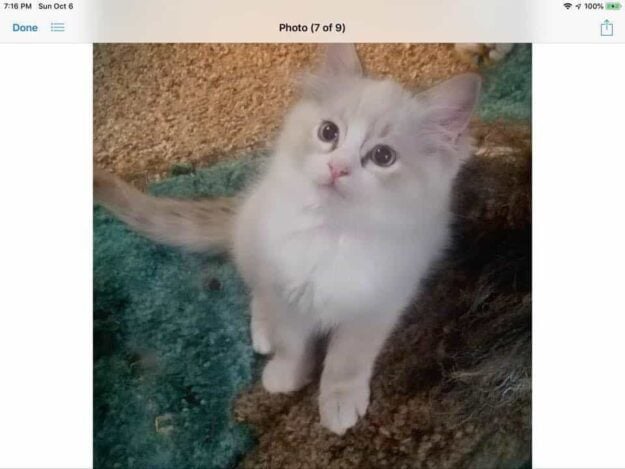 She was shy when I went to meet her but she was sweet and she let me hold her. She was shy in that unlike most young kittens she didn’t just come easily to play. I didn’t think much of it because I had arrived at the house just as the breeder came home so there was activity and change. Anyhow, I did have my color preferences of blue or seal pointed and no lynx, bicolor or blaze, but I was flexible. 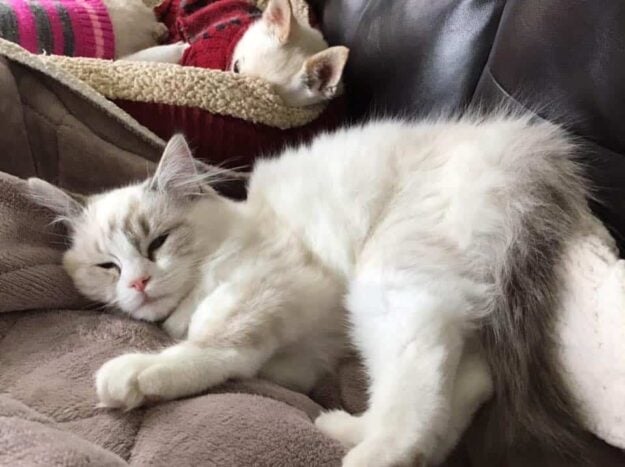 Well as you can see she had every color feature I did not want! I decided you don’t get an animal for color and waiting 6-9 months would put a cat in my home in the middle of some construction, so even though she wasn’t the fit I wanted I pulled the trigger.

She was 12 weeks old at this point so she came home with me. It was quite an adventure because I quickly learned her shyness wasn’t just about the flurry of activity. It was part of her. The first night I decided that I would keep her in the spare bedroom and would sleep in there with her. The room is closest to my living space and I wanted her used to noises of the dogs and household. 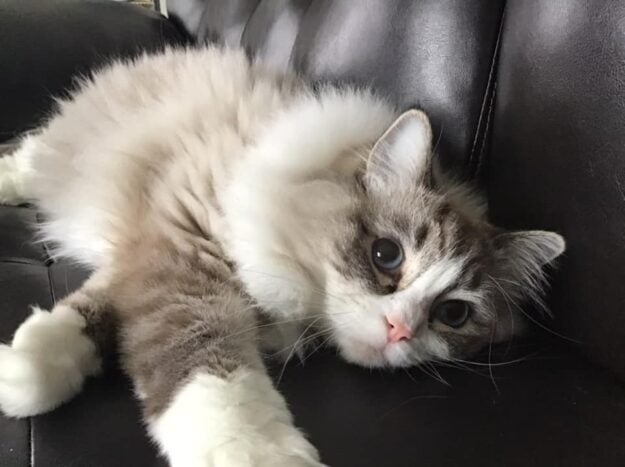 It a sparse room with a bed, washer/dryer and my desk and computer. The closet was empty without a door on it. Well that night I went in and got her to play a little bit and cuddle. She was still so obviously terrified but like rags do she kind of froze when held.

So I crawled in bed and set her next to me. Before going to bed I had blocked access to behind washer/dryer and desk. Well I got up a couple of hours later to use the bathroom. She wasn’t in bed with me and I couldn’t see her under the bed. I got a flashlight to make sure that under the box spring wasn’t torn and finally lifted mattress to determine she wasn’t under the bed.

I had blocked the washer and dryer but looked behind it just to make sure as I know kittens can get into small places. At this point I panicked because I thought did she follow me out of the room and I just didn’t see her? I searched that house from top to bottom. My house looked like it had been ransacked.

I couldn’t imagine she was out of the room because my other cat would have been reacting to her and not calmly asleep on the sofa. So back to the room I went. I lifted the mattresses again, yanked off all the covers, looked inside washer and dryer even though the doors were closed.

I got a bright flashlight and got on top of the dryer and there she was underneath a white PVC pipe. She had blended in perfectly! She was stuck, so at 2 in the morning I was calling my neighbors to come and move the dryer to get to her. By 3 am she was out and safe and unharmed but terrified.

I then decided that she would be better off in my bedroom even though it displaced my other cat’s favorite spot and was further from the living spaces. At least there were no dangerous places to get into. Any place she crawled into there I could get to her to rescue her. So by 4 am her litterbox and food etc. was moved to my room.

I woke up in the morning to vomit on the floor that contained a bunch of gray hair. Here she had chewed a chunk of my hair off after I fell asleep. It took a minute for the chunk to grow back so I had a reminder of one of the worse nights of my life for a few weeks!!! The whole thing is comical now but it was probably one of the most stressful, terrifying and irritating nights of my life! 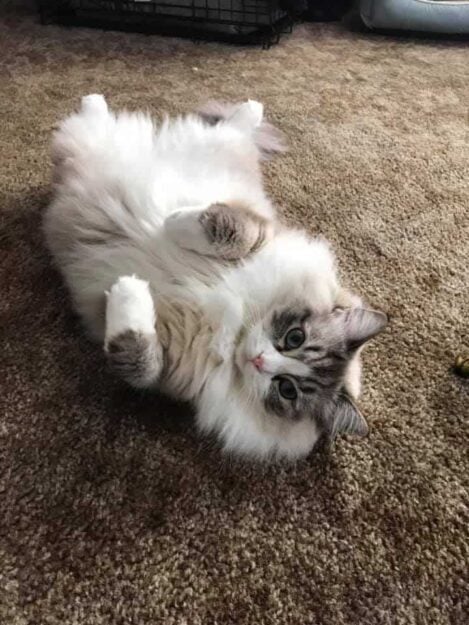 Well I noticed that her adjustment to the house was slow and she remained skittish through isolation and even after she gained her freedom to the rest of the house. She didn’t like to be petted or held and kind of stuck with the other cat and the dogs more.

She also started to bite and by 6 months was going into a frenzied panic whenever anyone came to my house. Even when I would leave the house and come back in she panicked and acted like she had no clue who I was.

With the panic attacks she would run to the basement and hide in this box that furnace filters came in. She wouldn’t come out until I would go retrieve her. I decided once to see how long but at 18 hours I went to get her. Each time after I got her out she would run upstairs like she was going to go hide but by the time I would get to the top of the stairs she would be like nothing ever happened. 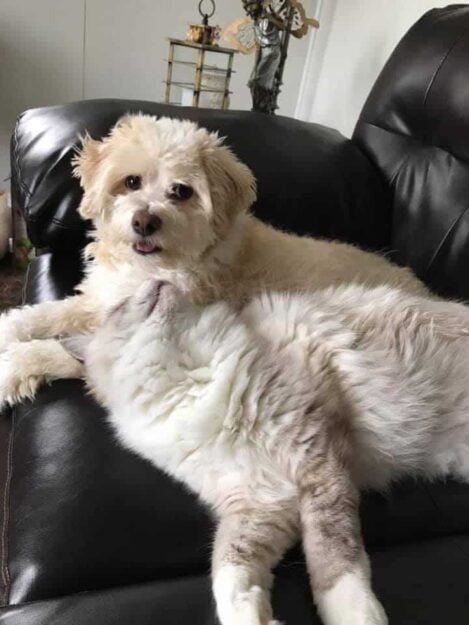 It was truly heartbreaking to see this happen. She also started becoming aggressive with the two dogs and my little 5 pound Chihuahua was injured several times from her biting, clawing or pouncing on him. These were more aggressive than just play.

My other poodle mix had also growled and snapped at her which was so out of character for this dog. A few months went by and I saw a post about Prozac. I took her to the vet and she has been on Prozac for going on 3 months now and she is a different cat. 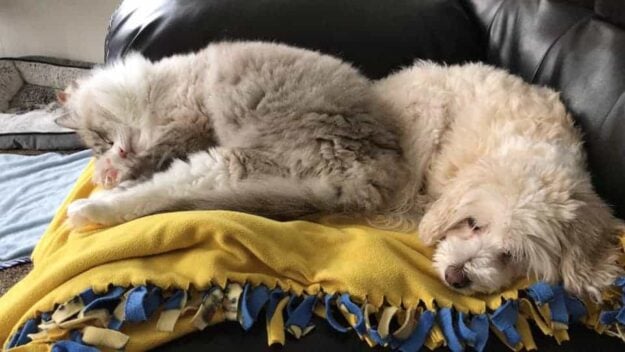 She doesn’t care to be held, but she now enjoys petting and will usually be found near me whether at my shoulders or my feet. She is much calmer and no longer attacking the dogs. At one point I had honestly considered rehoming her, but now I can’t even imagine life without her. The vet wants to keep her on the Prozac for 6-12 months and try weaning her off to see if it has reshaped her brain waves and behaviors to live without it. 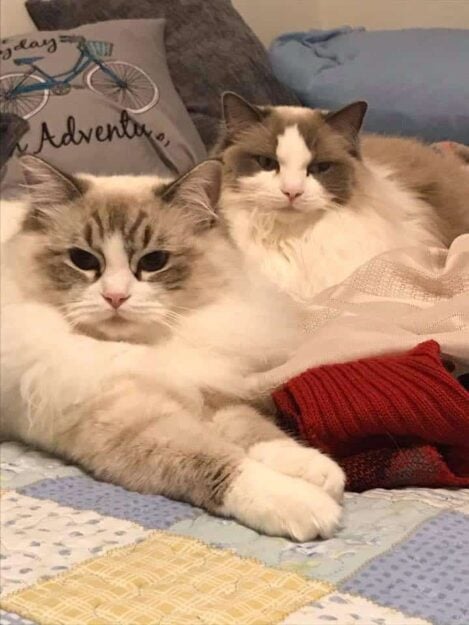 Bella loves the window cat seat that I have in a bedroom window. It looks out over a couple of trees that birds, squirrels and neighborhood strays hang out in. I also have a tall cat tree at another window that overlooks the yard the dogs play in.

I have noticed when they go outside she is up in the window watching. Bella loves the tunnel, tinfoil balls, and cardboard scratch pads.

I have a Litter Robot and I can’t even imagine having a cat without that. It was a life changer as I have a bad back so bending over to scoop every day was a challenge. Bella’s absolutely favorite thing in the whole world is shredded cheese.

I will sometimes “accidently” drop shredded cheese for the dogs and she is right there pushing the dogs aside to get her share. Bella loves to hide but she is really truly not very good at it. I find her with half her body sticking out under the bed or behind the shower curtain with just her tail sticking out. She is also the ultimate flopper. She sleeps on her back most of the time. The ragdoll belly and curled up paws is just so adorable to me!

It has been a long 12 month journey with this girl but I now can’t imagine life without her.