Sinatra - Ragdoll Cat of the Week My love of White Cats began when I was very young. One of my most favorite memories as a child was visiting my aunt (who lived on a farm), there was this gorgeous white fluffy cat (see photo).

When it was time to add to my Ragdoll family, I went back to the same breeder that I got my first dear sweet ragdoll from. Sinatra is almost 2 years old and is a BEW (Blue Eyed White) Male Ragdoll. Sinatra was born 8/17/2014. As most BEW are, Sinatra is completely deaf, but this does nothing to slow him down! In fact, I talk to him just as much as I do my other Ragdolls, and I catch myself remembering that he can’t hear a word I am saying!! The breeder had originally named him Marshmellow, as he was just a big ole fluffy Marshmellow. I changed his name to Sinatra (ole blue eyes), as I felt he heard his own music and because of his blue eyes, like Frank Sinatra! Sinatra is just one big fall of fluff. (14 lbs of fluff) His fur is long and silky soft (reminds me of bunny rabbit fur), He loves to be brushed as well (which I do at least once a day).He is not a lap cat, but he does have to be at least be able to see me. He follows me around, lays at my feet or beside me on the couch. His eyes are so blue, although in many photo’s you can’t see just how blue they are.

He always comes in the bathroom when I take a bath, and lays on my bath mat until I am done. As most Ragdolls, he loves running water – I think mainly because he can’t hear, the noise doesn’t frighten him at all. In the mornings he will put his front two paws over the edge of the tub, and beg me to feed him bath water from the tub. I have to cup water in my hands and feed it to him, and he just drinks it right out of my hand. If I stop doing this before he is done drinking, he will take his front paw and “paw at me” until I continue (crazy cat). Then he will lay on the bath matt, until I am done, then when I leave bathroom, he will pick up corner of bath mat and bring it to me – like “here you go Mom, you forgot something!!” Its so funny. He likes to be wherever I am, as long as he can see me. 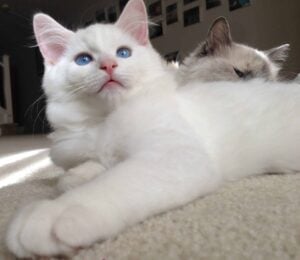 I have another ragdoll (from same breeder) and sometimes I think they know they both came from same place (different moms & dads), as Sinatra is NEVER very far from Shadow. He likes to curl up with him for an afternoon snooze.

Sinatra, who I call affectionately “Fluffy Butt” is chief comedian around here. He plays with just about every toy in their toy box, and when that’s not enough, he will run (a million miles an hour) from one of the house to the other at the speed of light (sounds like a herd of elephants), until Shadow chases him, then the fun starts. He likes to climb on top of my kitchen counter, and if I don’t put the lid on my Crockpot, he stuffs his fluffy self into the crock pot for a snooze. He is such a character. Sinatra lives by his own clock (many times I hear him playing with toys at 2am), and then he will come prancing into my bedroom around 4am sit right next to my pillow, and start meowing, like “WELL, aren’t you getting up, after all, I’ve been up for HOURS!!” lol

Sinatra’s favorite position is to just lay belly up, hoping I will start rubbing his tummy. He purrs the moment you touch him, its like his on/off switch. He purrs loudly, not sure if it has anything to do with him being deaf or not. He is a dear sweet soul, and has been a wonderful addition to my Ragdoll cat family. 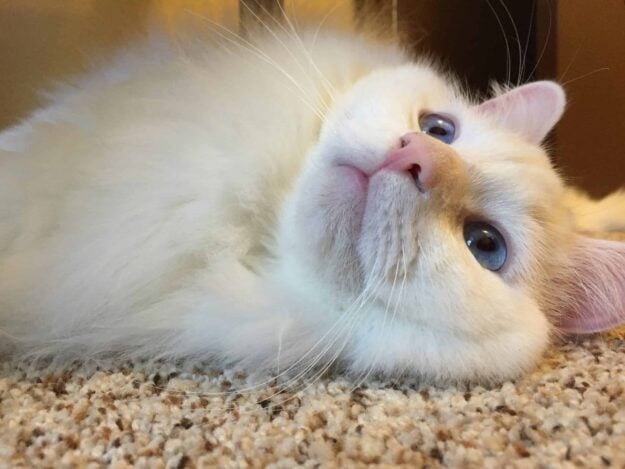 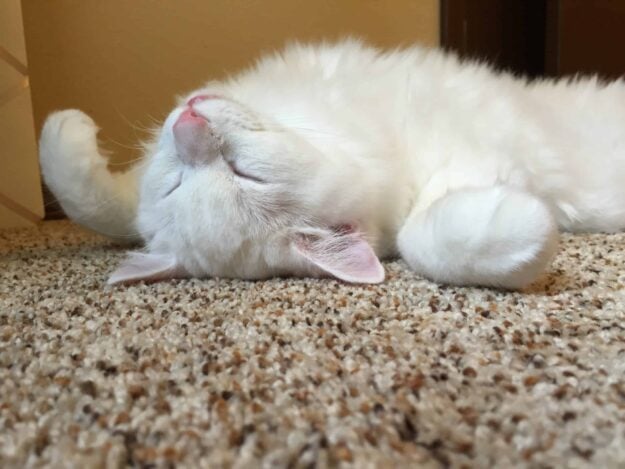 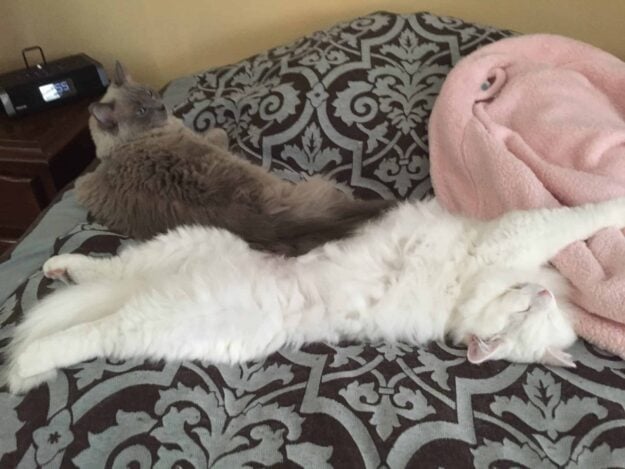 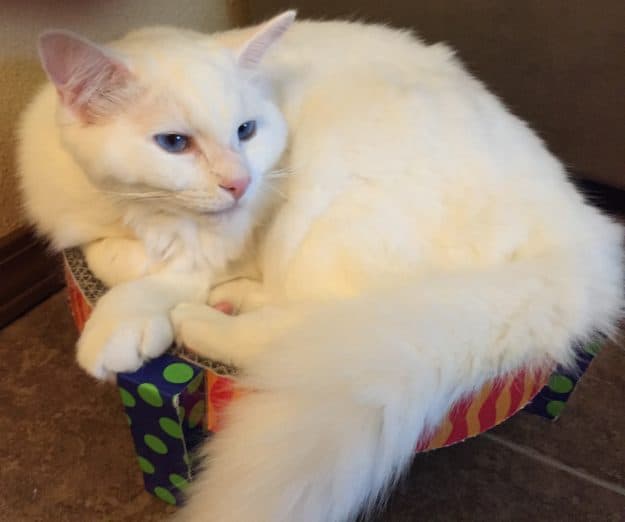