Shadow - Ragdoll Cat of the Week 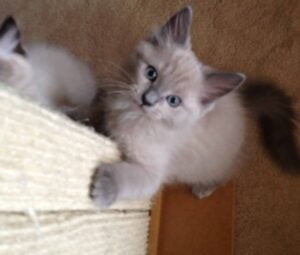 Shadow is a Blue Point Ragdoll, who was born 4/8/2013. He was named Nevan by the breeder (I later changed it to Shadow) He truly lives up to his name. His story starts with visiting a Ragdoll Breeder in Smithville, Texas in 2013, in search of a seal point mitted boy. I had seen a beautiful seal mitted boy on her website. I lived in Cedar Park, TX at the time, so this was only about an hour away. I had spoken with the breeder both by text and email and she suggested I come pay her cattery a visit, so I could interact with the one I wanted to make sure personalities, look, etc all matched up with what I wanted. What I later found out, she also screens who she allows to buy her Ragdolls, as she really feels such a connection to these animals that she wanted to make sure they went to good homes: places where they 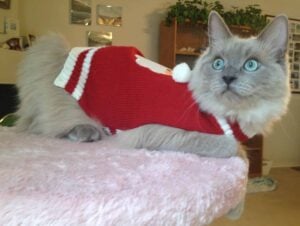 would be spoiled, as a Ragdoll cat should. I never realized breeding was such a time consuming field until I saw the care she gave her litters. She spends countless hours with the kittens, training them to use a litterbox, teaching them how to play and making sure they are fed and vetted appropriately.

I arrived at her very clean home (which was somewhat surprising considering she had several litters of kittens at the time). No cat smell – lots of toys for the kids to play with, lots of places for them to snooze. 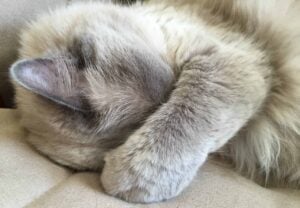 The seal point male was so busy snoozing with all his litter mates he really didn’t want to interact with me at all. We tried to “wake him up” and get him to play, but he really wasn’t in the frame of mind to play, like the other ragdolls were. However, there was one Blue Point boy that was just a bundle of playfulness, running around, and he jumped right up in my lap. This boy had aqua eyes; his fur was a light grey, with a lighter grey nose. His fur was so soft. One thing I noticed about him right away is he did not use his claws. It was summer time when I visited the cattery, so I had shorts 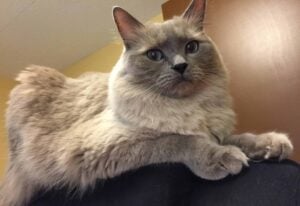 on, the other cats, playing, jumping would scratch me (not on purpose) but they were still young kittens and learning. Shadow did not. Actually the breeder told me she had not listed for sale, as she was going to keep him. She said he had never interacted with another potential customer in this way. He was playful (he played fetch) and kept returning to me, to sit on my lap and then next to me, as if to say to me PICK ME, PICK ME! She said when she saw this, she knew he wanted to go home with me as he never did that with anyone else that visited her cattery. They say cats can sense “cat people” and Shadow truly picked me and once I saw this lovable personality, I could not say no to him. 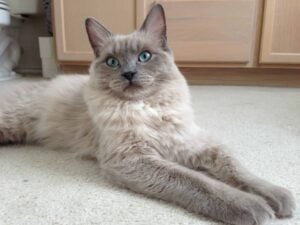 Although I had my heart set on a seal point mitted kitten, I could not turn down my dear sweet Shadow. He has been my constant companion over the last 3 years. He plays fetch (his favorite is a catnip mouse), which he constantly chases under the sofa. Its like Christmas time each week when I vacuum, he finds all his mouse toys he chased under the sofa.

I have spoiled him with whole life treats each day. He knows where they are kept (refrigerator) and every morning, he runs to the refrigerator to get his treats. When you ask him, do you want treats? His ears perk up, his eyes get big, and he meows a YES! One thing about Shadow that makes him so unique is he always connected with me, since I visited him the first day, as if he knew I was to be his mom. Every nite, he will climb up in bed with me, and he kneads on my neck and tries to suckle on my neck, as if he is nursing with his mom. I figured he would grow out of this, but after 3 years, still does this. I think this is his way of staying connected to me, and telling me he loves me. He is not a lap cat, but he follows me from room to room and always sleeps at the foot of my bed, as if to guard me while I sleep. He truly has lived up to his name Shadow .

Shadow has grown from an adorable little grey kitten I visited to a regal Ragdoll, with a large fluffy tail. He loves to be groomed daily. He rarely sheds, as his tail is the longest fur on him, as most of the rest of his coat is smooth, silky, but not fur that sheds. I believe he is also part Mink, so I think that is why he doesn’t shed much.

His favorite toys are his catnip mice, and a pink feather show gurl (he plays fetch with both). He loves to long cat naps in the afternoon, and sleeps in the craziest positions. He sits on the top of the back of my office chair when I am on the computer. I spoil him, as he has shown me unconditional love that so few humans ever get to experience.