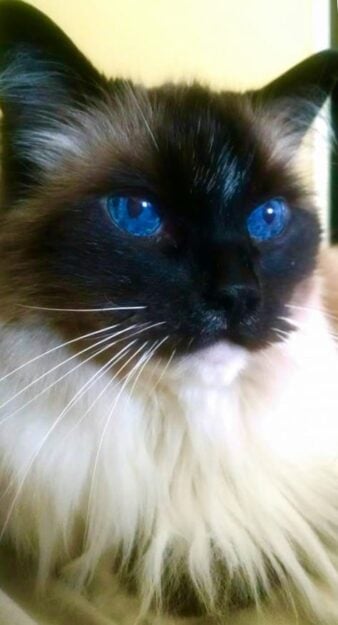 I never had cats in my life growing up. My love for cats started when I began dating my husband over 30 years ago. He had two females he adopted who were cheap entertainment to me! Shortly after getting to know how enjoyable having cats in your life can be, I decided to rescue two of my very own. Since then, there hasn't been a year in my life that I haven't had one or two cats sharing my home and giving me the love and devotion I so desire. 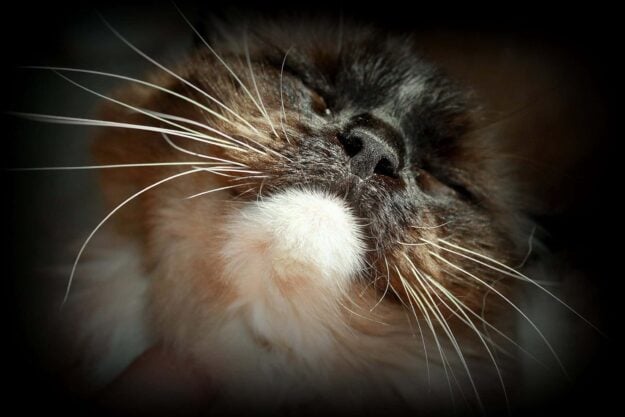 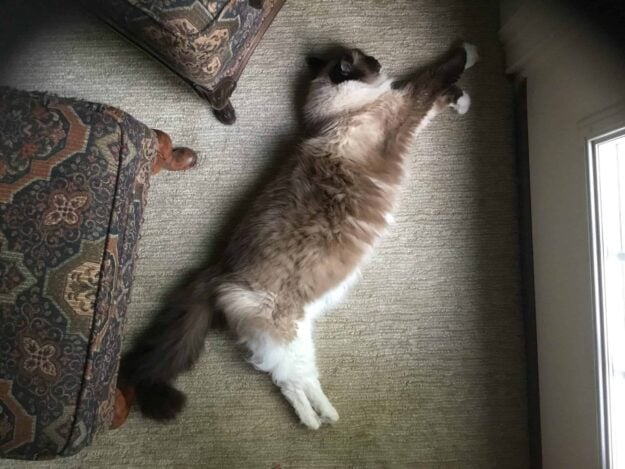 Three years ago I lost what I thought was going to be the "last cat." I've had many last cats. As a matter of fact, every cat I've owned has been the last cat! It's so heartbreaking going through sickness and loss. I had just started to celebrate and embrace the idea of not having a litter box in the house, or hairy chairs to clean or those dreaded vet bills to pay. But at the same time I also started to feel an emptiness creep in and less joy without a cat snaking around my ankles. And then, just like that, the cat gates of heaven opened and dropped a bittersweet opportunity down into my lap. The bitter was I learned that my friend had a very sick dad who had to go into a nursing home. The home wouldn't allow his beloved friend of 16 years to go with him. The sweet was his long time friend Boots found a place in my heart and home and is now 19 years young! 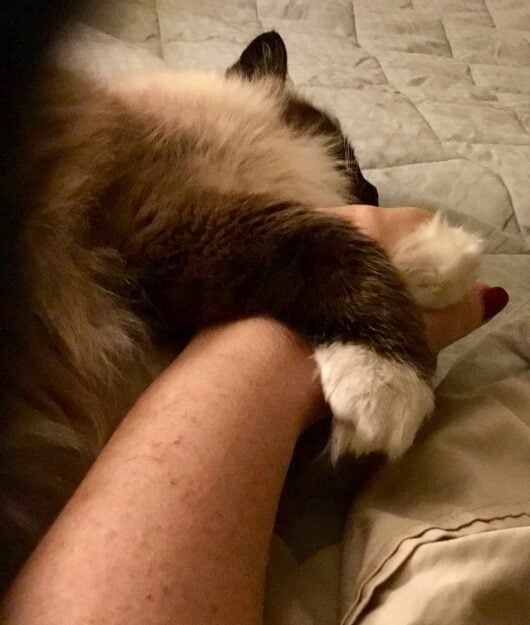 Boots used to be part of a Ragdoll duo "Puss & Boots" until Puss passed on. According to Boots' paperwork he was purchased from a breeder in New York called New York Dolls. I've tried to Google them with no luck. I thought the breeder would get a kick out of the fact that one of their cats is still going strong after all these years. Boots was purchased for $900.00 which back in those days was a lot of cat dough! Well we all now know he was worth every penny because not only is he stunningly handsome but more importantly he is very healthy. On a recent visit to the vet all of the staff was amazed at the great condition he is in. With the exception of tartar on his teeth, he is still going strong! Hey, at least he still has teeth! Boots still loves to eat and grazes on dried food all day plus a 1/2 can of food in the morning and the other 1/2 in the evening. He maintains an 11-12 pound gorgeous figure. 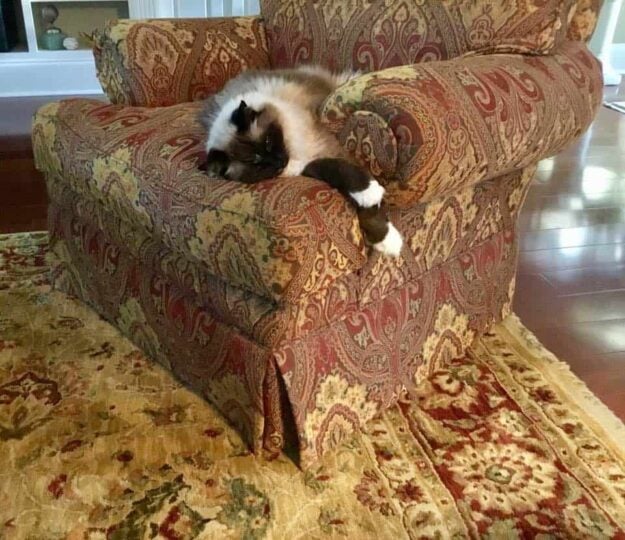 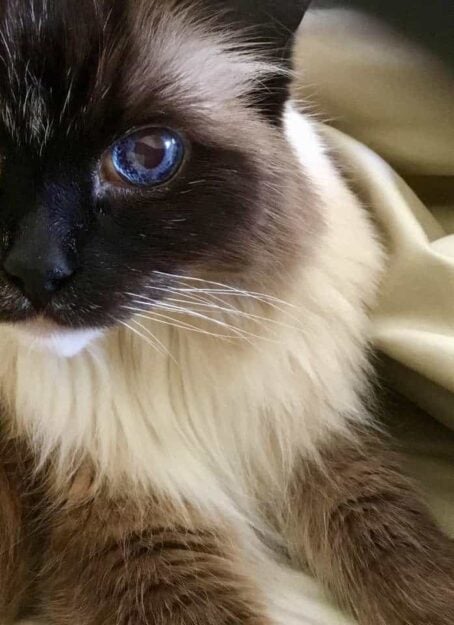 I wish I knew Boots as a kitten and young cat, because I've only known him as an old man. He is very laid back, sleeps a lot and is basically a bundle of love when he is awake. He is very good at giving hugs when you pet him. He is no longer interested in toys and playing and is more interested in finding a place in the sun to warm his bones. He doesn't look outside much anymore because he lives with clouds in his eyes. He has quite the nose because he can still run across the room and find his favorite catnip flavored treats we toss around. He can be very vocal at times and has an unusual sounding meow. Actually he doesn't really meow, he expresses himself with a variety of grumpy sounding grunts that mean different things. 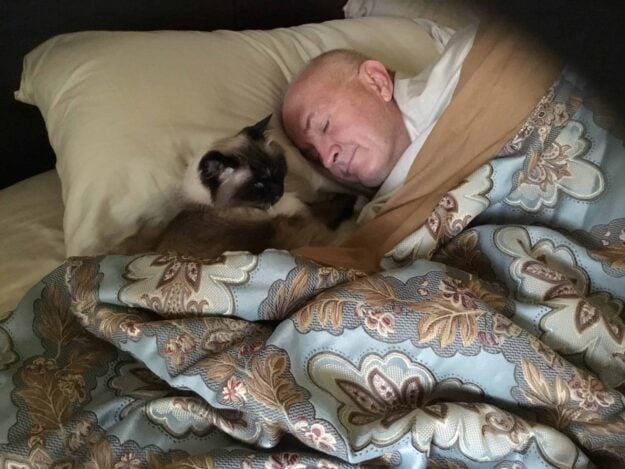 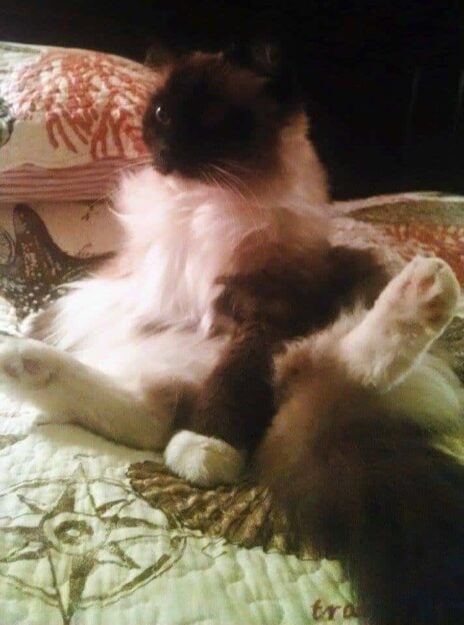 Boots' most outstanding feature is his extremely blue eyes. One look at them was all it took for me to tell my friend "I'll take him." I've never regretted one minute of my impulsive decision to adopt him. I realize how fortunate I am to have this beautiful creature in my life. Because of his old age, not one day has gone by that I've taken him for granted. He has taught me how each and every day is so very precious. I pray my ol' blue eyes still has a few more birthdays in him because he is going to be my last cat. 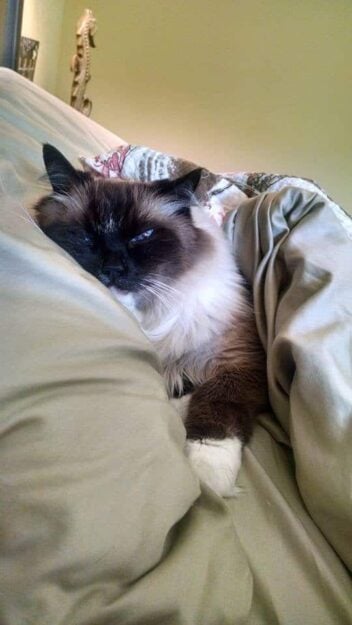 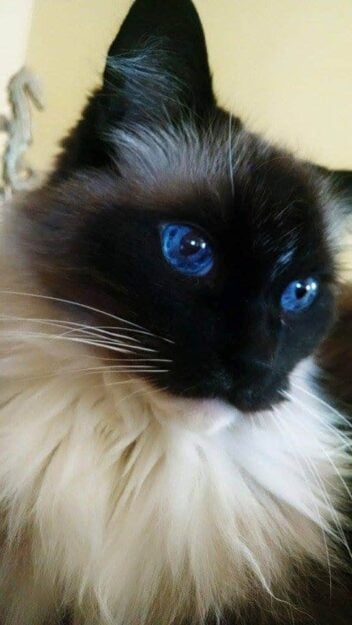