Have you seen a TV commercial for a round litter box with steps, but you didn’t catch the name? There’s a good chance it was the Litter-Robot 3. While the Litter-Robot doesn’t come with steps by default, it is one of the most popular round self-cleaning litter box options you can buy, and there is a ramp that serves as steps you can choose as an extra accessory.

Herein I’ll tell you more about the Litter-Robot’s ramp accessory and why it’s useful, why you should consider a self-cleaning litter box and some other options that have steps.

Upgrading the Litter-Robot to a Round Litter Box with Steps

So the first question is, why would you upgrade your Litter-Robot 3 to one with steps? The Litter-Robot on its own isn’t hard for most cats to access. They can normally hop up onto the step and then inside the globe with little trouble.

However, smaller cats or those that are elderly, and that may walk a little more gingerly, might not be as comfortable having to jump up to climb in. That’s where the ramp can really help – it adds a couple more steps to give a gentle walkway, with no jumping required.

The ramp has another benefit too – it helps to reduce litter tracking in your home. The same rubber step mat from the Litter-Robot 3 is used in the ramp, but you now have extra steps to catch any litter that is displaced as the cat steps out, with a lip keeping it all in place.

This makes it even easier to clean up – instead of it being all over your floor or a mat, it’s kept held together, so you can scoop or sweep it up, or just vacuum it in one spot.

That deals with the why – what about the how?

Installing the ramp accessory really is easy. The rubber step mat that already sits in the step of your Litter Robot 3 just needs to be lifted out. This reveals a recess, which the ramp then slots into securely. You can then replace the step mat in the top of the ramp, and you’re done. It really is as simple as that.

It does need to be simple though, because the ramp blocks access to the waste drawer. It’s not a major issue – you’ll just have to remove the ramp every time you want to empty your Litter-Robot. Just lift it away, slide out the drawer as normal, and then replace the ramp when you’re done. It only adds a quick extra step which is not too inconvenient at all.

Of course, the ramp comes in two colors to match the Litter-Robot colors. So, everything looks great when it’s installed – it won’t look like you’ve added a separate accessory at all, it just looks like it was part of the litter box when you bought it in the first place.

If your cat struggles with leaping, the ramp is a good accessory for your Litter-Robot that just makes it a little more comfortable to climb into.

Why Buy a Self-Cleaning Litter Box:

A self-cleaning litter box like the Litter-Robot makes life a little bit easier. There’s no need for a cat litter scoop – it does all the work for you. Depending on which automatic litter box you buy they can work in different ways, but broadly they are the same.

I’ll use the Litter-Robot as an example as it’s one that we’ve used for a while now, and I’m a fan. It has its own scoop inside, and once it detects that the litter box has been used by your cat, it starts to rotate the whole pan. This means that any soiled litter and solid waste is filtered out, where it just drops into the waste tray at the bottom.

Most automatic self-cleaning trays therefore only work with clumping litter. If you or your cat prefers crystal litter then there are very few self-cleaning options available.

Generally, an automatic litter tray like the Litter-Robot just helps you out since you have one less chore to do. Instead of manually scooping, you just need to empty the waste tray when it’s full and make sure that the litter levels are kept topped up.

You can also choose the upgraded Litter-Robot Connect, which is a Wi-Fi model. One of the best benefits of this is that it can tell you if your cat’s litter habits change, since it tracks the times and frequency used. So, you might be able to detect a little sooner if your cat has a health problem.

It does only work with a motion sensor though, so it’s not as accurate if you have multiple cats sharing the one litter tray. It won’t be able to tell you which cat has used the tray at any given time. It’s still useful though and helps with other things like sending you notifications when it’ll be time to empty the tray.

More Options for an Enclosed Litter Box with Steps

Of course, if you’ve been searching for a round litter box with steps, you might not have wanted the Litter-Robot. It might have been something else you’ve seen advertised or just a style of litter box you wanted for your cat.

So here are two other enclosed litter boxes that have some form of steps, suitable for cats who want an easily accessible, private space. 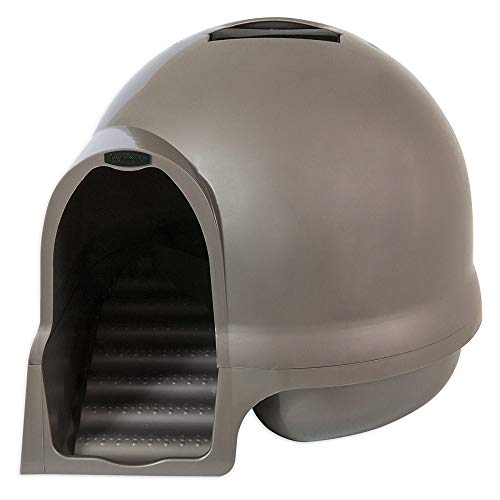 This isn’t a self-cleaning litter tray at all, but if you want a cosy space for your cat then the Booda Dome is certainly that. The round, enclosed dome lets your cat have a quiet, secluded area to do their business, and the gentle steps have two benefits.

It’s supposed to make it easier for smaller cats or those who are elderly to climb into the box, and also helping to remove litter from paws as the cats exit. So you should see less litter on your floors.

The dome is available in two colors and has a handle on top, to make it easier to remove the lid and clean out the tray when you need to. It also has a filter, which it says will help to reduce odors and keep the smell of the litter tray inside the dome.

However, it is quite a small box, and might not be suitable for larger breeds (including Ragdolls). And if you look at the reviews, then they are definitely mixed.

Part of the reason for having steps is to help elderly cats, but one review claims that the drop from the steps to the bowl is quite high. Others have criticized the cheap plastic material, how the seam between the bowl and the lid can leak, and that the smells aren’t contained well at all.

Some reviewers are positive on it, so it’s up to you. If you think it looks good for your cat, it’s certainly not super expensive and so might be worth a try. 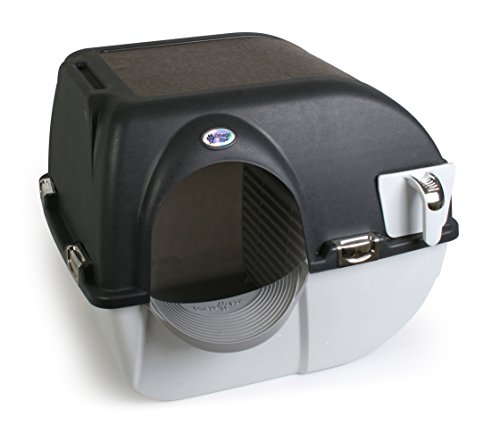 So this litter box doesn’t have multiple steps – just the one, but it is a curved step that’s low enough to make the litter box accessible for most cats.

That step is ridged too, which is useful for two reasons – it gives it more grip, so your cats aren’t going to slip and fall head-first into the litter, and also again it can help to clean paws of litter before your cat steps onto your floor. However, with the angle of the step, even cleaned litter is likely to fall outwards.

This litter box claims to be self-cleaning. It’s not, as it does need some effort. The design works by having a sifting grate inside. You roll the litter box upright, which passes all the clean litter through the grate, collecting the waste separately. When you roll it back, the clean litter falls back through and is ready to use. You can then just slide out the tray to remove the waste.

The materials used are meant to be better than cheap, flimsy plastics you sometimes get. The body is a durable, thicker plastic while the clasps that keep it held together are chrome-plated. Reviews on these are mixed – some people are saying it’s now a challenge to snap the clasps together, which eliminates a lot of the benefit of an easier-to-use litter box in the first place.

Other reviews have criticized the size too – again it’s not ideal for larger cats. They might struggle to turn around and get comfortable, and if they’ve compressed against the side then you might get leaks.

The Best Round Litter Box with Steps:

I’ve been a fan of the Litter-Robot for years, and if you need a litter box with steps then the ramp accessory could be really useful. It does take away a lot of the effort involved in cleaning up after your cat, and the ramp just makes it much easier for cats who struggle to walk and jump well to get inside. It’s also helpful for keeping tracked litter in one place, so cleaning gets even easier again.

Let me know if you’ve bought the ramp and like it, or if you’ve got another solution for an older cat or kitten that struggles with bigger jumps or getting into their litter tray easily.

Read more on how to share your cat story.