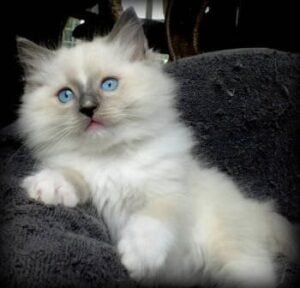 Ziggy at around 8 weeks

We will always remember the first time we saw our little man Ziggy on 8th of October 2011 He was placed in my arms as he snoozed and when he opened those glorious blue, I was smitten as was Joe my husband.

Up until recent years it was difficult to get Ragdolls and i knew about their amazing personalities which would be ideal for us. 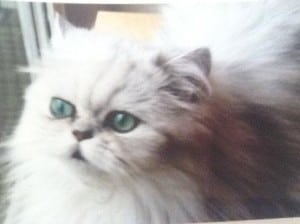 This is our darling Ozzie RIP gentle one, thank you for sending Ziggy to us to heal our broken hearts. X

Tragically Ozzie died on the 1st sept 2011 at only 5 years old. We were devastated and still miss the gentle soul that he was.

Although we have another Moggie called Boudica, who goes out, the house seemed dead and decided to look for a Ragdoll house kitten.
We were please there seemed more breeders out there this time, finally selected Raggucisnowdolls in Leicestershire in the UK. 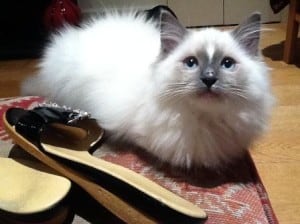 On the day I called Jo to see if she had any kittens, was the day she decided to let Ziggy go as intended to use him for stud and had made several posts saying he was not for sale as lots of people wanted him.

He really should have gone to someone else but knowing how devastated we were over Ozzie, she thought Ziggy would be purfect for us. What a wonderful thing to do as he has changed our lives in so many ways.

We knew that Ragdolls were amazing cats but still can't believe just how much. Joe says Ziggy is everything said on the tin and so much more, he is totally smitten! I get a little jealous at times as they clearly adore each other. 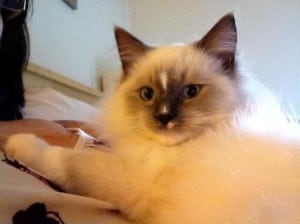 Having a cuddle x

Saying that Ziggy does spend equal amounts of his day with us, joes calls him Mr 50%. he keeps me company on our bed as I am some what disabled and some time under joes desk giving him "Foot cuddles".

He has a big sister Boudica a beautiful 7 year old fluffy moggie who can be a bit feisty at times but  she loves him too,  even though he has taken the "Top Cat" spot from her and chases her up & down the stairs all in good fun. She never tolerated that with our other kitty's. It's like she has become a kitten again and so sweet to watch them snoozing & playing together. 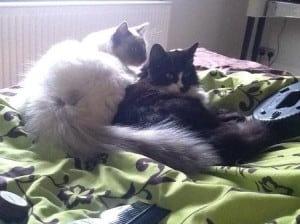 With Boudica who is 7. Ziggy was only 9 months here and is bigger than boudi

We are amazed how Raggi's follow you everywhere including the bathroom, don't think we have peed alone since we had him! He lays up against my shower door when I am inside and has to be with one of us at alltimes, it's so sweet.

If he is fast asleep on the sofa & we leave the room you can guarantee within in 10 seconds he will appear at your feet where ever you are crying as if to say " you left me!" 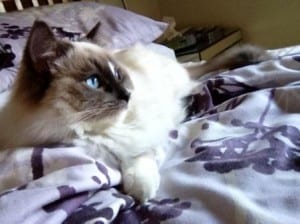 One of my favourite photos

A dear friend was helping me with some ironing last week and Zigs was fast asleep on the table near her, she went to get some more ironing in the next room and got the shock of her life when she turned around and saw Zigs staring up at her, it was hilarious!

All in all Ziggy has changed our lives and touched so many hearts of those who have met him. 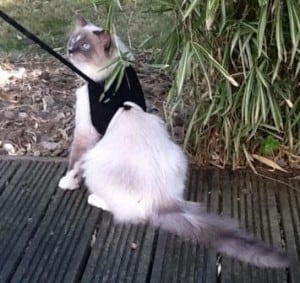 On his first walk in his new harness. That look says ok I get the jacket but don't think for one moment you can lead me around with that!! Lol

The postman and other visitors have photo's on their Mobiles as he always greets people at the door & we constantly hear " wow what a stunning cat, I have never seen one like him!"

It really makes us smile as we know how fabulous he is & feel so proud he is ours.

I could go on & on with all the reasons we love him so and tell lots of funny stories about him & Boudica and so I have created a FB page called " Ziggy the Ragdoll Wonder cat" and can't believe he has 362 friends already. There are lots of photo's & videos and would love some mote friends, especially Raggi's as only have a few of them. It would be nice to hear all about what they get up to.

Ziggy was 1 year old on 13th July and cannot imagine life with out him, god bless his little mittens! 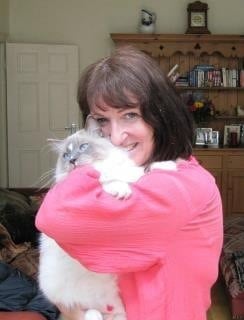 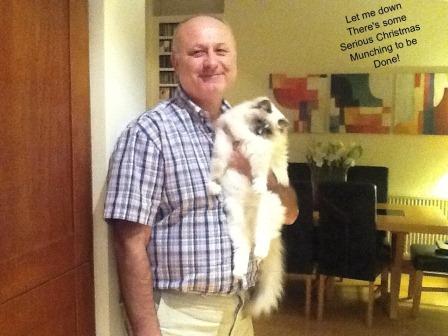 The two men in my life! 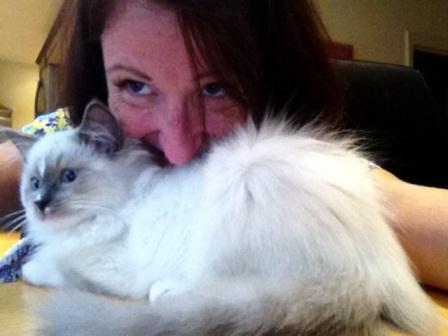 I wanted to just eat him and still do! Bet he will never say to me again Bite Me!