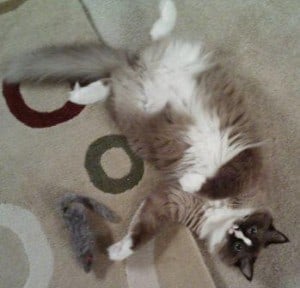 My name is Vanessa and I would like to present my cat Pooche pronounce POO-CHE exactly how it sounds to be Ragdoll of Week. I will explain how my ragdoll Pooche inspires me but first let me explain how I became a Ragdoll lover. I was watching Animal Planet a few years ago and seen the Ragdoll 101 episode. Afterwards, I started doing more research and came across the Floppycats Youtube channel. I love Floppycats channel and became obsessed with owning my own Ragdoll. I am a consumer that spends money wisely and went and purchased my Ragdoll from a breeder that was really cheap name Wendy Smith in Fairfax, VA. Later I will explain to you why that was a horrible mistake. Pooche was born March 08, 2012 and I picked him up from the breeder June 2012. Pooche resides in VA Beach with me and just recently turned one years old on March 8, 2013. 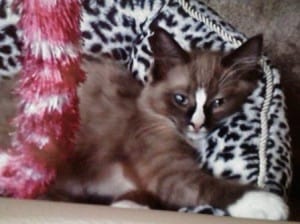 I was informed Pooche is a Mink Ragdoll he has a coat that feels like silk and I love laying my head on his fat tummy. So after bringing Pooche home I realized that he was infested with fleas. I contacted the breeder and she informed me that her dog gave fleas to the kittens and she was very sorry. It took me months and much money to treat my entire home and Pooche. I had to send Pooche to the Pet Hotel to have the house sprayed because every time I thought the flea problem was solved they would come back again. It was a miserable ordeal and I was initially going to get rid of Pooche because the fleas started attacking us both. My home has thick plush carpet everywhere and I thought I would never get rid of the problem if I kept Pooche. 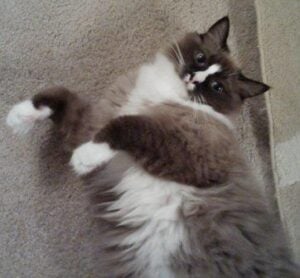 However, thank God I was patient because in due time, and vacuuming everyday the fleas ceased. As Pooche started to grow older I noticed he sometimes had difficulties breathing. It looked like he was coughing up a hairball but never coughed one up. I did my research online and came across cats with asthma. I concluded that Pooche had asthma but to be accurate I had to find out by a vet. During the time Pooche started having breathing difficulties I was a full time student in my last semester going to be an Occupational Therapist Assistant. Which means I didn’t have the funds for this expensive testing because being a full-time student I couldn’t work. However, I told myself I got through the fleas I was going to get through this. I did what any Ragdoll mother would do and came up with the money. Pooche was diagnosed with a heart murmur by x-ray. Now on July 15, 2013 in a few weeks he is going back to the vet to get an ultrasound done, another expensive test to find out more details about the heat murmur. 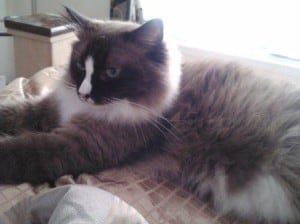 Doing my research online I am really scare because so many Ragdoll owners say that when their Ragdoll was diagnosed with a heart murmur a few years later their ragdoll instantly dropped dead from HCM. I pray to God it’s not HCM. The breeder I went to didn’t test for HCM. Royal Canine makes food for Persians and Maine Coons but doesn’t make any food specially designed for Ragdolls. Hopefully in the future you could expand your Ragdoll empire and make food especially for Ragdolls. So back to the reason I am contacting you, Pooche is the best thing that ever happened to me. He makes my life so happy. When I am studying for an exam he is by my side, when I get out the shower he is there, he is always waiting for me to come home by the door, he is beside me right now as I type you this, he loves to play hide and pounce, he also loves playing fetch. I can’t believe all the joy he brings me. 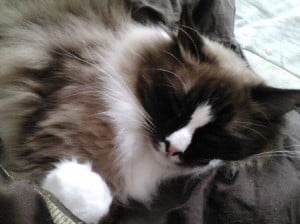 It has to be the breed because when I was younger we owned a cat however, Pooche is not a cat he is my friend, my Best Friend! Let me not forget to mention his cute, sexy attractive face. He is very handsome, I call him sexy feline sometimes….lol He is number one and I don’t know how long he will be around, hopefully for more years to come. I just recently made Pooche a Youtube channel too. It’s called Pooche Ragcat he has the Robo Fish, and I will be posting that experience soon. I purchased the Robo fish after watching your review at CVS. Jenny watch his Pit’r Pat treat video he really gets excited and listens when I pull these treats out.

9 thoughts on “Pooche – Ragdoll of the Week”