Our family adopted Willy, also known as, Sir William, The King, The Sir, The Buds, The Little Sir, or The Buddy, from the now closed Angelica Ragdolls, in 2016. His parents were champion showcats, and it certainly shows in his beautiful, thick coat, markings, and brilliant blue eyes. 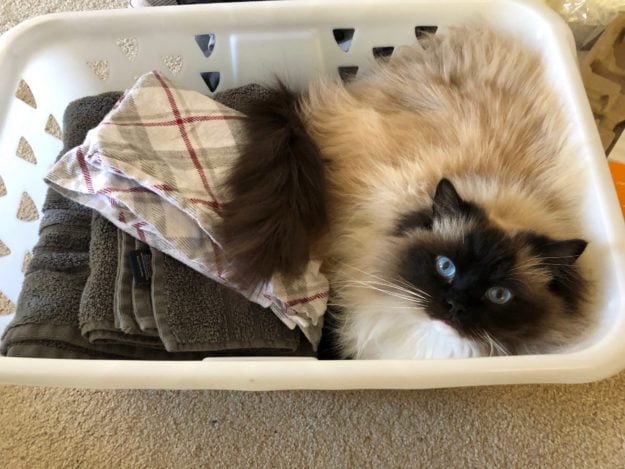 We had rescued cats for many years, but at around the age of 8, I started developing allergies to cats. But, as our family loves cats, we still really wanted to adopt one. So after our two older rescue cats died of old age, our mom did some research, eventually finding Ragdolls, who are said to be hypoallergenic due to their lack of an undercoat.

Some people are still allergic, but after visiting some Ragdolls, I found that thankfully, I was ok. My mom loves adopting older rescue cats, but decided to get a kitten to keep up with her two sons - me and my brother. We were nine and eleven when we adopted Willy three years ago. Willy was destined to be our cat. When we were choosing a cat, he had already been chosen. But, when his buyers came to get him, Willy hid under the couch and his brother was accidentally taken instead. They realized about a day later, but by then they had bonded with his brother, so they kept him instead.

Willy, the most gorgeous cat in the litter, was chosen yet again by a different buyer. However, when the next new owners came to get him, he hid again.

Thinking that he must have a nervous personality, they changed their mind, taking the cat we were scheduled to buy instead. When we went to get Willy, the last cat in the litter, he hid yet again, so we had to lure him out with a toy, and snatch him up into the carrier.

Despite his seemingly skittish behavior, after we got him he became the most calm, chill, regal cat I’ve ever seen. On the way home, he was completely silent, not meowing once.

He has this composure about him, the way he conducts himself, along with his large mane, that makes him seem so very regal and kingly. He often enjoys looking down on our kittens from a perch on the stairs, and he will sit with his back upright, like a little human. 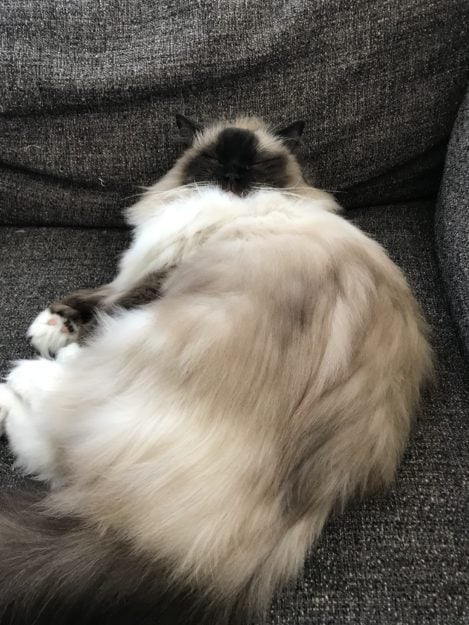 His regality seemed to cause him to feel above the concept of “playing”, though. Even when we first got him as a kitten, William had little interest in playing with toys, except for that first encounter, where he was still a bit hesitant.

Despite his anti-toy disposition, which some may call snobby, he still is a cat, so he loves catnip, and we have a selection of catnip toys for him.

If you own snobby cats, but you still want to play with them, I’d recommend “Da Bird” by Go Cat, particularly with the sparkler attachment. All our cats love it, even William!

In fact, our new little Ragdoll Magnus, will pick it up in his mouth, and carry it around, to pretend to hunt. They never get tired of it, and when Magnus carries it around, his sister Chi will chase him trying to attack and chew on the handle, resulting in endless enjoyment for everyone!

If you want to get your snob noble, a bed, it really depends. We got him this little box with a hole in the front from IKEA, and for the longest time he ignored it. Now, though, he spends much of his time sleeping in it, once his royal attention was brought to it by his little siblings.

But one thing we would definitely recommend is getting a scratching pad, even if it's just a cheap cardboard one. And if you don't have one, your couch will meet a terrible fate, so it’s definitely worth the cost.

In fact, the little cheap ones are especially loved, and there’s often quite a bit of competition for them, particularly the one William happens to have chosen for his seat! 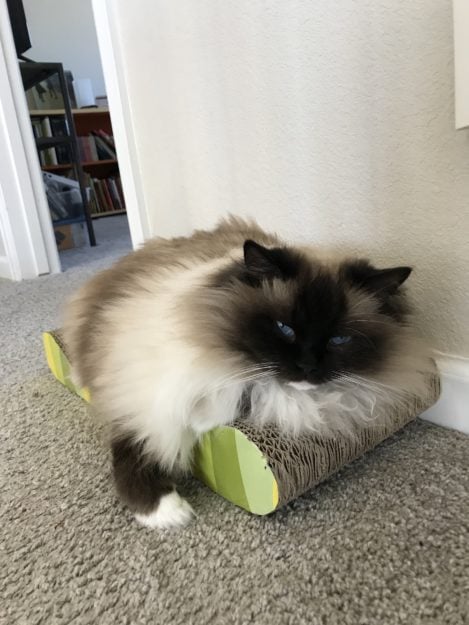 For his royal highness, we have a wide variety of water bowls, including two zen fountains with running water, specially made for cats, as they prefer running water. However we also have this little silver bowl, I believe made for shaving.

When The King saw it filled with clean water, he decided that it was a great chalice for his royal self, so ever since, it’s been the “King’s Water.” All the cats love that bowl, so whenever they are thirsty, they simply have to sit by it, and anyone nearby will immediately go running to refill it. We don’t know why they like the bowl so much, but they do. Maybe it’s the silver.

As for his name, or names, William got them in many places. When we got him, he already had the name Willy, which we planned to change. However, we quickly realized his name was a great pun; “Willy like his condo?” “Willy attack the toy?” Yes and No.

Later, we noted that Willy could be short for William, so he got that name next.

For the longest time, he seemed small, which he still is by Ragdoll standards: 8.5 pounds. That said, he is so voluminously puffy, one would guess he’s more like fifteen. Due to his small size, he acquired his next name, The Little Sir.

My dad gave him the names The Buds and The Buddy, because they would sit together while he worked as buddies.

The King, his most recent name, came when we got our kittens, and it comes from the fact that they both look up to him. Also, he is an incredibly grand cat, very kingly, and so he became the king of the cats. 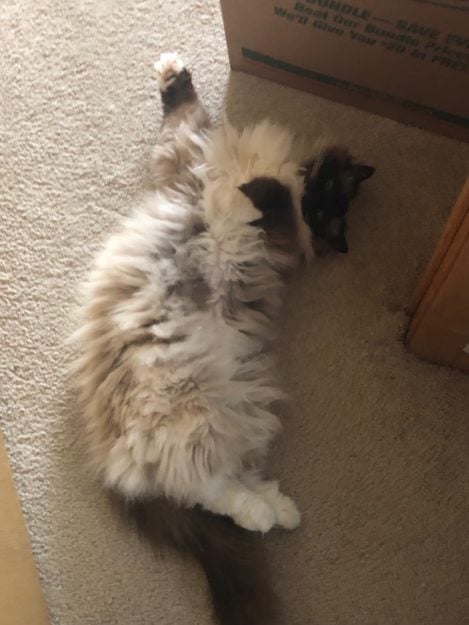 The most recent development is the addition of our kittens. On October 16th of this year, we got two ragdoll kittens, Magnus and Chi. They are half siblings, and they are energetic, curious, hilarious little fur balls. But tell Willy that, and he’ll beg to differ, or at least he did, for a while.

When we first got them, he wasn't amused. Despite his distaste for the newcomers, he would never scratch, bite, or hiss. In fact, he is the most peaceful Ragdoll, or animal in general, I’ve ever seen.

He won’t complain if you hold him like a baby, He was so docile that, when the kittens came, he, the full grown cat, ran and hid. Though he wasn’t the kitten’s biggest fan, the kittens are his.

They idolize him, follow him around, and try to sleep next to him. Magnus, the baby, even tried to nurse on him! Recently, after a few months, he’s warmed up to them, and even seems to enjoy their company. 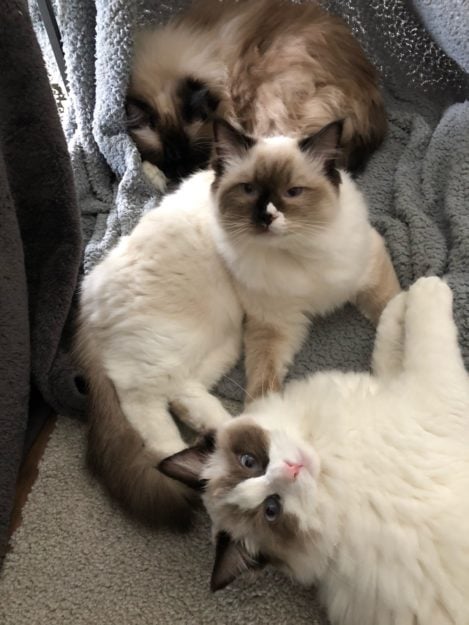 These days, Willy spends much of his time lounging, as most cats do. He loves watching our two kittens play, and even joins in. He now loves wrestling, chasing, and tackling the kittens, often being the initiator of their play-fights. He’s finally embraced his inner kitten!

Along with lounging in his favorite position, the cat-sausage, he sometimes enjoys lounging in tents made from blankets draped over human legs or chairs. He will also sometimes sit in our dinner table chairs, although the kittens are trying to monopolize the chair market. He’s often happy to join in, leaving only three chairs for our family dinners. We don’t mind though.

He’s not one to sit on laps, though on rare occasions he will, much to the envy of the rest of the family. 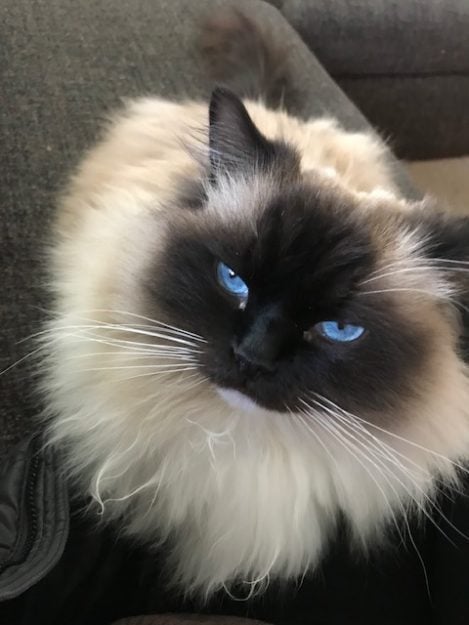 William is one of the sweetest, kindest, puffiest, calmest, (and definitely most regal!) cats we’ve ever had. He makes our lives better everyday.