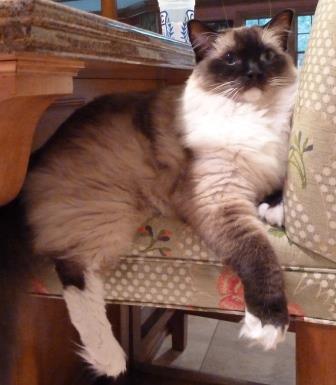 Though cats of any age can become infected with upper respiratory infections, kittens are the most susceptible population. Respiratory infections in young kittens can be especially serious because their immune systems may not be fully developed, making them more likely to develop complications, such as pneumonia. The other highly susceptible population of cats is those with compromised immune systems resulting from chronic disease or viruses such as the feline leukemia (FeLV) and/or feline immunodeficiency virus (FIV).

Treatment of a cat with an upper respiratory infection is usually symptomatic. Antibiotics are often prescribed to prevent or treat secondary bacterial infections. Nursing care is often required and involves keeping the eyes and nose open and free of any discharge. Nebulizers can be useful for these cats. L-lysine is often used, particularly in chronic cases, but has not been shown to be effective in treating upper respiratory disease. Anti-viral eye medications such as idoxuridine are sometimes used to treat cats with chronic eye problems.

Vaccinations against feline rhinotracheitis and calicivirus are available. These vaccines are considered core vaccines, vaccines that are recommended for all cats because of the ubiquitous nature of the viruses and the potential for serious disease caused by these viruses. Vaccines are normally started for kittens at 6 to 8 weeks of age and should be boostered every 3-4 weeks until the kitten is 16 weeks of age. For unvaccinated cats over 16 weeks of age, two dosages given 3-4 weeks apart are recommended.

Both intranasal and injectable vaccines against feline rhinotracheitis and calicivirus are available. There are advantages and disadvantages to each. However, these viruses are usually included in a three-way vaccine together with the feline panleukopenia virus and current vaccine guidelines published by American Association of Feline Practitioner recommend at least one injectable vaccine for panleukopenia.

Read Lorie’s other articles on Floppycats: